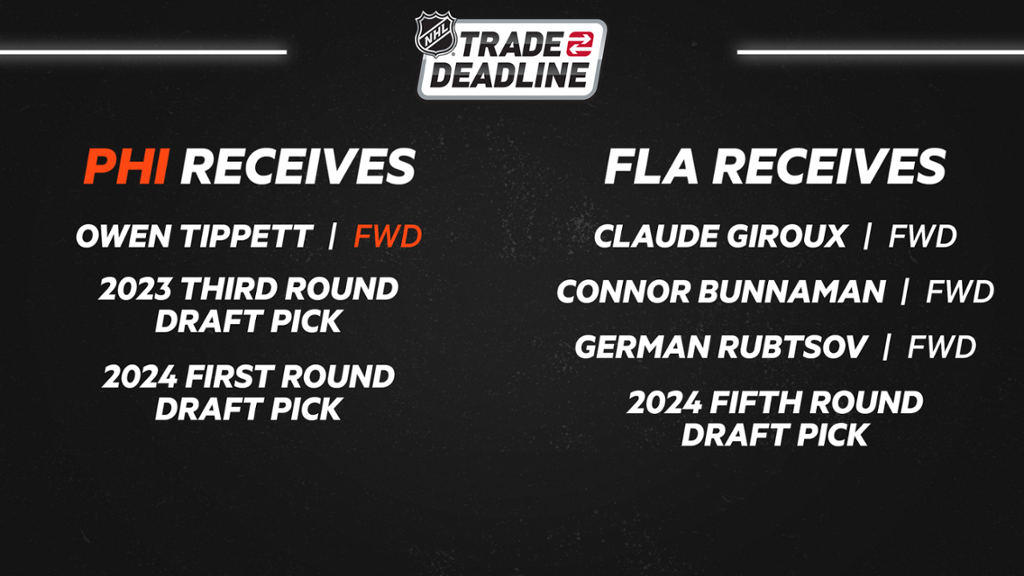 The Philadelphia Flyers announced today they have acquired forward Owen Tippett, a first round pick in 2024 and a third round pick in the 2023 NHL Entry Drafts in exchange for forwards Claude Giroux, Connor Bunnaman, German Rubtsov and the Flyers’ fifth round pick in 2024, according to President of Hockey Operations & General Manager, Chuck Fletcher.

“Any day that you trade your captain is a tough day, and with how much Claude has meant to this organization and how he has represented himself for 15 years, makes it all that more difficult to say goodbye. Claude is one of the best players to ever wear a Flyer uniform,” said Fletcher. “We’re very excited to have Owen join our team. He is a young forward who already has NHL experience and will bring power, speed and skill to our group. He is someone we expect to fit into our lineup immediately.”

“I’m really excited for this new opportunity to join a team, build with them and get a fresh start,” said Tippett. “I’m still working on trying to round out my 200-foot game, but overall I think I can bring offense, size and speed to the lineup. I’m really excited to get going and meet everyone.”

He has six goals and eight assists for 14 points in 42 games, and has averaged 12:32 of ice-time per-game for the Panthers this season. He has split time with the Florida’s American Hockey League affiliate, the Charlotte Checkers, where he has recorded over a point per-game with 18 points (6g-14a) in 12 games and has recorded a point in 11 of 12 games.

The 6-2, 207-pound forward has posted 33 points (14g-19a) in 94 regular season games in parts of three seasons with the Panthers, which includes making his NHL debut and appearing in seven games with Florida as an 18-year-old following his draft in the summer of 2017.

A native of Peterborough, Ontario, Tippett has represented Canada on several occasions which includes the 2019 World Junior Championships where he posted four points (2g-2a) in five games.

Giroux departs the Flyers after spending all 15 of his NHL seasons in Philadelphia, including the last 10 seasons as the team’s captain. He is the franchise’s longest serving captain in history in both length of time and with 715 games played wearing the “C”.

He ranks second in Flyers history in points (900), assists (609), games played (1,000) and is the Flyers all-time leader in overtime goals (11) and points on the power-play (339). During his tenure, he has finished the year leading the team, or tied for the lead, in points for eight of the last 11 seasons.

Selected in the first round (22nd overall) in the 2006 NHL Entry Draft by the Flyers, Giroux holds the Flyers record for the most Bobby Clarke Trophies as the Flyers’ most valuable player, winning the award five times (2011, 2012, 2014, 2016 & 2018). He is a seven-time NHL All-Star which is tied for the second-most in Flyers history, and became just the third Flyer to earn MVP honors joining Wayne Simmonds (LA-2017) and Reggie Leach (DET-1980).

Rubtsov was selected by the Flyers in the first round (22nd overall) of the 2016 NHL Entry Draft and has played parts of three seasons with the organization. He spent a majority of his time with the Phantoms where he recorded 29 points (10g-19a) in 93 games and appeared in four games for the Flyers.