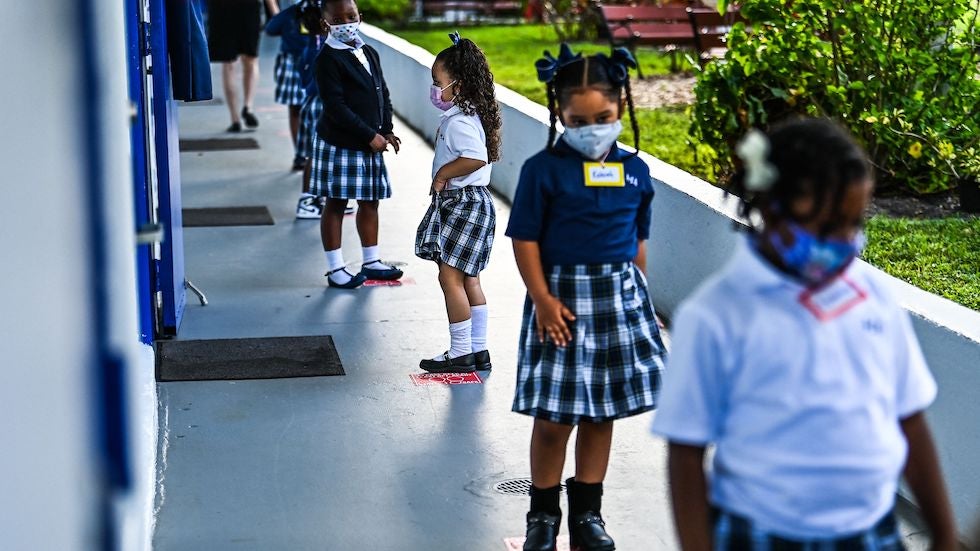 Ron DeSantisTampa-area school district imposes mask mandate after 10K students forced to isolate Overnight Health Care: US to start booster shots on Sept. 20 | Biden to require COVID-19 vaccination of all nursing home staff | Democrats embrace COVID mandates in governor races Biden calls out governors who oppose school mask mandates MORE‘s (R) order that parents should be given an option to opt their kids out of wearing face coverings in classrooms.

The board of Miami-Dade County Public Schools approved the policies on a 7-1 vote, according to The New York Times.

The board member who cast the only vote against the mandate, Lubby Navarro, said she was “not going to sit here and violate state law,” the Times noted.

Miami-Dade Superintendent Alberto Carvalho told the Florida Board of Education earlier Wednesday that he would wear any consequences from his recommendation to mandate masks “as a badge of honor,” the newspaper reported.

Other schools in the state have also been defying DeSantis’s wishes, causing multiple threats of legal action. This week, the state board of education threatened to penalize board members and superintendents of schools in Broward, Alachua and Hillsborough counties that are requiring masks to be worn.

“Right now, I think it’s really important to mask our children,” said Hillsborough County board member Nadia T. Combs, according to the Times, adding that she is “not here for the adults.”

The Wednesday meeting during which the Hillsborough board approved the mandate also caused an outcry among parents who believe their children should not be required to wear face coverings.

“I was appalled,” Buschner said, the Times noted. “They took my daughter’s safety away from her, and made it so that she has to be home.”

School officials, however, say they are working to ensure a safe return to school.

“We want our students back in person,” Vickie Cartwright, the interim superintendent of the Broward County Public Schools, told the newspaper. “We want to keep them there.”