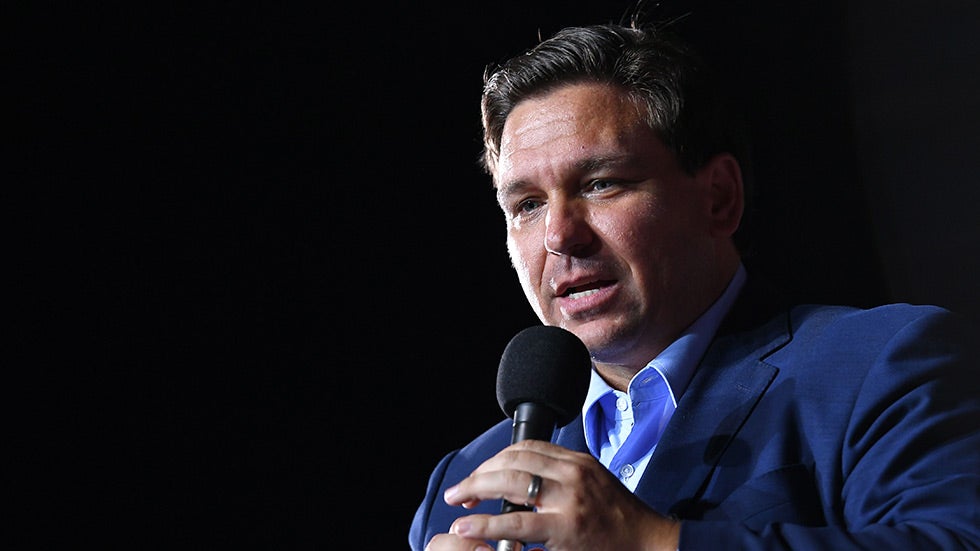 The backlash underscores the political perils posed by the pandemic, even for a rising Republican star like DeSantis, who is up for reelection next year and is seen as a possible contender for the 2024 GOP presidential nomination.

Florida is experiencing one of its darkest moments since the onset of the COVID-19 pandemic last year as the more contagious delta variant tears its way across the state.

As of Sunday, Florida was averaging more than 21,000 new infections each day, according to the Centers for Disease Control and Prevention’s Covid Data Tracker. More than 16,000 people are currently hospitalized, according to a Friday update from the Florida Hospital Association that showed a slight downward trend.

“Fingers crossed, we may be seeing the beginning of a downward trend in COVID-19 hospitalizations, but new cases remain near all-time highs, so it is much too early to declare victory,” said Florida Hospital Association President and CEO Mary Mayhew.

COVID-19 cases have surged in Florida despite a major push by the state for vaccinations. Florida currently ranks 20th among all 50 states and the District of Columbia in residents who have received at least one dose of a vaccine. More recently, DeSantis has taken to promoting a COVID-19 antibody treatment sold by the pharmaceutical company Regeneron as a way to fight the delta variant.

“COVID is going to be with us. You have tools to be able to best protect yourself,” he said at a news conference on Monday touting the antibody treatment. “Obviously, from a prevention perspective, the vaccination. But then if you are infected, particularly if you’re high risk, then what do you do? And this has just got to be something that everyone knows about.”

Still, DeSantis, who has been lauded by conservatives for his resistance to some of the strictest COVID-19-related measures, has largely gone with a hands-off approach to the outbreak. He backed legislation earlier this year effectively preempting local governments from imposing their own pandemic restrictions.

But the fight over pandemic-related rules and mandates has played out most prominently in the state’s public schools. DeSantis signed an executive order late last month banning school districts from implementing mask mandates — a move that has been the subject of increasing resistance from school boards, superintendents and many parents.

Roughly a dozen of the state’s 67 school districts have bucked DeSantis on the mask mandate ban. In recent days, more conservative counties have begun to make moves of their own.

On Monday, school board members in Brevard County — an area that DeSantis carried by nearly 17 points in the 2018 gubernatorial election — voted 3-2 to institute a 30-day mandatory mask policy.

The meeting came after a Friday ruling by a Florida judge allowing school districts to impose strict mask mandates, dealing a blow to DeSantis, who had argued that such decisions should be left up to individual parents.

One Brevard School Board member, Misty Belford, had previously voted against a mask policy before joining two other members in approving the mandate on Monday. She said that while she expects the DeSantis administration to appeal the judge’s ruling, the decision gave school board members “a small window to try to interrupt the spread” of the virus.

“We have a very serious crisis on our hands,” Belford said. “I think that we have a very small window of opportunity to do something to break this cycle and get some relief.”

Also on Monday, the superintendent of the school district in Lee County, a deep-red part of southwest Florida, announced a 30-day mask mandate for all students and staff beginning on Wednesday.

The decisions out of Brevard and Lee came on the same day that public schools in two other Republican strongholds, Sarasota County and Indian River County, began enforcing similar mask mandates for students. In each of the counties, students are able to opt out of the requirements with a signed note from a medical professional.

The DeSantis administration hasn’t taken the resistance to the governor’s executive order lying down. Despite the judge’s ruling, the Florida Department of Education on Monday followed through on a threat to withhold funds from two school districts — Broward County and Alachua County — that imposed mask mandates.

“We’re going to fight to protect parent’s rights to make health care decisions for their children,” state Education Commissioner Richard Corcoran said in a statement. “They know what is best for their children.”

To be sure, DeSantis remains well-liked among Florida Republicans more broadly. A Quinnipiac University poll released last week found his approval rating among GOP voters at an overwhelming 87 percent, while only 8 percent said they disapprove of his job performance.

But the Quinnipiac poll also suggests some trouble for DeSantis, with his overall approval rating falling below the 50 percent mark to 47 percent. That’s still better than the 41 percent approval he notched in a July 2020 Quinnipiac survey, but it’s still well below his pre-pandemic high of 59 percent in March 2019.

When it comes to his handling of the coronavirus pandemic, however, DeSantis’s approval rating drops even lower to 46 percent, while he gets 44 percent approval for his handling of Florida’s public schools. The poll also found that 60 percent of Floridians support masking requirements for students, teachers and school staff.

DeSantis’s administration is also caught in another high-profile battle against the cruise industry as a growing number of cruise operators unveil vaccination requirements for passengers.

The Republican-controlled state legislature passed a measure earlier this year at DeSantis’s urging prohibiting businesses from requiring patrons to provide proof of vaccination. Norwegian Cruise Line Holdings sued over the law, and a federal judge handed down a ruling earlier this month allowing the company to require vaccinations for its passengers.

DeSantis’s office has vowed to appeal the ruling. But that hasn’t stopped other cruise operators in the state from implementing their own requirements.

So far Disney, Royal Caribbean, Carnival and MSC Cruises have announced vaccine requirements. Those decisions were influenced by an emergency order by the Bahamas effectively barring cruise ships from stopping in the country unless all eligible passengers are vaccinated.