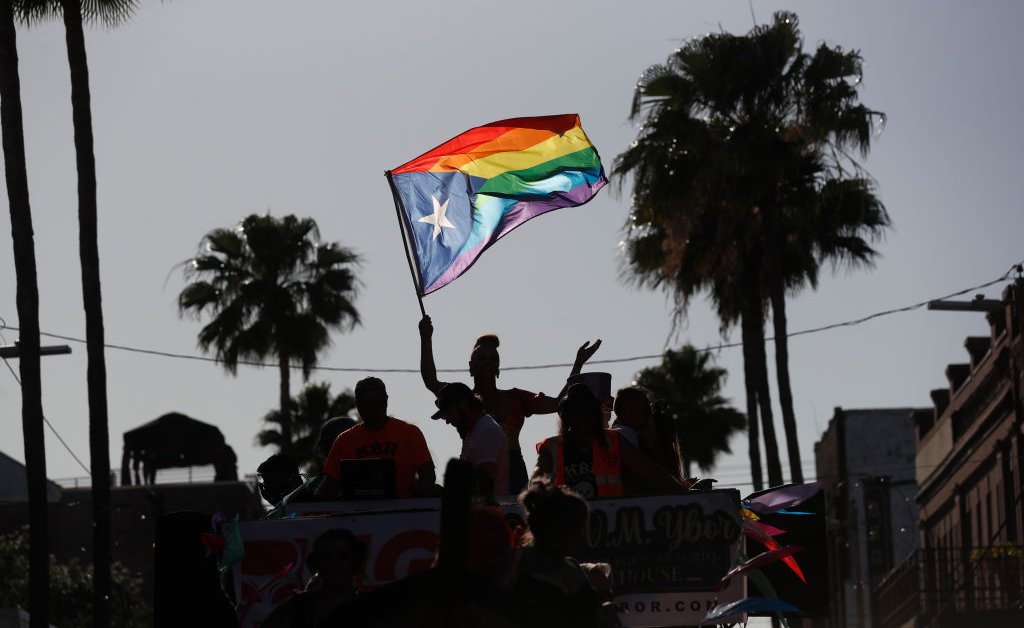 Florida’s “Parental Rights in Education Bill” has made the sunshine state ground zero in America’s culture wars. Signed into law last month by Republican Gov. Ron DeSantis, the bill prohibits discussion of sexual orientation and gender identity in the state’s public schools in kindergarten through the third grade. It also allows parents to sue school districts that expose their children to material that is “not age appropriate.” An earlier version of the bill required teachers to disclose the students’ sexual orientation to their parents after learning that they were not straight. Critics of what they call the “Don’t Say Gay” bill fear that it will end the teaching of LGBTQ history in Florida’s public schools and expose the schools to a flood of lawsuits. Critics also see the bill as an attempt to weaponize the idea of parental rights to marginalize LGBTQ people, a point echoed by the White House.

Since becoming law, the controversy over Florida’s parental rights bill has metastasized by pitting DeSantis against the Walt Disney Corporation, one of Florida’s largest private employers. Disney officials have publicly opposed the new law, arguing that “it could be used to unfairly target gay, lesbian, non-binary and transgender kinds and families,” and called for the courts to invalidate it. In retaliation, Florida’s legislature, acting on orders from DeSantis, revoked a law that for decades had allowed Disney to operate its businesses in Florida with minimal intervention from local authorities. The controversy in Florida has also gone national with similar bills being considered by the legislatures of Arizona, Indiana, Kansas, North Carolina, Oklahoma, South Carolina, and Tennessee.

In trying to understand why a purple state like Florida finds itself in the current predicament, very little has been said about the state’s long history as America’s breeding ground for toxic anti-gay politics and how this history may have informed the parental rights bill. Instead, much of the attention has gone to the presidential ambitions of DeSantis, an unabashed culture warrior. “The state has become an unlikely laboratory for right-wing policy, pushed by a governor with presidential ambitions, noted the New York Times. The lack of any meaningful discussion of Florida’s dark and painful LGBTQ history is not surprising, however. It has never been subject to any formal reckoning. In the absence of such a reckoning, history continues to repeat itself in Florida with grave consequences for the state’s reputation, the welfare of its LGBTQ citizens, and even for the American nation as a whole.

Florida’s renown for homophobic attacks goes back to the now-forgotten Florida Legislative Investigations Committee, also known as the Johns Committee, a witch hunt rooted in racism, homophobia, and anti-communism. Named after influential state senator and former Florida governor Charley Johns, this ignoble body spent the years of 1957 through 1963 outing, persecuting, and intimidating people suspected of being gay at Florida’s state universities. This was part of the Southern resistance against school desegregation triggered by the Supreme Court decision in 1954 of Brown v. Board of Education. The hope was to find communists lurking behind desegregation and use that information to provide cover for Florida’s resistance. But after that mission failed, gays and lesbians became the target. This effort culminated with the release in 1964 of the report “Homosexuality and Citizenship in Florida,” also known as “The Purple Pamphlet” because of its lurid content. It noted “the extent of infiltration into agencies supported by state funds by practicing homosexuals.” Before the Johns Committee was disbanded, in 1965, hundreds of Floridians were prosecuted and charged on the basis of their sexuality. The interrogations were conducted in private and those prosecuted were denied legal counsel.

Decades after the Johns Committee came Save Our Children, a 1977 anti-gay rights crusade led by Anita Bryant, a country music singer and runner up to the Miss America title. Widely-recognized as the first organized opposition to gay rights in the United States, this notorious extravaganza of lies, insults, and conspiracy theories about homosexuals successfully cast gay men as pedophiles and predators in overturning an ordinance enacted by Dade County banning discrimination in housing, employment and public accommodation on the basis of sexual orientation. Throughout the repeal campaign Bryant routinely referred to homosexuals as “human garbage,” while criticizing the ordinance “as an attempt to legitimize homosexuals and their recruitment of our children.” In ads running in Dade County newspapers Bryant contended that “the recruitment of our children is absolutely necessary for the survival and growth of homosexuality—for since homosexuals cannot reproduce, they must recruit, must freshen their ranks.” When put to Dade County voters, the ordinance was rejected by a 2-1 margin.

Save Our Children’s legacy is dark and far-reaching. The crusade prompted Florida’s legislature to enact the nation’s first ban on gay adoptions, even though at the time no gay adoption had taken place anywhere in Florida. It also contributed to Florida becoming one of the last states to legalize homosexual sex; it only did so in 2003 when the Supreme Court overturned the state’s banning sodomy, alongside the sodomy laws of 13 other states, in the Lawrence v. Texas decision. Bryant’s tactics were also emulated across the United States, occasioning a wave of gay-rights defeats in other states, including restoring Arkansas’ anti-sodomy law and banning gays and lesbians from teaching in public schools in Oklahoma. Bryant’s anti-gay crusade also help give rise to the Christian Right by ushering in the Moral Majority, whose founder, televangelist Jerry Falwell, famously issued a “declaration of war on homosexuality” in 1979. Bryant’s tactics also inspired dozens of state referenda banning same-sex marriage between 1998 and 2012. Even the fight over the parental rights bill bears the imprint of Save Our Children, as can be seen in the DeSantis administration’s labeling of those opposed to the bill as “groomers.”

With the 2016 bloody massacre at the gay nightclub Pulse, in the city of Orlando, Florida gained a reputation for homophobic lethal violence. Forty-nine people, mostly young Hispanic males out enjoying Latin night, were killed and 53 more were wounded. This was the worst attack on the American gay community and one of the biggest mass shootings in American history. Understandably, as reported in The Washington Post, Orlando area teachers “worry they might not be able to discuss the Pulse nightclub shooting in the classroom if the measure passes. Others wonder how they would respond when a student wants to talk about their sexual orientation.” Florida teachers also worry that the bill will undo all the work that has been done across the state to create safe spaces for LGBTQ students after Florida’s public schools became some of the safest and friendliest for LGBTQ students in the country.

In failing to reckon with its dark history of LGBTQ discrimination, repression, and violence, Florida’s experience mirrors that of the U.S. as a whole. LGBTQ Americans are still waiting for an acknowledgement from the Lavender Scare, a mid-century witch hunt of federal workers suspected of being homosexual triggered by President Dwight Eisenhower’s 1953 Executive Order 10450 banning “perverts” from working in the federal employment. It resulted in thousands of homosexuals or suspected homosexuals losing their careers in the federal government, with some confined to mental institutions, especially Washington DC’s St. Elizabeths Hospital, to undergo traumatic treatments such as lobotomies to eradicate same-sex attraction. There also has been no acknowledgement for “Don’t Ask Don’t Tell,” the Clinton-era policy that allowed gay men and women to serve in the military as long as they kept their sexual orientation a secret. Before being lifted by President Obama, in 2011, DADT had caused the dismissal of some 10,000 service men and women, some of them in critical positions, such as doctors, jet pilots, and Arabic translators.

Ending the amnesia surrounding anti-gay repression and violence has in recent years emerged as a new front in gay activism, and this offers hope for restoring the historical memory of attempts by Florida and other localities to systemically oppress LGBTQ people. Abroad, Germany has paid reparations to the victims of the “Gay Holocaust,” the thousands of gay men who perished in Nazi-era concentration camps. The United Kingdom has issued a posthumous pardon to anyone convicted of “gross indecency,” a charge that for centuries allowed for the prosecution of homosexuals. Spain has erased prior convictions of homosexual offenses. At home, the New York Police Department issued an apology in 2018 for the violent raid of the Stonewall Inn, the catalyst of the Stonewall Riots. In 2020, California Gov. Gavin Newsom introduced a policy by which people convicted by laws that criminalized homosexual conduct could receive a pardon and restore their reputation. Newsom’s first pardon went, posthumously, to Bayard Rustin, the civil rights leader and confidant of Martin Luther King Jr. In 1953, Rustin was convicted of “sex perversion” after he was caught having sex with two men in a parked car in Pasadena. He spent 60 days in prison at Los Angeles County jail and was forced to register as a sex offender before returning to New York.

Inspired by the British example, this past June a resolution was introduced in the U.S. Senate to consider an apology for past anti-LGBTQ discrimination. No apology can undo the harm caused by homophobic laws and their legacy. But it is not inconsequential either. Apologies and other reparative measures can serve to acknowledge past wrongdoing and to restore dignity to the victims. More importantly, they can break the cycle of the past informing the future. It is doubtful that the acrimonious debate over the teaching of sexual orientation and gender identity taking place in Florida today would be happening had the state taken steps to reckon with its shameful LGBTQ history.