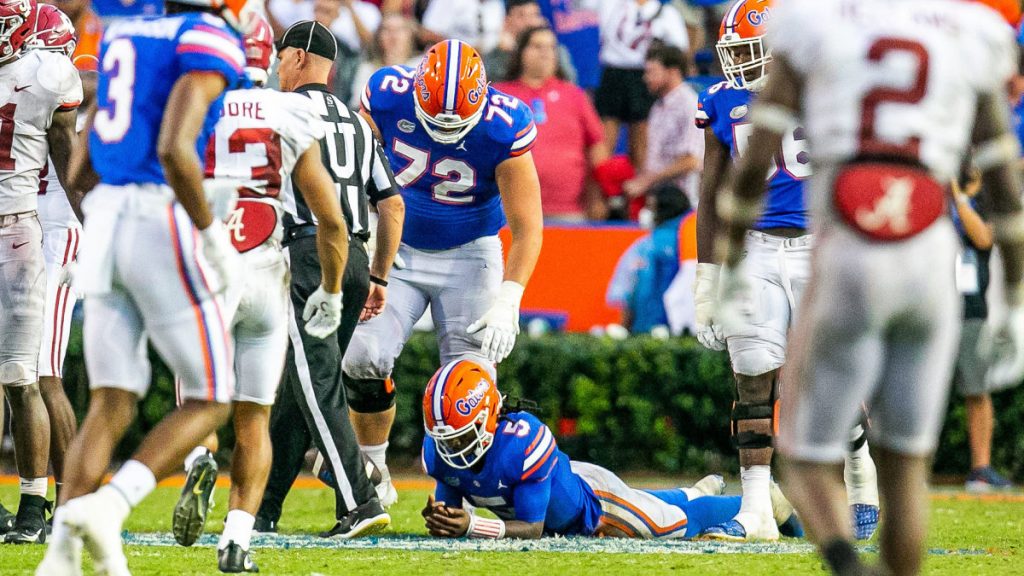 Three yards separated Florida from, maybe, the biggest win in years. A thundering upset was there. A historic toppling. A stunning victory. It was all there, right there—three yards away.

It seems so simple until you hear more about those three yards and that they were against one of the game’s greatest defensive minds and his No. 1-ranked Alabama team.

Of all the silly things, this top-15 grudge match between the top-ranked Crimson Tide and the No. 11 Gators came down to a two-point conversion that would tie the game. Florida gained two yards. It needed three.

They say this sport is a game of inches.

Alabama out-inched Florida, barely, but it did, in a 31–29 victory in a classic battle in a rollicking Swamp on a day that, in many ways, ushered in the return of big-game, on-campus college football pageantry.

The fifth-largest crowd in the history of The Swamp was on hand for this one—a sweaty 90,887 on a sticky day in this college football mecca. Fourteen-point underdogs, they saw their team get down 21–3 after the first quarter, claw their way back with a stunning rushing performance and nearly shock the college football world with the comeback of comebacks.

At one point, the Gators amassed three straight touchdown drives of at least 10 plays and 75 yards, and one of them was a 99-yard haul that had Nick Saban physically throwing up his hands in the postgame news conference. They ran for 258 yards on the Tide, converted five third downs and a fourth down and averaged more than six yards per play.

And yet, here they were, losers—like so many who tangle with the Tide.

“Margin for error in this game is so small,” Mullen said afterward.

How small? Inches, of course.

Mullen’s team was only forced into a position to go for two because its kicker, in the second quarter, sailed an extra point just inches right of the upright. The Gators, it should be noted, were 59 of 59 on extra points last season.

Two quarters later, with 3:10 left, the game-tying two-point play unfurled. Executing a zone read, QB Emory Jones rode his running back, Malik Davis, into the teeth of the defense, let go of the ball into his belly and then watched as Davis toppled to the 1-yard line—about 12 inches short.

Mullen says two Florida players missed assignments. One aligned wrongly and another blocked the wrong way. He wouldn’t get into specifics.

The play is simple enough, though. Jones reads the number of players in the box, an old football term for the imaginary eight-yard rectangle from linebacker to linebacker. Jones hands to his running back for the dive play or keeps it outside. According to Saban, the QB actually made the right read, as the Tide hadn’t loaded the box in this situation.

“That one, we played split safety and our guys did a good job of stopping the dive,” Saban said. “(Jones) rode the guy so the runner couldn’t hit it.”

And there was Davis collapsing to the turf, inches from a game-tying jab.

It wasn’t over, of course. In fact, minutes later, Alabama itself was faced with having to gain two yards on a third down—about 72 inches, to be exact—to extend a game-securing drive. It got two and a half yards on a rushing play.

The game of football has evolved into a pass-heavy, spread-’em-out scoring frenzy of a sport. But lest we all not forget that this wacky game is often decided by whether one team moves enough humans out of the way for the other to run the ball. And while Florida had success at doing so for much of the game, in the end, it didn’t.

And so on lives one of the most incredible streaks in the history of college football. Saban has won 32 consecutive games against teams from the SEC East, a run that dates back to 2010, when the Tide lost to a Steve Spurrier-coached team with a quarterback named Stephen Garcia (yes, that one!).

It’s a remarkable streak and one that has never been in more jeopardy than Saturday. The Gators’ two-point margin is the closest an East team has gotten during the division’s skid.

What Florida did Saturday night is no small feat. Consider that Alabama has won 17 straight games by a margin of 26 points. Consider that no team has come within single digits during that stretch—except for Florida, twice. The Gators lost, 52–46, in last year’s SEC championship game.

It’s not lost on Mullen.

“Talked about it when I got here, wanting a team that can compete for championships on a consistent basis,” he said. “To do that, you’re going to have to beat Alabama. What’s the margin? Last year was six points. This year was two. Hopefully we see them again.”

Maybe the Gators exposed some cracks in the vaunted Tide. It’s only the third time under Saban that Bama has allowed three rushing touchdowns. Florida gashed the Tide on the edge with the speed option, running it no fewer than a dozen times.

In the fourth quarter, Saban even signaled a lack of confidence in his defensive crew. It was clear as day. With a chance to go up by eight points with a field goal, he elected to attempt a fourth-and-goal from the 2-yard line. The try never got off the ground—a false start pushed the Tide back and the field goal team came on.

The defensive lapses are a confidence-boosting message to the rest of the league, and maybe the country. Look here, maybe Alabama can be beat. It sent Saban into a mild fury afterward over his unit’s lack of execution.

“We didn’t get off the field on third down,” he bemoaned.

But, hey, it was a fun one. Campus was abuzz. The city was alive.

At the start of the fourth quarter, Gators fans belted out their rocking rendition of Tom Petty’s “I Won’t Back Down.” They waved their lit phones, sung at the top of their lungs and turned Ben Hill Griffin Stadium into a concert hall.

SEC commissioner Greg Sankey had a front-row seat for it, posted up in the press box around a group of reporters, a glazed look across his face as the rendition finished.

“Sure feels like the unofficial return of normal college football, huh?” he was asked.

The pageantry was back. The festivities. The bands. The cheers.

And of course, the Tide winning this silly game of inches.

• Can Cincinnati Lift Group of 5 to New Heights?
• Big Ten–ACC–Pac-12 Alliance Could See Season-Long Matchups
• Which Coaches Should USC Target?

Sports Illustrated may receive compensation for some links to products and services on this website.