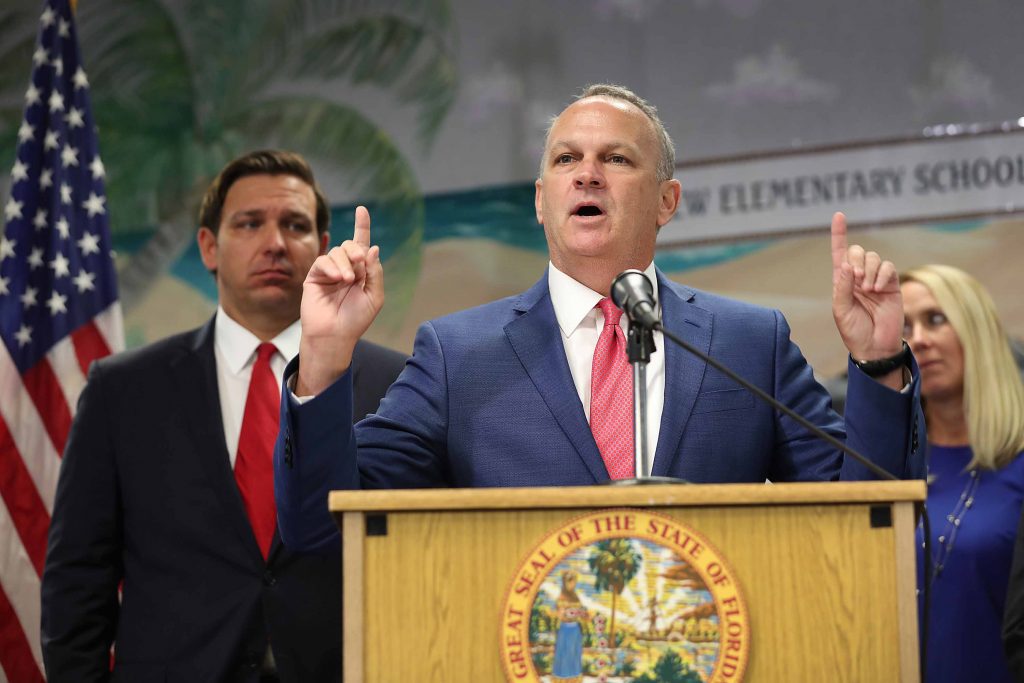 School leaders in Alachua County and Broward County, who are resisting DeSantis’ order banning mask mandates, now could face a range of possible punishments for defying the DeSantis administration, which has taken a hard line against enacting additional Covid-19 precautions despite a record-breaking surge in cases and hospitalizations brought on by the Delta variant.

And yet even as these counties were hounded for opposing DeSantis, school leaders in other counties — including Miami-Dade, Florida’s largest school district — are considering their own mask mandates to battle the coronavirus, signaling that the weekslong battle over face coverings in Florida is far from finished.

“We have districts who are picking and choosing what laws they want to follow,” Florida Education Commissioner Richard Corcoran said Tuesday during a virtual education meeting.

Florida, along with states like Texas, Arkansas and Tennessee, has pushed to block local mask mandates in schools just as the new in-person education year is beginning, breaking with guidance from the Centers for Disease Control and Prevention recommending face coverings indoors for children regardless of vaccination status. The ongoing conflict over face coverings has quickly become one of the most contentious fights amid the surge in Covid infections, with parents fighting with school officials and the White House trading barbs almost daily with DeSantis and Texas GOP Gov. Greg Abbott, who tested positive for Covid on Tuesday.

DeSantis, who is in the midst of a 2022 reelection bid, wants parents in Florida to have the ultimate say on students wearing masks, a position the overwhelming majority of school districts have fallen in line with for 2021. The DeSantis administration, which has rejected lockdowns and making face coverings mandatory, maintains that masks don’t make enough difference in school-age children to be required through blanket statewide or local policies.

But the Delta strain of Covid-19 has forced some school districts to reconsider their position on face coverings, even in the face of DeSantis threatening to withhold state dollars. Already, thousands of students in Florida remain in isolation because they may have come into contact with someone with Covid-19 and at least three Broward County educators died last week from the virus.

At Tuesday’s emergency meeting, state Board of Education officials grilled Alachua schools Superintendent Carlee Simon over her district’s policy requiring masks for students unless approved by a medical professional. Board chair Tom Grady, for one, walked Simon through a hypothetical scenario about how the superintendent would respond if educators refused to teach some subjects.

Simon, though, stood by Alachua’s mask mandate, which the state board argues is violating the rules created by the DeSantis administration.

“If the goal is getting students face to face, then the masks are what helps us get there,” Simon told the board.

Leading up to the meeting, the districts pushing mask mandates in schools were at risk of losing hundreds of thousands of dollars in state funding — an amount tied to the school board and superintendent salaries. The Biden administration said last week that federal Covid-19 relief could be used to backfill school budgets that get slashed for requiring face coverings, a move that angered state leaders like Corcoran.

Corcoran took shots at President Joe Biden on Tuesday, urging the board to disregard the U.S. Department of Education’s decision to intervene in the local mask scrap.

“The entire international world gets that they are asleep at the wheel,” Corcoran said of the Biden administration.

With the threat of losing state funds watered down, the state Board of Education, led by Grady, outlined a host of possible penalties schools could face for mandating masks but held off issuing any sanctions. The state, Grady said, could ultimately remove school officers or submit a report to the state Legislature to push lawmakers to take action against local school boards.

Grady, a former financial regulation commissioner, also objected to recent media appearances by school leaders in Alachua and Broward. He suggested the Department of Education could file a public records request to gauge if schools used state money on public relations or political purposes.

Other state board members raised concerns that local education officials could decide to disregard rules they simply don’t want to follow.

Still, even though Alachua and Broward are staring down possible sanctions from the Department of Education, other school districts are on the cusp of following their lead.

Hillsborough’s school board is meeting Wednesday to reconsider propping up a mask mandate after nearly 6,000 students were forced to quarantine from local campuses since last week. Schools in the county, enrolling nearly 219,000 students in the Tampa-area, reported 1,169 Covid-19 cases among students and staff since Aug. 9, including 487 cases on Monday.

Hoping to avoid a similar start to the fall, the Miami-Dade County school board is also meeting Wednesday with Superintendent Alberto Carvalho, who is leaning toward a mask mandate at the advice of the district’s medical experts.

“I can safely and comfortably say, regardless of future potential accusation or consequence, that my mind is pretty made up on the way to move forward,” Carvalho said at a public health task force meeting Monday.

DeSantis’ push to block local school mask mandates is facing numerous lawsuits, including one filed by parents that is scheduled to be heard Thursday in circuit court. The U.S. Education Department maintains that the Republican governor’s stance against mask mandates, which goes against CDC guidance for schools, “puts students and staff at risk.”

Similar battles over masks are playing out in schools in Houston, Dallas and Austin, which are requiring masks even though face covering mandates are banned by Abbott.

In California, however, Gov. Gavin Newsom has imposed some of the country’s strictest school precautions, including a first-of-its-kind teacher and staff vaccine requirement and a universal mask mandate ahead of CDC guidance that suggested the same. But he has faced blowback from Republicans who accuse him of government overreach.

“This is an emergency,” Fried told reporters Tuesday. “And instead of focusing on how to help, our governor and commissioner of education are spending time trying to figure out how to punish school districts that have asked their students to wear masks.”

Mackenzie Mays contributed to this report.