Florida sheriff calls shooting suspect a ‘coward’ after arresting him 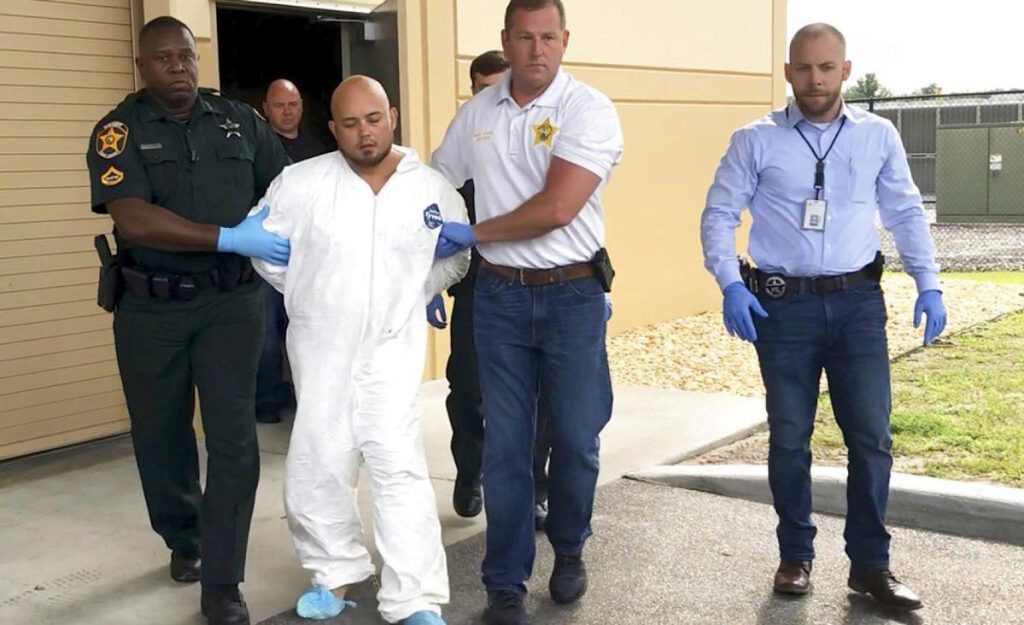 A Florida sheriff called a former Marine sharpshooter a “coward” after the quadruple murder suspect surrendered to authorities with his hands up after a prolonged firefight.

Polk County Sheriff Grady Judd revealed authorities had spoken to two residents in Brandon, Florida, who said that a man they did not know spoke to them. The man said he was on a mission for God, and he needed to speak to the resident’s daughter named Amber. Both residents denied having a daughter named Amber and told the police of the strange incident.

Authorities spent the next nine hours looking for the man. Police heard gunshots early on Sunday morning and found a truck that was on fire and glow sticks creating a path. Police followed the path and found a man wearing camouflage and full body armor. The man retreated into a house, where authorities could hear more gunshots, a woman screaming, and a baby whimpering.

A shootout between the police and the shooter followed, forcing the shooter to retreat into the home. He eventually surrendered, unarmed, to the police.

“It would have been nice if he would have come out with a gun,” Judd said in a news conference. “We would have shot him up a lot. But he didn’t because he was a coward. When someone chooses to give up, we take them into custody peacefully.”

Judd revealed the shooter was named Bryan Riley. Riley, 33, is a former Marine sharpshooter and served in Iraq in 2008 and Afghanistan in 2009.

Judd said Riley killed four people in his attack, including a 40-year-old resident named Justice Gleason, a 33-year-old woman, and a 3-month-old baby that the woman was holding. Another woman Riley killed was 62 years old and is believed to be the grandmother of the baby. Riley also killed the family’s dog, Diogi.

Another victim, an 11-year-old girl, was still alive but had at least seven bullet wounds and was rushed to Tampa General Hospital. Judd said there is no known connection between the shooter and his victims.

CLICK HERE TO READ MORE FROM THE WASHINGTON EXAMINER

Riley’s girlfriend told the police that he had been suffering from PTSD and was becoming more erratic lately. She noted that Riley had previously told her that he was sent on a mission by God and had been stockpiling supplies, which he claimed were for Hurricane Ida victims.

Judd said that after police arrested Riley, he told police he had been taking methamphetamine.