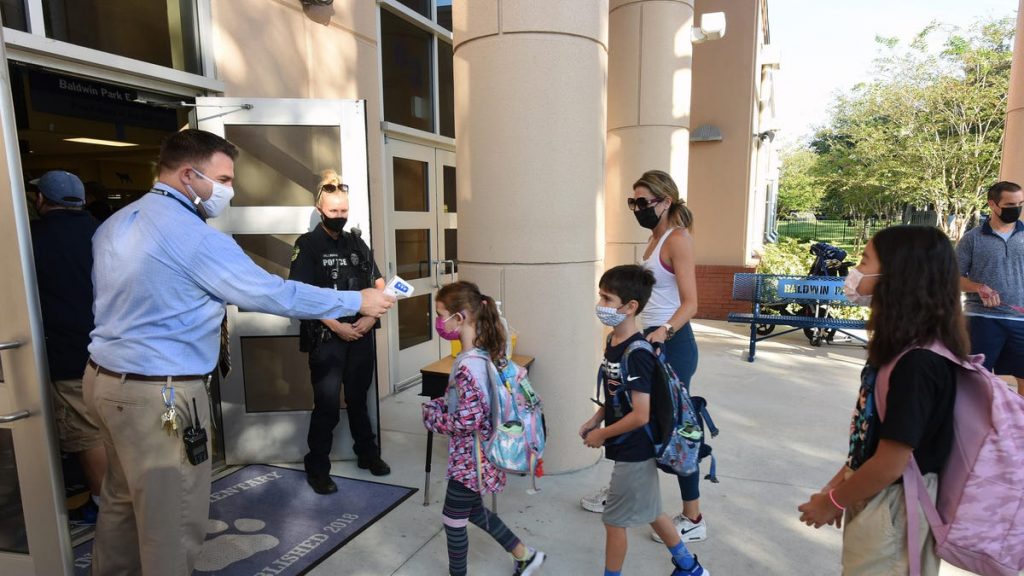 Florida Education Commissioner Richard Corcoran issued memos to the State Board of Education recommending 11 school districts be punished for instituting strict mask mandates that violate the state’s ban on them.

Having “disagreements” with the state policy, which requires schools to let parents opt out of mask orders, “does not provide a school district with a basis to violate” it by imposing stricter mask rules, Corcoran wrote.

The U.S. Department of Education created a new grant program to dole out money to schools that have had state funding withheld because of their Covid-19 mitigation measures, called Project SAFE, and has given funds to at least two Florida districts so far.

The school board will meet Thursday to determine whether to issue punishments against the 11 districts, which include those in Florida’s biggest cities like Miami, Orlando, Tampa, Tallahassee, Palm Beach and Jacksonville.

At least one of the counties facing punishment, Sarasota, has already lifted its mask mandate as the Covid-19 positivity rate has dropped, but under the district’s policy it could be reimposed if cases rise again.

“The federal government will not be allowed to circumvent our laws and we will never cede the moral high ground of fighting for the rights of parents to make personal and private health care decisions for their families,” Florida education department spokesman Jared Ochs previously told the Miami Herald after Broward County was awarded a federal grant, saying the state would “continue to consider all available legal options … to ensure each district fully complies with the law.”

“It remains deeply troubling to see state leaders putting politics ahead of the health and safety of our students, and those leaders should be supporting educators for doing the right thing – not punishing them,” U.S. Department of Education spokesperson Rachel Thomas said in a statement to Forbes Tuesday, adding that “actively undermining actions that help stop the spread of Covid-19” is an “abdication” of state leaders’ “duty to keep our children safe.” “The Biden administration remains committed to lifting up and supporting local education leaders that are stepping up to protect students from Covid-19 and will continue to do so.”

Florida is one of at least 12 states that have enacted some form of ban or restriction on school mask mandates, though most states’ policies have now been at least temporarily struck down in court. Multiple studies have shown mask mandates are effective at reducing Covid-19 transmission in schools, and the controversy over the policies comes as the highly infectious delta variant has left children ineligible for Covid-19 vaccines especially vulnerable. Florida’s mask restrictions have been particularly controversial as the state doubled down on its opposition to masks while Covid-19 cases there surged, and while its mask mandate ban was initially struck down in court for not complying with state law, an appeals court put the policy back in effect while the litigation plays out.

The U.S. Department of Education has also opened civil rights investigations into Florida and other states’ policies against school mask mandates, which will focus on whether they are violating the rights of children with disabilities. Those investigations are unlikely to result in federal funding being revoked, but there could be other consequences like the cases being referred to the U.S. Department of Justice for prosecution.

In addition to fighting federal grants that go directly to schools, the U.S. Department of Education said Monday Florida is also the only state that still doesn’t have a plan for how it intends to use its federal Covid-19 relief funds for schools. The federal government said the state still has not unlocked $2.3 billion in funding because it hasn’t yet told the Education Department how it will use the money, which Florida Gov. Ron DeSantis’ office claimed to CNN is because “at this time, no district has articulated a need for funding that cannot be met with currently available resources.”