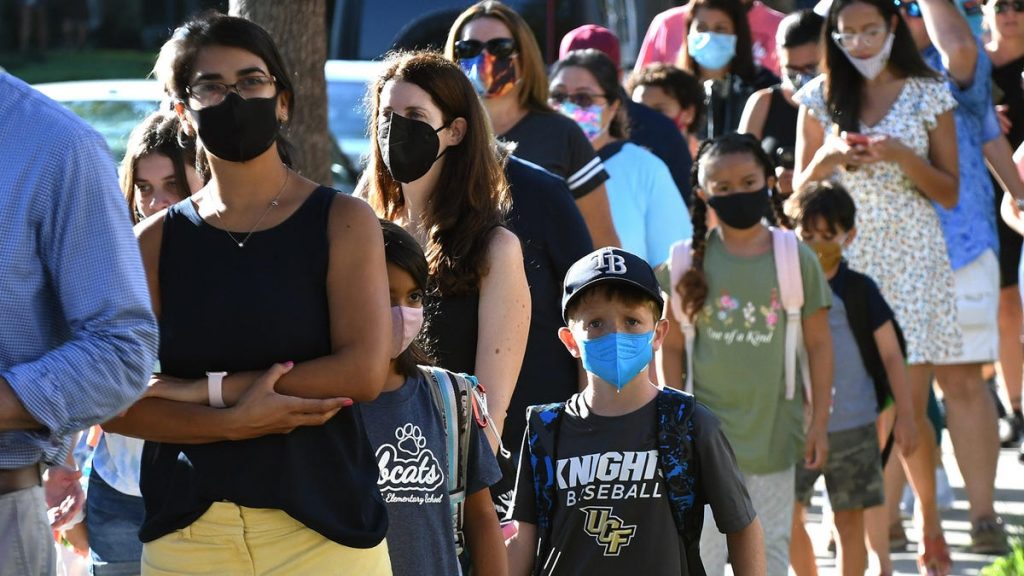 The Florida State Board of Education voted Thursday to withhold funds from eight school districts that have imposed mask mandates in violation of a state-level ban on them—and moved to thwart the U.S. Department of Education’s plan to assist those districts through federal grants that would make up for the lost money.

The board accepted recommendations from Education Commissioner Richard Corcoran to withhold state funds in an amount equivalent to school board members’ salaries—as it’s already done for several districts—as well as funding equivalent to any amount the district receives in federal grants because of its mask mandate.

Only two districts, in Alachua and Broward counties, have already been awarded federal funds so far, but the board’s punishment also applies to schools that haven’t yet gotten federal grant money in case they receive it in the future.

The U.S. Department of Education established a new grant program called Project SAFE to help schools that have been punished by their state government because of Covid-19 mitigation measures like mask mandates.

During a meeting of the Florida State Board of Education on Thursday, officials from the school districts argued they are in compliance with state law because the districts provided some exceptions like medical exemptions, as well as have provisions that loosen the mask orders if Covid-19 transmission in the district drops.

The board withdrew votes on three school districts that were initially supposed to be up for punishment—Hillsborough, Sarasota and Indian River counties—because those counties have loosened their mask policies and are now in line with the state policy.

“If the federal government backfill or buy out school districts with grants, then this board’s enforcement authority is in essence neutralized, nullified and abolished,” Corcoran said during the board meeting Thursday, saying the federal grants “encourage” schools to “violate state law.” “Floridians should be offended by the Biden administration’s use of federal taxes in an attempt to make the enforcement of Florida’s laws so ineffective.”

U.S. Department of Education spokesperson Rachel Thomas said in a statement to Forbes ahead of Thursday’s votes that Corcoran’s recommendation to cancel out the federal grant funds is “deeply troubling” and state leaders’ efforts to punish schools is an “abdication” of their duty to “keep children safe.”

Florida is one of at least 10 states that prohibit or restrict school mask mandates, though many of those measures have now been at least temporarily struck down in court. Numerous studies have shown mask mandates are an effective way to curb Covid-19 transmission in schools. Florida’s policy has been one of the most controversial, as the start of the new school year coincided with a massive Covid-19 surge in the state that ranked among the worst in the world. The number of new daily cases in Florida is now going down, but schools in the state have already faced Covid-19 outbreaks, fatalities among staff members and in some cases had to move to virtual learning.

Multiple lawsuits targeting Florida’s school mask mandate ban are still pending and could result in the policy getting struck down. A judge temporarily struck down the policy and said the ban did not comply with state law, but an appeals court reinstated it while the legal challenge plays out. Six Florida counties with school mask mandates filed another lawsuit against the state on Wednesday that challenges the state’s rulemaking process and argues it should not be able to make rules regarding “parental rights.” The U.S. Department of Education is also investigating Florida and other states with school mask mandate bans to determine whether those policies violate the civil rights of students with disabilities.

Arizona has also financially punished schools with mask mandates by withholding federal funds from schools with mask orders in place. The U.S. Treasury Department has ordered Gov. Doug Ducey to make federal money available to those schools, however, and Arizona’s school mask mandate ban has been struck down in court.