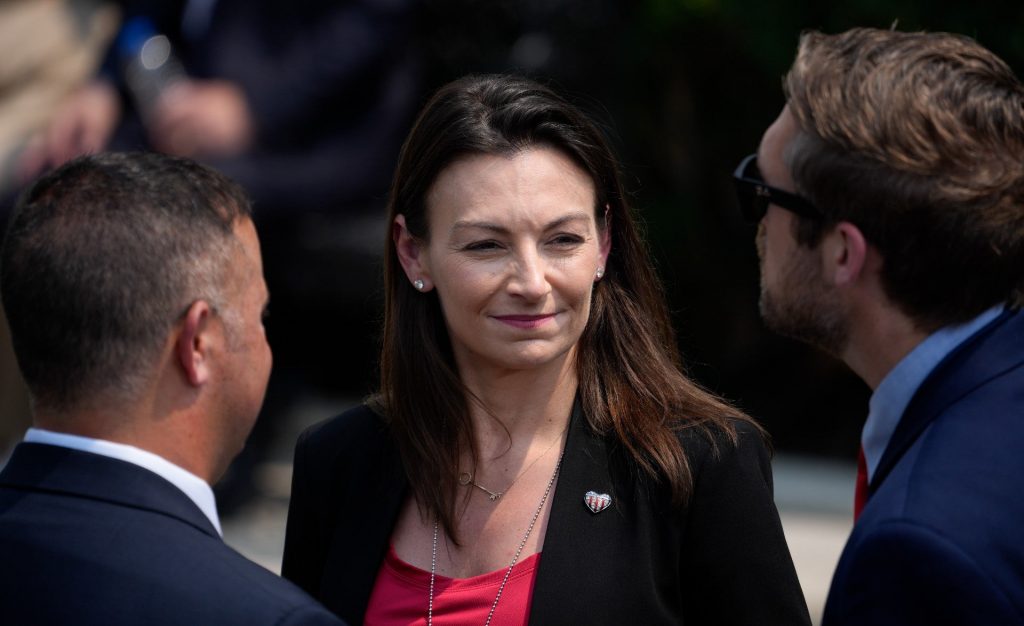 On Monday, Florida’s Commissioner of Agriculture and Consumer Services and gubernatorial contender Nikki Fried (D) called on incumbent Gov. Ron DeSantis (R) to declare a state of emergency as COVID-19 cases continue to rise ahead of school reopenings.

Fried is one of the Democratic candidates who have thrown their hat into the ring in the forthcoming 2022 Florida gubernatorial race.

Nikki Fried, Florida Commissioner of Agriculture and a Democratic candidate for 2022 Florida gubernatorial race, arrives for a ceremony with U.S. President Joe Biden as he welcomes the 2021 NFL Super Bowl champion Tampa Bay Buccaneers to the South Lawn of the White House on July 20, 2021 in Washington, DC. (Drew Angerer/Getty Images)

During a press conference, Fried spoke to a local high school student about the the refusal to implement mask mandates in schools by DeSantis and the state government.

“It is time that we issue a state of emergency. Our hospitals need this, our medical providers, our resources for our locals. It is past time,” Fried said, citing hospitalizations across the state crossing 15,000 and adding that 91 percent of all hospital beds are occupied — half by COVID-19 patients.

National data aggregated by The New York Times depicts the outbreak hitting Florida particularly hard during the most recent wave of the pandemic. Over the past two weeks, the state reported an 40 percent in new cases, bringing the total number of COVID-19 infections to more than 2.9 million.

WHAT YOU NEED TO KNOW ABOUT THE LAMBDA CORONAVIRUS VARIANT

SOME AMERICANS ARE GETTING VACCINATED SECRETLY BECAUSE THEY FEAR BACKLASH

Hospitalizations have risen by 48 percent and fatalities by 123 percent — the most dramatic uptick in all health indicators that Florida has seen since the onset of the pandemic.

Fried blamed the worsening outbreak on the “irresponsible policies” of DeSantis and state education commissioner Richard Corcoran, who have not implemented a statewide mask mandate for children as they return to in-person schooling.

“There are federal resources that we can’t access without a state of emergency being declared, like assistance with FEMA and the National Guard,” Fried explained. “There is no excuse not to ask for all the help we can get.”

In a statement sent to The Hill, DeSantis’s office noted that “Governor DeSantis only declares states of emergency if doing so would result in concrete benefits for Floridians that could not be accomplished with available resources. Nikki Fried and other Democratic politicians often call for a ‘state of emergency’ without explaining what, exactly, they believe it would accomplish in terms of public health outcomes.”

A record number of children have been admitted in state hospitals as the delta variant makes its way through communities, especially those with low vaccination rates.

Florida’s vaccination rates have broadly increased across all age groups since early summer, but have also plateaued in some instances, per recent state data. Overall, about 65 percent of the state’s population is vaccinated.

Nationally, a little over half of all Americans are fully vaccinated, per data from the Centers for Disease Control and Prevention (CDC).

Educators and experts have voiced support for the mandatory vaccination of teachers and mask mandates in schools. The CDC formally recommended both teachers and students wear masks while in classrooms.

EVIDENCE MOUNTS THAT DELTA VARIANT IS DANGEROUS FOR KIDS