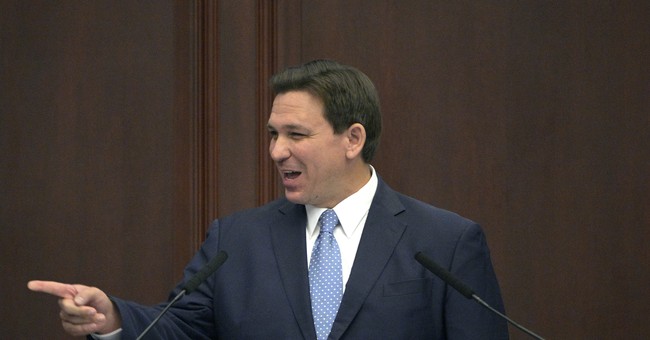 The Sun-Sentinel touts how the media cagily outmaneuvered Ron DeSantis on the way to his winning on policy.

The press continues to grapple with the Florida legislation granting parents more rights concerning their children’s education. Weeks of hysteria and media distortions have been the norm, and the fact that these efforts are not paying dividends has led to an emotional break seen from at least one Florida news outlet. The claim has been sent out that a high achievement victory has been realized, in the face of abject failure, and the comedy is astounding to behold.

The South Florida Sun-Sentinel has been on an anti-DeSantis tear of late, and they have looked remarkably inept all the while. The desire to attack Governor Ron DeSantis – and his Press Secretary, Christina Pushaw – has led the paper to some rather impacted columns over the past few weeks. The desperation from the Broward County paper’s editorial side has achieved Miami Herald levels of journalism – and that is in no way considered complimentary.

It was in early February when there was the neutered attempt to frame DeSantis as a Nazi sympathizer, based on barely a dozen dolts protesting in Orlando, and ignoring that two days earlier, the governor was honoring Holocaust Remembrance Day, and he called to fight against antisemitism. (I had a personal encounter with these same Nazis weeks later, and anyone in the press taking these stunted sociopaths seriously needs to be sent back to J-school.)

It was just days ago when the editorial board from the Sun-Sentinel screeched about the governor blocking black studies and Holocaust teachings in schools, displaying ignorance that DeSantis has in fact signed a law requiring those subjects to be taught in Florida classrooms. Now, this delirious newspaper has descended into madness.

The boast has been made that Ron DeSantis has been bested over the Parental rights legislation, something that has to come as a surprise to many people, most notably the governor himself.

The way the paper has arrived at this declaration is that normally the Republicans are the ones who are adept at framing legislation to suit their objectives, but the people – and the news outlets – incorrectly describing this as a “Don’t Say Gay Bill” managed to outflank DeSantis and the GOP on the issue. Long column inches are dedicated to how the messaging about the bill was a marvel from the left.

Then we see that a supposed victory was achieved when DeSantis and so many others had to respond to the claim this bill forbids the speaking of the word “Gay.” That he, and others, had to resort to saying, “Read what is in the bill,” somehow proved he lost on the messaging. Writer Anthony Man pointed to a recent exchange where DeSantis chastised a reporter for delivering a question and using the inaccurate phrase. The act of pointing out a reporter was lying about the bill is somehow a sign of defeat, according to Man.

The reaction from DeSantis and Pushaw shows the effectiveness of the “Don’t Say Gay” label. Politicians who have to respond to opponents’ messaging, [a political professor] said, “are in treacherous territory because they’re losing control of the narrative.”

All of this boasting is completely impotent, due to a pair of realities, the first being rather important. The bill passed through the legislature. The final step is a DeSantis signature, which he has assured will happen. But this could be chalked up to a partisan legislature, ignoring the will of the people, so there was still a victory in giving voice to the public, correct?!

Uh, no — this, too, would be a resounding “No.” Polls are showing that despite this PR effort to distort the bill, the Florida voters are in support of the new law. Even the Sun-Sentinel had to admit to this, in a fact buried deep in its lengthy “victory” column.

A Morning Consult/POLITICO nationwide poll this month showed “banning the teaching of sexual orientation and gender identity from kindergarten through third grade” was supported by 50% and opposed by 34%. A University of North Florida poll in February showed 49% of the state’s voters disapproving and 40% approving of the legislation.

And this is reflected in another poll I mentioned recently, one taken by Democrats in the heavily blue Dade County area, which showed DeSantis with support to be reelected. So despite all the assurances in the fractured media spectrum that DeSantis is an accursed figure in The Sunshine State, the actual evidence continues to say otherwise.

At this rate, he might just be outmaneuvered all the way to the White House.