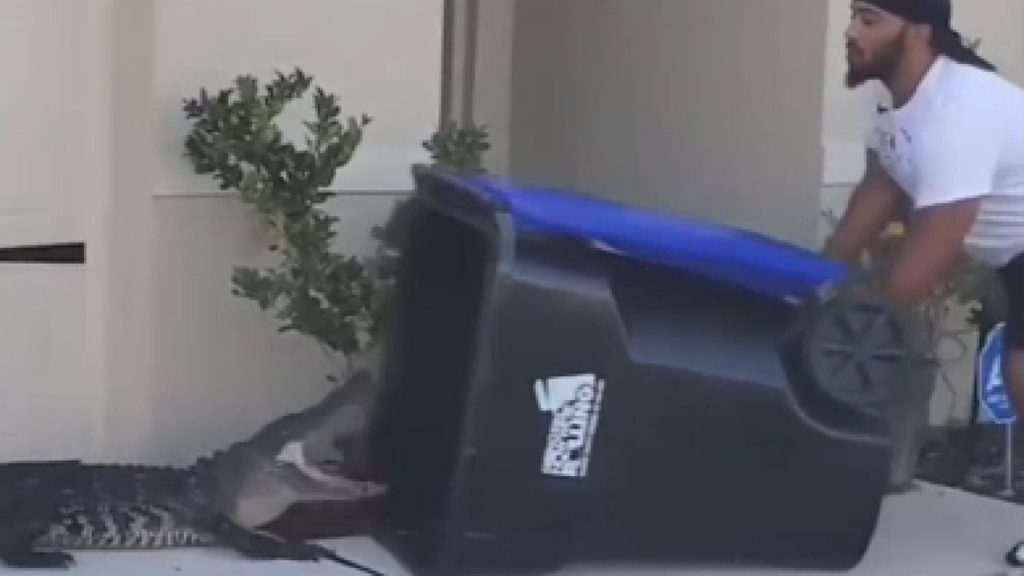 A Florida man became a viral sensation after he was seen capturing a hissing alligator Tuesday using his military training … and a garbage bin.

Eugene Bozzi, 26, an Army veteran, posted the viral video of his unique wrangling methods on his Instagram with the caption, “Crazy day in Florida,” according to reports.

“I don’t know the procedures,” Bozzi told Orlando’s WESH-TV, “so I did it my own way.”

In the video, Bozzi is seen tipping the open trash container as he approaches the 6-foot-long reptile at his home in Mount Dora, about 30 miles northwest of Orlando. As the gator slowly backs away, he is heard saying, “Let me know when the head goes inside.”

When Bozzi drops the lid, it hits the gator’s head, causing the massive predator to start thrashing. Eventually, the gator manages to fit inside the container, and Bozzi closes the lid, to the delight of cheering onlookers.

“So I got the trash can, seen some things on TV,” Bozzi told FOX 35 Orlando. “I knew if I kept the front of the trash can there, he’d at least either go in or think it’s a mouth and retreat, which he kind of did. I just overwhelmed him and threw him inside and walked him down safely, that was it.”

Bozzi then wheeled the container down to a nearby lake and released the alligator into the water, according to the station.

“The weight of him was heavier than I thought he was,” Bozzi added, “so I was thinking he kind of heavy, and then when I got him in there he was real strong, felt like a person was inside trying to hit the top trying to get out and I waited for him to calm down and it was done.”

The incident led the Florida Fish and Wildlife Conservation Commission to tell Floridians who are concerned about alligators, “Don’t grab a garbage can.”

“Call our hotline … & we can dispatch a REAL alligator trapper,” the commission wrote on Twitter.

But the veteran and Philadelphia native said the encounter was “spur of the moment thinking,” according to the New York Post.

Bozzi said he was in his garage talking to his nephew when he heard “a little commotion outside.” He said his daughter was riding a bike when she told him, “Hey, this big alligator just hissed at me!”

“I went over there and it was bigger than me. There were other people’s kids out there, also,” Bozzi told the paper. “Military instinct kicked in — and, you know, protect at all costs.”

A user on Twitter called the encounter “the most Florida thing I’ve seen in months.”

Bozzi told the Post he will likely call “wildlife rescue” next time.