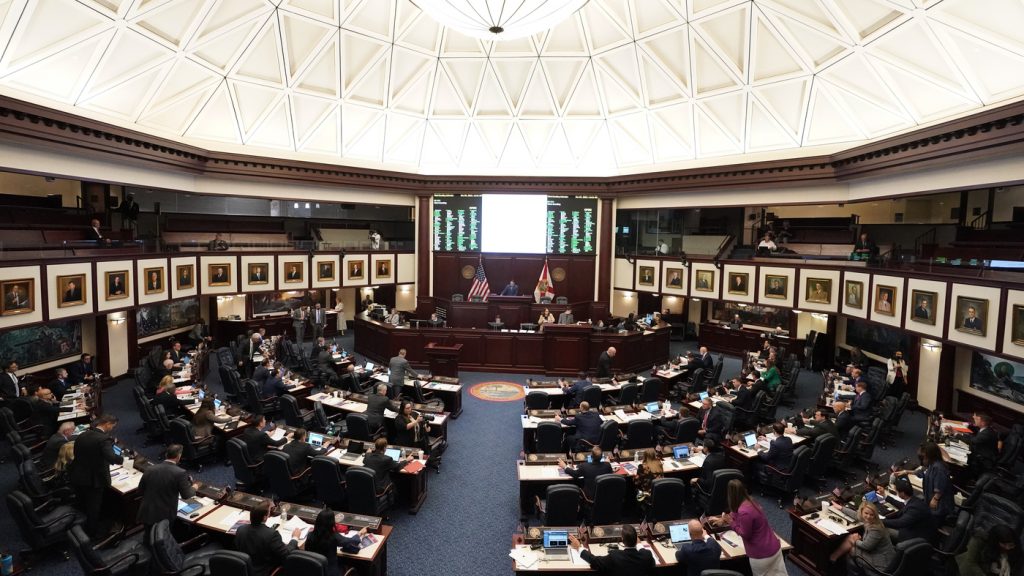 Members of the Florida House of Representatives are seen during a legislative session at the Florida State Capitol on March 7 in Tallahassee.

Members of the Florida House of Representatives are seen during a legislative session at the Florida State Capitol on March 7 in Tallahassee.

Republican legislative leaders in Florida say they’re going to give up trying to redraw the state’s new map of congressional districts and instead consider one offered by Gov. Ron DeSantis during a special session next week.

DeSantis, a potential Republican presidential aspirant, has been pushing a map that’s considered more advantageous to his party.

The announcement on Monday by state Senate President Wilton Simpson and House Speaker Chris Sprowls came two weeks after DeSantis vetoed a map that had been approved by the legislature.

“At this time, Legislative reapportionment staff is not drafting or producing a map for introduction during the special session,” the lawmakers said in a letter. “We are awaiting a communication from the Governor’s Office with a map that he will support.”

The ACLU of Florida condemned the legislature’s decision to punt the responsibilities of redistricting to DeSantis, calling it an “unprecedented” and “undemocratic” move.

“People should pick their politicians, not the other way around,” the group said in a statement.

Florida is one of just three states with more than one congressional district that hasn’t yet finalized its new map, according to FiveThirtyEight.

The state could prove crucial to determining control of the U.S. House.

Thanks to massive population growth, Florida gained a congressional seat as a result of the last U.S. census, for a total of 28 districts.

He’s been outspoken about his desire to challenge two congressional districts, believing that their protections for minority voters are unlawful.

At the conclusion of a bill signing Tuesday, DeSantis said his office’s map will “have North Florida drawn in race-neutral manner. We are not going to have a 20-mile gerrymander that divvies up people based on the color of their skin. That is wrong. That is not the way we have governed in the state of Florida.”

DeSantis acknowledged whatever map is ultimately picked will be challenged in court.

Unlike state legislative maps, which require the approval of the state Supreme Court, Florida’s congressional map only needs the governor’s signature to become law, WFSU reported.

Numerous state legislatures that have redrawn their district lines based on new census data have landed in state court battles over the new maps, after the U.S. Supreme Court ruled in 2019 that partisan gerrymandering challenges couldn’t be heard by federal judges.

A special session of the Florida legislature to produce new congressional maps is scheduled for next Tuesday and will run no later than next Friday.

The dispute over the state’s district lines follows acrimony over new voting provisions. A federal judge last month struck down portions of a Florida election law passed last year, saying it would suppress Black voters. The state is appealing the ruling.