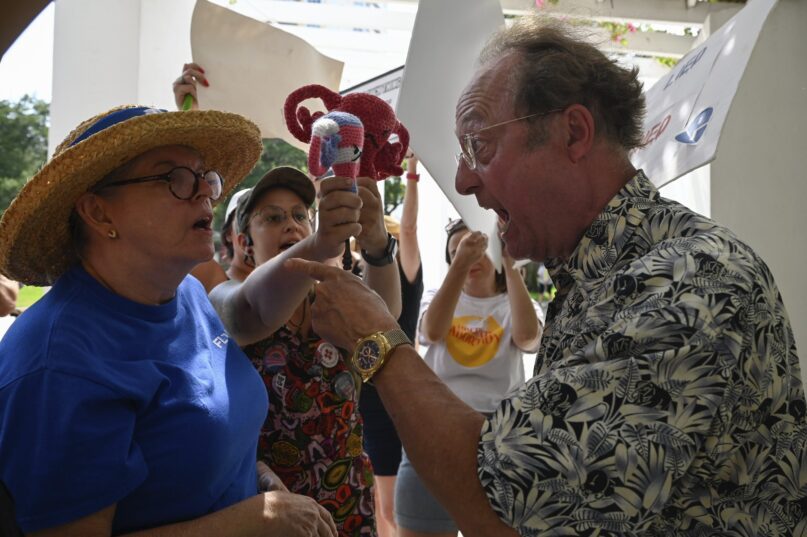 TALLAHASSEE, Fla. (AP) — Reproductive health providers are asking a Florida court to block a new state law from taking effect this week that would further restrict abortions, arguing the state constitution guarantees a broad right to privacy on matters including abortion.

Planned Parenthood is among those seeking a temporary emergency injunction to stop the law approved this year by Florida’s Republican-controlled legislature and governor. A Florida synagogue also sued, saying the government intrusion violates the privacy rights and religious freedoms of Jewish women.

A hearing was underway in the case Monday in Tallahassee, days after the U.S. Supreme Court ruled that abortion has no basis in the U.S. Constitution.

Florida currently allows abortions up to 24 weeks. The new law prohibits abortions beyond 15 weeks except to save the life or prevent physical harm to the pregnant woman, or in cases of a fatal fetal abnormality. It mirrors the Mississippi law that conservative justices used to overturn Roe v. Wade.

Violators could face up to five years in prison. Physicians or other medical professionals could lose their licenses and face administrative fines of $10,000 for each violation.

“The ban is blatantly unconstitutional under the state constitution,” the ACLU of Florida, which is representing the plaintiffs, said in a statement.

Florida voters in 1980 amended the state constitution to guarantee a broad right of privacy, which includes the right to abortion, the abortion providers said in court papers.

In 2012, Florida voters reaffirmed the right to privacy by rejecting a ballot initiative that would have weakened its protections and would have prohibited state courts from interpreting the Florida Constitution to provide stronger protection for abortion than federal law, they said.

“Despite Florida’s history of protecting the right to abortion, the Florida legislature recently engaged in a brazen attempt to override the will of the Florida people,” the abortion providers said.

In court papers, the state argued that abortion providers don’t have standing to make a claim of a personal right to privacy since they are acting as third parties on behalf of their patients, and failed to show they will suffer “irreparable harm” if the injunction isn’t granted.

“Doctors are not irreparably harmed simply because they cannot perform a procedure prohibited by state law,” attorneys for the state of Florida said.