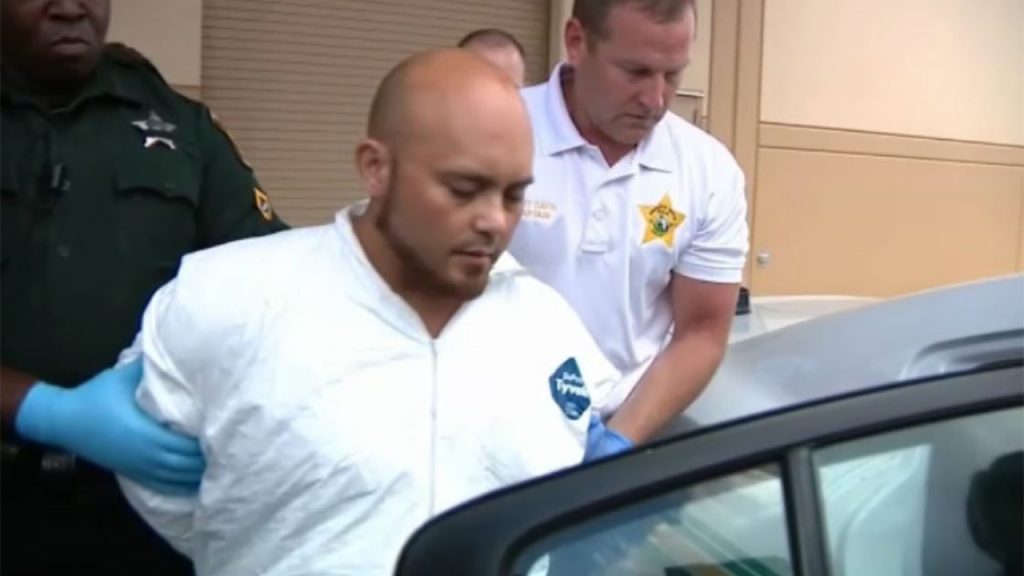 A judge in Florida on Monday ordered a suspected gunman held without bond a day after the Marine and self-described “survivalist” allegedly broke into a stranger’s home in a methamphetamine-fueled rampage and murdered four people, including a three-month-old baby boy in his mother’s arms.

Bryan Riley, 33, of Brandon, Florida, is believed to have “zero connection” to his victims in the unincorporated area of Lakeland, where he then barricaded himself inside their home and fired at law enforcement. After he came outside and surrendered with his hands up, officers entered the home to also found an 11-year-old girl who had survived despite being shot at least seven times.

The girl, a student at Lake Gibson Middle School, remained hospitalized in critical but stable condition Monday morning at Tampa General Hospital, where she had undergone surgery, a detective told WTSP.

Riley, who was shot once, was placed in handcuffs and transported to the hospital, while repeatedly making statements to Lakeland police officers that he had been taking methamphetamine, and was a “survivalist,” Polk County Sheriff Grady Judd said at the second of two press conferences Sunday.

“Of course there are people across the state and nation who think that’s a low level, non-violent drug. Well, they couldn’t be more wrong,” Judd said. “I’ve got empirical evidence to the contrary. I wish they would quit saying that publicly and I wish the politicians would quit paying attention to it because taking him at his word and face value, this drug is anything but low-level and non-violent.”

The victims include 40-year-old Justice Gleason, a 33-year-old woman, and a 3-month-old infant boy. A 62-year-old woman, who was believed to be the grandmother of the infant, was also found deceased in the apartment next door. The family’s dog, Diogi, was also shot and killed.

Riley was a Marine who served for four years before being honorably discharged and serving another three years in the Reserves, Judd said Sunday. He was deployed to Iraq in 2008 and Afghanistan from 2009 to 2010 and he during that period of time was designated as a “sharpshooter.”

Fox News reached out to the Marine Corps for more information about Riley’s service record.

“This guy prior to this morning was a war hero… he was a decorated military veteran,” Judd said. “This morning he’s a cold calculated murderer.”

Authorities said Riley also attempted to grab an officer’s gun once at the hospital and then was sedated.

He is currently employed by ESS Global Corporation in executive protection as a body guard and to provide security, Judd said. His girlfriend of four years told law enforcement Riley suffered from post-traumatic stress disorder and depression and had come home from working security at a church in Orlando a week earlier saying he believed he could now speak to God.

Riley initially came to the home in Lakeland around 7:30 p.m. Saturday and allegedly told one of the eventual victims, “God sent me here to speak with one of your daughters, Amber.” He believed Amber was going to commit suicide, but the residents warned there was no one there by that name.

Deputies responded within six minutes, but by then, Riley had already left the scene, and authorities spent about twenty minutes canvassing the area but did not find any sign of him. Nine hours later, a lieutenant in the area heard volleys of gunfire and law enforcement who arrived to the home around 4:30 a.m. that morning saw a truck on fire and a man outside in camo who then ran back inside.

Officers heard more gunshots, a woman screaming and a baby whimpering, Judd said. Law enforcement attempted to make entry into the front of the home, but it was barricaded. Upon going around back, a lieutenant was met with the suspect wearing a bullet proof vest, knee pads and head gear.

Dozens, if not hundreds of rounds of gunfire, was exchanged before Riley surrendered with his hands up, something Judd categorized as the gunman showing his true cowardice. He also said Riley had placed glow sticks from the road leading up to the home to lure officers into an ambush.

“At this point in the investigation, we find zero connection between our shooter, our murderer and our victims,” Judd said Sunday. “It would have been nice if he would have come out with a gun. We would have shot him up a lot. But he didn’t because he was a coward. When someone chooses to give up, we take them into custody peacefully.”