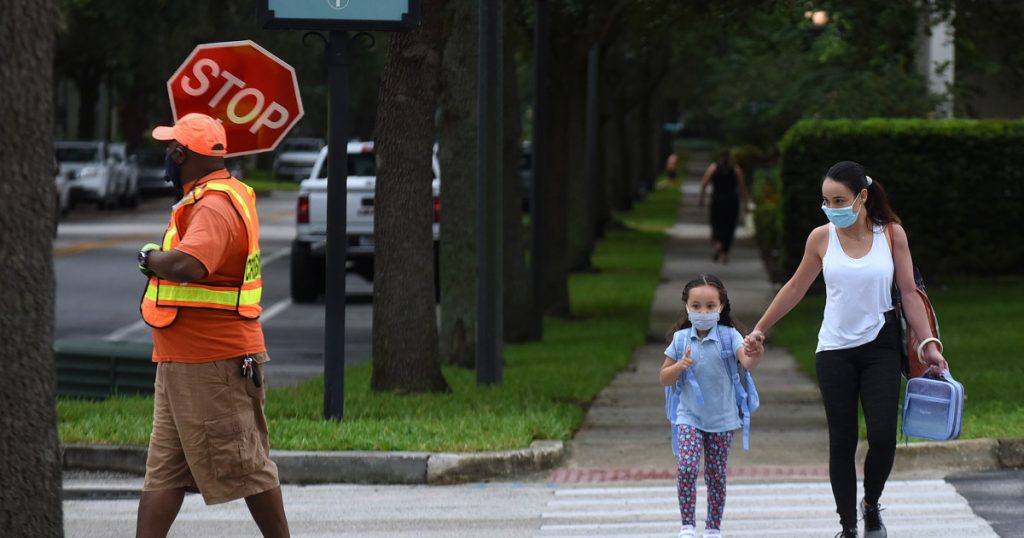 Florida Gov. Ron DeSantis on Friday barred local school district from requiring students to wear masks even as the nation fights a resurgence of coronavirus.

The Sunshine State’s chief executive said he disagreed with guidelines issued Tuesday by the Centers for Disease Control and Prevention, which recommends that all students in kindergarten through 12th grade wear coverings when they return to classrooms this fall.

DeSantis signed an executive order Friday prohibiting school districts in his state from having a choice to set such a mandate.

“The federal government has no right to tell parents that in order for their kids to attend school in person, they must be forced to wear a mask all day, every day,” DeSantis said in a statement. “Many Florida schoolchildren have suffered under forced masking policies, and it is prudent to protect the ability of parents to make decisions regarding the wearing of masks by their children.”

Before signing the order, the governor told supporters at a Cape Coral restaurant that he and his wife have always opposed masks for their children.

“I have young kids. My wife and I are not going to do the masks with the kids. We never have,” he said. “I want to see my kids smiling. I want them having fun.”

“No matter if we live in urban South Florida, in the rural Panhandle or somewhere in-between, we all want our children to be healthy and safe,” according to a union statement.

“Unfortunately, through his words and actions, Gov. DeSantis has made clear he does not respect the freedom of locally elected officials to do what they feel is best for their communities.”

The coronavirus pandemic has killed more than 615,000 Americans, according to a rolling NBC News tally. At least 38,000 of those fatalities have been in Florida, in a per capita rate that ranks the Sunshine State squarely in the middle of the pack.

But the new delta variant has led to a spike in cases, raising concerns among public health authorities in the state.

About 48.7 percent of Florida’s population has been fully vaccinated, according to NBC’s vaccination tracker. That puts Florida slightly behind other large states like California (52.6), New York (56.9) and Pennsylvania (52.2) but ahead of Illinois (48.3) and Texas (43.7).

Despite the surge in cases, DeSantis said mask mandates for school children would be meaningless anyway.

“Whatever you think of masks, you got to wear it properly. My kids ain’t going to wear that thing properly, you know that,” he told his laughing supporters.

“Look if a parent really feels that this is something that’s important for their kid, we’re not stopping that. They absolutely have every right to equip their student with whatever types of masks that they want.”