Florida Enacts Law to Highlight the Evils of Communism 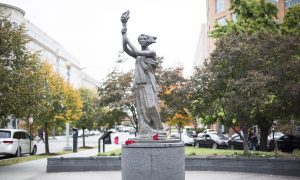 Republican Gov. Ron DeSantis of Florida is in the national limelight again. This time he’s garnering attention for signing legislation that requires public schools to devote at least 45 minutes a year to teaching the “evils of communism.”

The range of negative reactions to the new law is telling.

One of the more surprising objections was raised by a Chinese émigré who works as an economist at the Mercatus Center, George Mason University’s pro-free-market think tank. Weifeng Zhong told the Washington Times, “Immigrants and refugees from China, Cuba, North Korea, and more understand the authoritarian regimes they were once in. They didn’t learn that from mandatory courses in school.”

Quite true. Nobody who has lived under communism needs to take a course to learn how oppressive and cruel such regimes are. Their personal experiences provide all the evidence they need to understand that basic reality. Unfortunately, though, millions of young Americans are woefully clueless about what daily life is like in a country ruled by communists. They are scandalously ignorant of the sheer destructiveness of an ideology that has snuffed out approximately 100 million lives in the past 105 years while enslaving hundreds of millions more. That’s exactly why a law requiring at least a cursory knowledge of the pertinent facts is now needed.

Zhong need not worry about Americans hating those who flee communist tyranny. A small minority of Americans may resent immigrants whom they perceive to represent a threat to their jobs, but the overwhelming majority of Americans are more than happy to welcome refugees escaping from tyrannies.

The more typical objections to the new Florida law will come from the anti-American left. They will point out America’s faults while glossing over communist atrocities.

A student at the college where I taught gave a lesson about the evils of communism at the high school where she did her student teaching. After the class, her supervising teacher glared at her and huffily stated that after she was gone, he would teach the students about the good things that communist governments did. Huh? What good things? A “good side of communism” lecture would have to be the shortest lecture (well, the shortest truthful lecture) in academic history. The appalling fact that some teachers teach that communism has made some positive contributions to human society shows why the Florida law is so needed.

According to the Washington Times’ report, one of the more over-the-top reactions to the Florida law popped up on a feminist website, Jezebel.com: “For any impressionable Florida kids that may be reading this, please note that there have never been any ‘true’ communist countries, owing largely to violent intervention from the US and other western superpowers.”

Let’s gloss over the counterfactual reference to “other western superpowers.” What’s most fascinating about this bizarre statement is the sudden concern on the left for “impressionable.” Leftists were loudly opposed to Florida’s recent law banning instruction about gender identity, even though the little tykes covered by that law (grades kindergarten through three) are certainly more impressionable than the “kids” who are old enough to be reading about communism. Yet it seems that leftists would like to ban any historically factual education about communism, a political virus that poses an existential threat to the realization of each person’s unique individuality.

The assertion that “there have never been any ‘true’ communist countries” is a favorite leftist myth. Well, it’s technically true, I suppose, in the sense that there has never been a historical example of a communist regime imposing a Marxist plan on society and successfully creating a just and affluent workers’ paradise followed by the ruling communist party withering away, its historical mission having been accomplished. But it isn’t correct to assert that “true” communism hasn’t been tried. Lenin imposed complete communism for the first few years he was in power in Russia. The problem for him and his subject peoples was that communism in practice was so unworkable that Lenin jettisoned “pure communism” and replaced it with his New Economic Policy in 1921. The policy permitted limited free market activity, not because Lenin liked economic freedom, but because it was the only way to keep the Russian people from starving to death and strangling his “communist paradise” in its cradle.

Speaking of starvation in Soviet Russia, it had gotten so bad by 1921 that the United States started sending massive food aid to lessen the death toll of the Russian famine. The aid began to arrive in late summer 1921. A year later, American food aid was feeding approximately 11 million Russians every day. Far from “violent intervention,” as alleged in the hysterical rant quoted above, if it hadn’t been for the United States’ humanitarian intervention, Soviet communism would have expired before ever becoming a global menace.

It’s unfortunate that Florida had to enact a law directing schools to acquaint students with the evilness of communism. One would think that American teachers, having lived their whole lives free from political oppression and the impoverishment caused by central economic planning, would, as a matter of course, teach the crucial and profound differences between the American belief in individual rights and communism. Alas, many teachers and schools have gotten off track; in fact, many of them have adopted leftist curriculums.

Since the left has weaponized education, pushback and countermeasures have become necessary. In that context, the Florida law mandating some modest observances and lessons about the evils of communism is a welcome development.

Views expressed in this article are the opinions of the author and do not necessarily reflect the views of The Epoch Times.

Mark Hendrickson is an economist who retired from the faculty of Grove City College in Pennsylvania, where he remains fellow for economic and social policy at the Institute for Faith and Freedom. He is the author of several books on topics as varied as American economic history, anonymous characters in the Bible, the wealth inequality issue, and climate change, among others.