Florida County Sets Up Showdown With DeSantis Over Anti-Mask Mandate 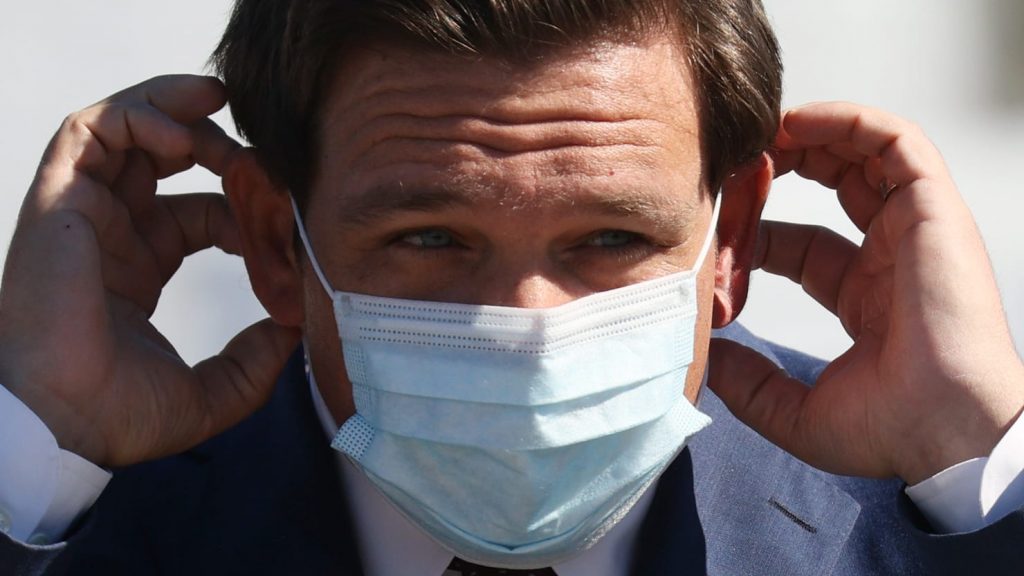 GAINESVILLE, Fla.—A county in north central Florida has become the first in the state to impose an indoor mask mandate, setting up a potential battle with Gov. Ron DeSantis as it wages war against COVID-19.

The Alachua County order, effective Thursday, requires masks to be worn inside all public spaces, with exceptions for those eating and drinking in restaurants. It will remain in place for seven days, with potential one-week extensions for a total of 42 days.

Ken Cornell, the chair of the Alachua County Commission, said the order is the county’s best recourse against COVID-19.

“This time is different from last time,” Cornell said. “We’ve experienced a big spike in cases due to the Delta variant. We’ve seen an increase in hospitalizations, ICUs.”

That spike is reflected in county data. The COVID-19 positivity rate in Alachua County jumped from around 2 percent throughout June to almost 15 percent in August. As of Thursday, 452 people are currently hospitalized with COVID-19 between the county’s two largest hospitals, with 152 people in intensive-care units and 90 people on ventilators.

Cornell said the county’s order complies with a law DeSantis signed in May banning local COVID-19 mandates. Per that bill, if a county has declared a state of emergency, it can issue emergency orders “narrowly tailored to suit a compelling public health or safety purpose.” That order can remain in effect for seven-day periods and be extended for a total of 42 days.

Those orders, however, can also be vetoed by the governor if he deems them unnecessary.

“We believe that this actually is what the statute calls for: take local data, make local decisions,” Cornell told The Daily Beast. “We’ve got a lot of data that show where our community is, and I do hope the governor supports it.”

DeSantis’ office did not respond to repeated requests for comment.

The county’s decision comes as the Delta variant has led to new COVID-19 measures across the country. Many Florida school districts—including Alachua’s—have defied DeSantis’ ban on mask mandates, even as the governor threatens to withhold funding.

The Alachua County school district became the first in the state to implement an indoor mask mandate, with districts in Miami-Dade, Broward, and Hillsborough counties following suit. Its decision led to an emergency session of the Florida Board of Education, which voted Tuesday to investigate the county’s defiance and potentially strip state funds from the district.

Nevertheless, the county school board extended its mask mandate Tuesday for eight weeks.

“All our families should have the expectations that their parental rights are being protected,” Alachua Superintendent Carlee Simon said during Tuesday’s meeting, according to News4Jax. “We need to protect all rights, not just the parents wanting optional masks.”

Cornell said he will continue to support the school board’s decision even if the governor retaliates.

“If in fact that the governor did pull funding, the local government would stand behind them. When you pull funding from [state funds], you’re impacting kids,” he explained.

“When half your state has a virus, at some point you have to give in,” Hedge said. “I think it would be very difficult to not respond to some of the local pressures.”

Cornell, the county commission chair, said many of the businesses in the county already require masks in their establishments. But the order may not apply for state entities in the county—like the local University of Florida, which will welcome thousands of students back to in-person classes Monday.

The school said it would stick to an optional masking policy as advised by the Florida Board of Governors, the governing body for state universities.

“We’re a state entity, not a county entity, so we go by different guidance,” spokesman Steve Orlando said. “And this guidance we’re following now is consistent with the Board of Governors.”

Should DeSantis seek to block the order, he would likely have to take it to court, Hedge said. From there, the court would have to determine whether the state law meets or exceeds the governor’s authority.

“Ultimately, this comes down to what the state’s courts are going to allow and what state and local governments are willing to do,” Hedge said.

Mark Sexton, the county’s communications director, said the county could call an emergency meeting to discuss how to proceed if the governor vetoes the rule. Then, the five-member commission may decide to modify its decision or, if warranted, bring the order before a judge.

Cornell, however, said he hopes the governor will see the pressing matter at hand and trust the county’s decision.

“For us, this seems like the best time to do this with the goal of minimizing the spread,” he said. “I’m a big believer in local governments being closest to the people for local decisions, and this is just the example of that.”