Florida Can’t Enforce Its Ban On Mask Mandates During An Appeal, A Judge Says 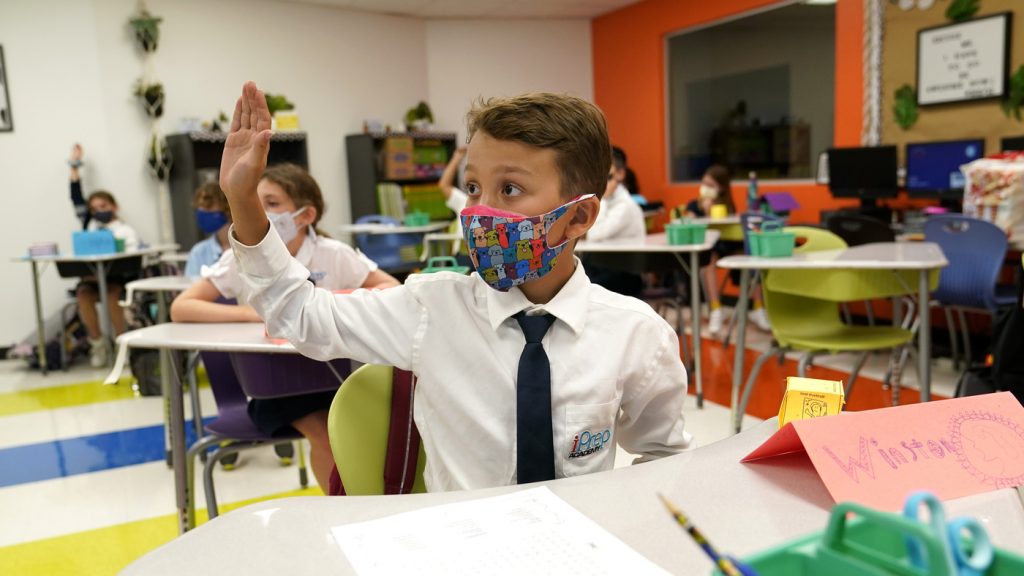 Winston Wallace, 9, raises his hand in class at iPrep Academy on the first day of school in Miami. A judge has ruled that Florida school districts may impose mask mandates.

Winston Wallace, 9, raises his hand in class at iPrep Academy on the first day of school in Miami. A judge has ruled that Florida school districts may impose mask mandates.

ST. PETERSBURG, Fla. — A Florida judge ruled Wednesday that the state cannot enforce a ban on public schools mandating the use of masks to guard against the coronavirus, while an appeals court sorts out whether the ban is ultimately legal.

Cooper said the overwhelming evidence before him in a lawsuit by parents challenging the DeSantis ban is that wearing masks does provide some protection for children in crowded school settings, particularly those under 12 for whom no vaccine yet exists. The issue came to a head amid a recent surge in cases caused by the more contagious and deadly delta variant of the virus, which health statistics show has begun to wane.

“We’re not in normal times. We are in a pandemic,” Cooper said during a hearing held remotely. “We have a (coronavirus) variant that is more infectious and dangerous to children than the one we had last year.”

The state has an appeal against the judge’s order

Since DeSantis signed the mandatory mask ban order on July 30, 13 school boards representing more than half of Florida’s 2.8 million students have adopted mask requirements with an opt-out only for medical reasons. State education officials have begun going after rebellious school board members’ salaries as a form of punishment.

Jacob Oliva, public schools chancellor at the state Department of Education, said in a notice last week to local superintendents that “enforcement must cease if the stay is lifted.” That includes the effort to dock salaries of school board members or impose other financial penalties.

The case next goes before the 1st District Court of Appeal in Tallahassee. DeSantis said at an appearance Wednesday in Palm Harbor that he is confident the state will prevail. The matter could ultimately be decided by the Florida Supreme Court.

The core of the governor’s argument is that the recently passed Parents Bill of Rights gives decision-making authority to parents on whether their children should wear a mask to school.

“What we’ve found is in the trial courts in Tallahassee, state and federal, we typically lose if there’s a political component to it, but then in the appeals court we almost always win,” the governor said.

Cooper seemed to go out of his way to point out that he has frequently ruled in favor of Florida governors in the past, including cases involving GOP Govs. Jeb Bush and Rick Scott. Cooper has been a Leon County circuit judge since he was first elected in 2002.

“If you look at my record, it’s not somebody who runs all over the place, ruling against the governor,” Cooper said. “This case has generated a lot of heat and a lot of light.”

On the Parents Bill of Rights, Cooper said his previous order follows the law as passed earlier this year by the Legislature. The law, he said, reserves health and education decisions regarding children to parents unless a government entity such as a school board can show their broader action is reasonable and narrowly tailored to the issue at hand.

The DeSantis order impermissibly enforces only the first portion of that law, Cooper said.

“You have to show you have authority to do what you’re doing,” the judge said. “You cannot enforce part of that law but not all of it.”

In a separate case, parents of special needs children have filed a federal lawsuit claiming the DeSantis mandatory school mask ban violates the Americans with Disabilities Act by placing their medically sensitive children in jeopardy.

A federal judge in Miami did not immediately rule after a hearing Wednesday in that case.

Additionally, school officials in Broward, Alachua and Orange counties filed a petition to schedule a hearing before an administrative law judge. According to the filing, the local school officials want the judge to invalidate a state health department emergency rule against school mask requirements based on the governor’s executive order.