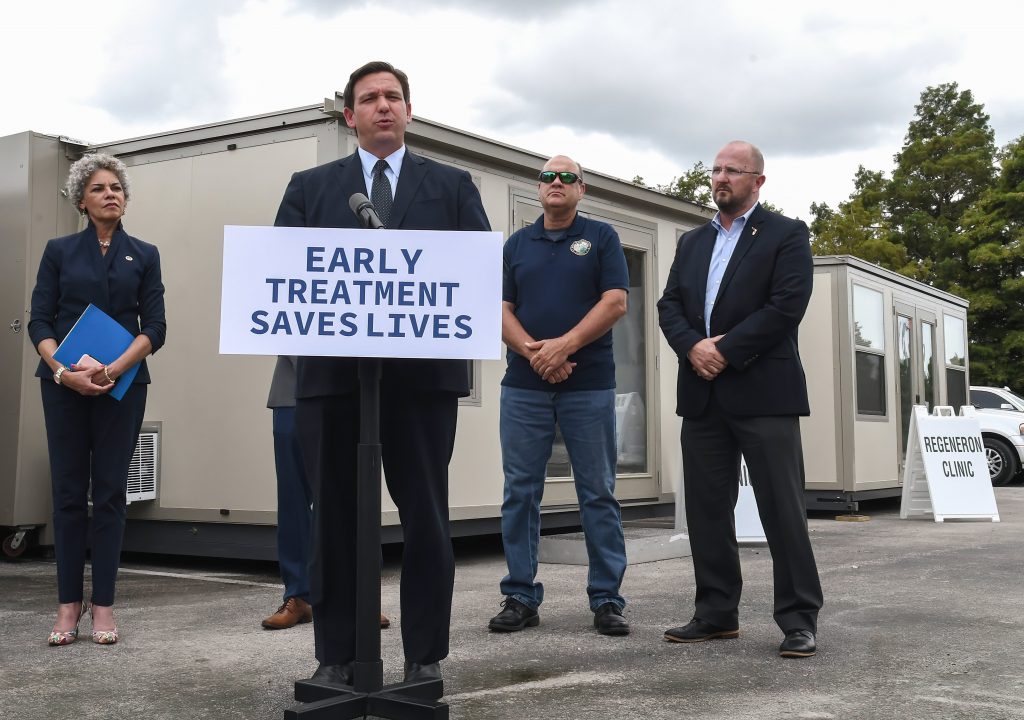 Florida and Texas are opening free monoclonal antibody centers to treat a surge in Covid-19 patients in both states, hoping early intervention will help keep people out of the hospitals and save more lives — even as the governors of both states fight local officials on mask and vaccine mandates.

Texas is setting up nine antibody infusion centers, Gov. Greg Abbott announced Friday, while Florida launched its fifth site Wednesday. With the delta variant surging, more than 46% of Texas’ intensive care beds and over half of Florida’s ICU capacity were filled with coronavirus patients as of Thursday, compared with 27% nationwide, according to the Department of Health and Human Services.

“What puts you in the hospital is the inflammation. People get inflammation in their lungs,” Dr. Arturo Casadevall, chair of Molecular Microbiology and Immunology at Johns Hopkins University’s Bloomberg School of Public Health, told CNBC in an interview. “So what these antibodies do is, if you give them to a patient early, they will neutralize the virus.”

Abbott is getting firsthand experience with the treatment. His office announced Tuesday that he’s receiving Regeneron’s monoclonal antibody treatment after he tested positive for Covid, despite being fully vaccinated.

Though monoclonal antibodies, such as Regeneron’s and GlaxoSmithKline’s treatments, are one of the few proven methods to fight the virus and reduce hospitalizations, they’ve rarely been used throughout the pandemic because they are cumbersome to administer. The monoclonal antibody treatments need to be injected directly into the vein via an IV infusion, which takes time and dedicated medical staff, often using the same equipment reserved for chemotherapy patients.

The Food and Drug Administration granted Regeneron’s treatment an emergency use authorization in November, saying it reduced Covid hospitalizations “in patients at high risk for disease progression within 28 days after treatment.” GlaxoSmithKline just won emergency approval for its treatment with Vir Biotechnology in May, saying it reduced hospitalizations and death in high-risk patients by about 85%.

The FDA cleared both companies’ treatments for use in patients ages 12 and older.

“Many patients, who are evaluated by their doctors and referred to receive a monoclonal antibody infusion, have a decreased likelihood of being hospitalized,” Teresa Farfan, spokeswoman for the Texas Division of Emergency Management, said in an email to CNBC. “This helps to ensure that resources are available at hospitals to treat those with the most severe cases of the virus.”

The treatment centers couldn’t come soon enough as the delta variant pushes cases in Florida to record highs. The state, which discloses its cases once a week on Fridays, most recently reported a record-high seven-day average of nearly 21,700 new infections, up 12.6% from a week ago, according to a CNBC analysis of data compiled by Hopkins.

“I want to be very clear on this – both monoclonals and vaccines save lives,” Christina Pushaw, spokeswoman for Florida Gov. Ron DeSantis, said in an email to CNBC. “They are certainly not mutually exclusive.”

More than 34% of Florida’s 50,706 reported hospital inpatients have the coronavirus, as do over a quarter of Texas’ 51,337 reported inpatients, HHS measured as of Thursday. Abbott called last week for 2,500 medical personnel from across the country to help battle the virus and asked hospitals to create capacity by postponing elective procedures.

A box and vial of the Regeneron monoclonal antibody is seen at a new COVID-19 treatment site opened by Florida Governor Ron DeSantis at Camping World Stadium in Orlando following a press conference.

While both Abbott and DeSantis have urged residents to get vaccinated, they remain strongly opposed to mask or vaccine mandates, saying they violate personal liberties. The Republican governors have banned local governments and school districts from requiring facial coverings. Abbott has threatened $1,000 fines for those who fail to comply, and DeSantis said he will withhold pay from educators who mandate masks.

With many kids returning to classrooms this fall, local officials are pushing back. Several school districts in both states have defied their governors’ orders and restored their mask mandates, with appeals courts in Dallas and San Antonio awarding temporary restraining orders last week to circumvent the ban.

The Texas Supreme Court on Sunday blocked the restraining orders, siding with Abbott and stopping the school districts from issuing their own guidance. Local officials say they plan to continue fighting Abbott in the courts, and President Joe Biden on Wednesday directed the education secretary to intervene “to protect our children.”

“This includes using all of his oversight authorities and legal action if appropriate against governors who are trying to block and intimidate local schools officials and educators,” Biden said.

“Those states are gambling, the way I view it,” he said in an interview. “With not allowing masking and preventing masking and leaving it up to parents, (they) are really playing with fire.”