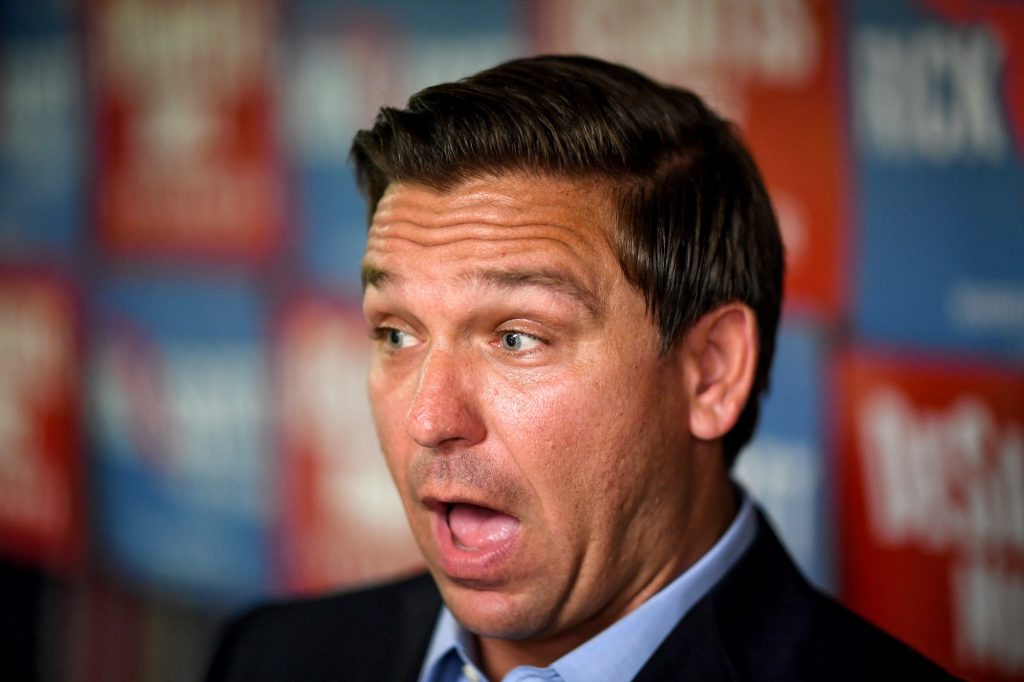 Earlier this week, President Joe Biden called on elected officials to help defeat the COVID-19 pandemic or “get out of the way.” Rather than heed his advice, the nation’s most irresponsible leaders have continued to do their thing, with states like Texas and Florida—which account for about a third of infections in the United States—seemingly competing to see who can come up with the most deranged approaches to the deadly virus.

Thanks to Ron DeSantis, the profoundly cynical and incorrigibly smug Florida governor, the Sunshine State had lead by a nose in this race to the bottom. DeSantis has mocked public health officials as caseloads skyrocketed, pursued an idiotic offensive against Biden, and enacted rules designed to prevent mask and vaccine requirements and to forbid municipalities from instituting their own COVID safety measures. “We think that’s the most fair way to do it,” DeSantis said last week, introducing an order making masks optional in schools.

But Texas, led by Greg Abbott, who has also banned local COVID ordinances, has come roaring back. On Thursday, the state released a new guidance that somehow makes DeSantis’s effort to block cruise ships from requiring vaccines seem smart: Under recommendations from the Texas Education Agency, schools do not need to conduct contract tracing and do not need to let parents know if a student has tested positive for the virus. If a student does come into contact with an infected person, a parent can still send them to school under the new guidance.

The moves by Florida and Texas, which come as other states are tightening precautions while the delta variant surges across the country, are perhaps best described as pro-COVID. Not only are they declining to push vaccinations, as other government and business officials are doing with increased urgency, the two governors are actively standing in the way of precautions to at least limit the spread of the virus, which they’ve cavalierly downplayed. “This is our COVID season,” DeSantis shrugged Thursday.

Their posturing—a calculated play to the coterie of anti-vaxxers, COVID deniers, and culture warriors who make up the MAGA base—poses a significant public health threat, and not just to the unfortunate residents of their respective states, who may not take much comfort in DeSantis’s explanation that it’s “COVID season” as their hospitals once again fill up. (Speaking of hospitals, DeSantis on Thursday came out against health care facilities requiring staff to be vaccinated: “It’s not something I support,” he said.) In nurturing conditions for the virus to spread, DeSantis and Abbott may be overseeing a breeding ground for potential new variants—ones that health officials fear could prove wilier than the delta mutation, which is more infectious than the original strain but still isn’t much of a match for vaccines. (Despite intense media coverage, breakthrough cases among the inoculated remain rare and are overwhelmingly mild or asymptomatic.)

“When you give it ample opportunity to mutate,” Dr. Anthony Fauci said Thursday, “you may sooner or later get another variant, and it is possible that that variant might be in some respects worse than the already very difficult variant we’re dealing with now.”

There have been at least two positive developments since the delta threat exploded in recent weeks. First, vaccinations, which stalled for much of the summer, have accelerated, suggesting that the emergence of the more contagious strain has convinced at least some holdouts to finally get their shots. Second, setbacks seem to have spurred the government, along with the private sector, to take a much more aggressive tack on vaccines. Localities are beginning to require proof of vaccination to engage in aspects of public life. Governments and businesses are mandating that employees be vaccinated, with some, like United Airlines, threatening termination for those who refuse. The Biden administration, meanwhile, may be about to take its most dramatic step yet: According to the Washington Post, the president is considering a plan to withhold federal funds from institutions, from businesses to universities, in order to compel vaccinations. The move, which would impact millions of Americans, has the potential to reach the one-third of adults who haven’t been vaccinated in a way that existing incentive programs have not. It would also reflect the gravity of the moment in a way that promising free weed for shots doesn’t. “We keep referring to this COVID thing like it’s an emergency,” Ezekiel Emanuel, a bioethicist at the University of Pennsylvania, told the Post, “and then we don’t behave like it’s a wartime emergency.”

Such a move would, of course, come with plenty of blowback from conservatives like DeSantis and Abbott. But if they’re going to take drastic measures that could intensify and prolong the pandemic, it’s more than reasonable for Biden and others to take equally drastic measures to bring it to an end. Vaccinations through the late winter and spring drove down caseloads dramatically, giving Americans a sweet taste of post-pandemic life. The ability to get more Americans vaccinated in the coming weeks may determine whether this late summer surge is a brief blip, or the beginning of a return to darker times we’d hoped to leave in 2020. Abbott, DeSantis, and others on the MAGA right aren’t helping, nor are they getting out of the way. Fortunately, other leaders, in government and in business, are simply going around them.

— Inside the Feverish Mind of Postpresidential Donald Trump
— Joe Manchin Ghosts Workers Whose Jobs His Daughter Helped Outsource
— Fauci Tells Anti-Vaxxers to Sit Down and STFU as COVID Cases Surge
— What If Jeff Bezos’s Big Space Adventure Saves Us All?
— Report: Trump Allegedly Implicated in Company Crimes
— Venture Capital’s Most Contentious Breakup Just Added a Messy New Chapter
— The 2022 Candidate Slate: Send In the Clowns!
— Of Course Trump Has Scammed Millions From His Supporters
— From the Archive: The Star-Crossed, Politicized, Complexified Romance of Jeff Bezos
— Not a subscriber? Join Vanity Fair to receive full access to VF.com and the complete online archive now.