F1 schedule: How to Watch the Miami Grand Prix 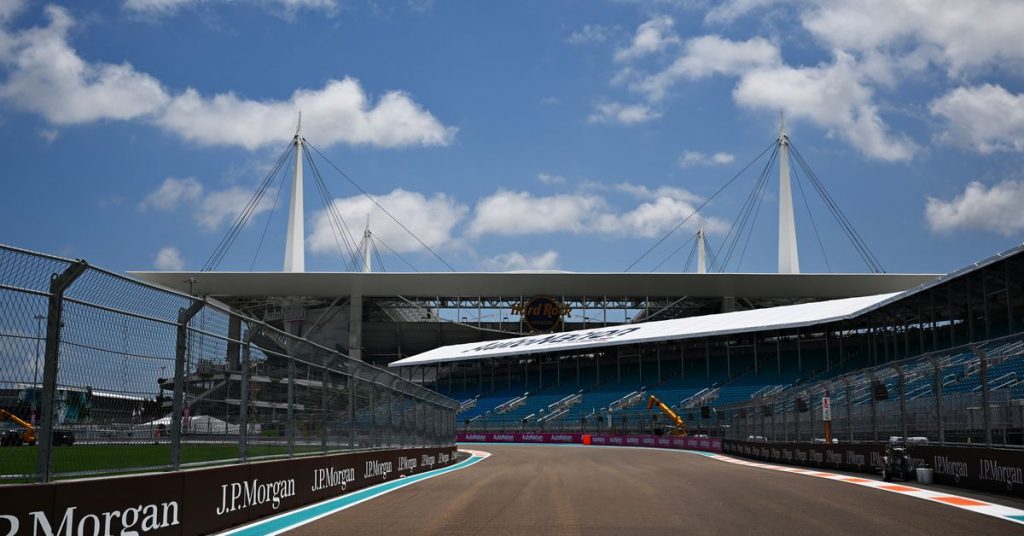 Exactly when a sport “arrives” in America isn’t binary, but a gradual process with pivotal moments of public awareness. Where Formula 1 currently sits on its trajectory in the States is debatable, but the direction the series is headed is undeniable.

After missing out on the 2020 F1 schedule due to COVID restrictions, over 400,000 fans flocked to the Circuit of the Americas (COTA) in Austin, TX last fall. Part of that spike in interest has been thanks to Netflix’s Drive to Survive series, which is credited anytime a team principal, driver, or reporter discusses F1’s growth in recent years. The next seminal moment in the sport’s relationship with America lands this weekend with the debut of the Miami Grand Prix.

Part of a ten-year deal, Miami marks the first time in nearly four decades the US has hosted two F1 races in the same season and becomes the 11th American circuit to host a Grand Prix. Tickets sold out almost immediately with reports of a few hundred thousand on the waiting list. To echo that level of demand, on the latest F1 Nation Podcast, McLaren CEO Zak Brown stated that he had “never seen this much attention in [his] 20 years in the sport, the number of hospitality and appearance requests, celebrity guests and sponsorship interest.”

Most everyone in the series believes that Sunday will mark the next stage of America’s discovery of Formula 1. TV ratings are steadily improving on ESPN, and Miami could easily land in the top five highest-rated F1 races in US history. With the next TV deal currently being shopped around and a new Las Vegas Grand Prix down the famous Strip coming in 2023, it’s a great time to be an American F1 fan.

The Season So Far

A new set of regulations has seen Ferrari jump into the top spot, while the middle of the grid is at its most competitive point in years. Current Championship leader Charles Leclerc and 2020 title winner Max Verstappen have traded wins in the open four rounds of the season. Ferrari’s Leclerc enters the Miami weekend with a 27-point advantage. Meanwhile, Mercedes, winners of the last eight Constructors’ Titles, continue to struggle with their new 2022 car. Lewis Hamilton sits 7th in the standings after finishing 13th in Australia last time out.

The 19-turn Miami International Autodrome winds through the Miami Gardens and around Hard Rock Stadium, home to the Miami Dolphins. There are three straights and three DRS (Drag Reduction System) zones which should provide plenty of overtaking opportunities. The 3.36-mile circuit (5.412km) is expected to have a top speed of 198mph, making it one of the fastest tracks in F1. Both Valtteri Bottas and Pierre Gasly gave the circuit positive reviews after spending time in the simulator this week. We should be in for a very smooth surface that is designed to provide a high level of grip.

And if a brand new F1 circuit in Miami wasn’t enough, the promotion team has gone above and beyond to make this an event unlike any other on the calendar. The track starts by encircling the NFL stadium from the start/finish line through Turn 4. Passing by the Fountains and through the chicane brings the drivers into the mock Marnia complete with yachts and the visual effect of water. After a long, winding, and extremely fast section heading into Turn 11, we find The Beach which will feature two levels of cabanas, two resort-style pools, and a 24,000 square foot beach. This race will certainly have the Miami vibe.

For those without cable looking to watch the Miami Grand Prix weekend, you can subscribe to F1TV directly to catch every race, qualifying, and practice session throughout the 2022 season.

DraftKings Sportsbook is offering odds on the race. Just like the season thus, far there is a two-car battle at the top. Max Verstappen is a slight favorite at +100, followed by Charles Leclerc (+125). Their teammates are currently set at +1200 for Sergio Perez and +1600 for Carlos Sainz. Farther back is seven-time Champion Lewis Hamilton and Lando Norris (both at +4000) and the new Mercedes driver George Russell at +6000.

What to Watch For

It all kicks off Friday afternoon as Formula 1 welcomes in the brand new Miami Grand Prix.

Before you head out, check out the F1 drivers attempting to guess the city attached to various NFL, NBA, MLB, MLS & NHL teams. There are a lot of Boston guesses.