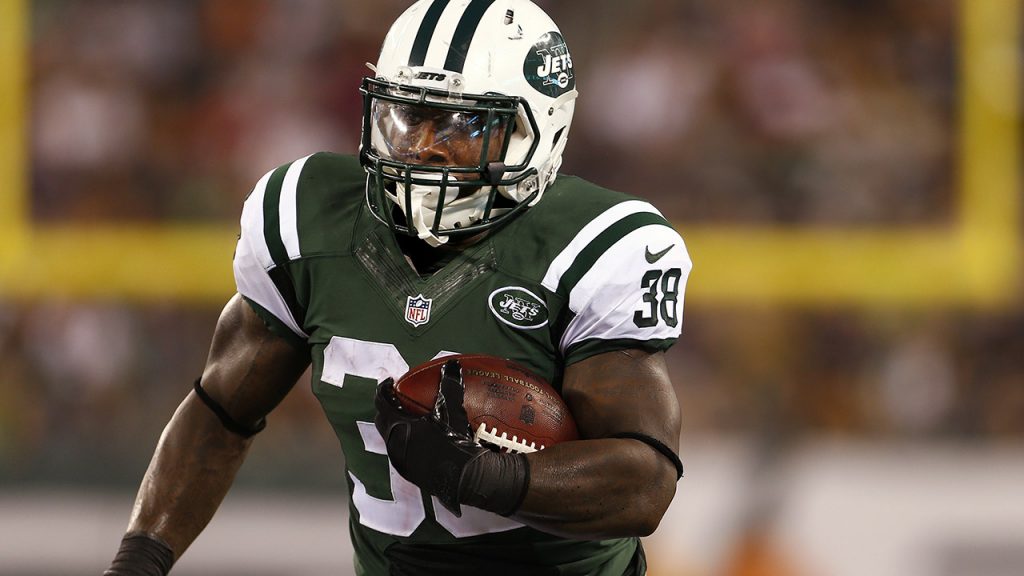 Former NFL running back Zac Stacy is on the run following a domestic violence incident at his Florida home over the weekend involving his ex-girlfriend, police said Thursday.

Stacy appeared to beat his girlfriend in an incident at their home over the weekend. The video appeared to show Stacy throwing the woman into a television stand and being hit, according to TMZ Sports. The gossip site, citing a restraining order application, reported that the woman said he punched her several times in the head.

Zac Stacy of Memphis Express runs for yards during an Alliance of American Football game against the Birmingham Iron at Legion Field on Feb. 10, 2019 in Birmingham, Alabama.
(Joe Robbins/AAF/Getty Images)

Oakland police said responding officers were at the scene “within two minutes” and Stacy had fled the scene.

“Officers arrived on scene within two minutes and were able to determine a domestic violence battery had taken place and that the suspect, Zackary Stacy, had fled the scene,” Oakland police said. “Officers continued to search for Stacy, and the case was forwarded to the investigations unit of the Oakland Police Department to establish probable cause to secure a warrant for Stacy’s arrest.”

Oakland police said the Orange County Sheriff’s Office tried to capture Stacy because he was out of Oakland authorities’ jurisdiction, but the former NFL player had fled the state.

“Efforts are underway to capture Stacy, and we would urge him to turn himself in and face the criminal charges,” authorities said.

Zac Stacy of the New York Jets in action against the Philadelphia Eagles during a pre-season game at MetLife Stadium on Sept. 3, 2015 in East Rutherford, New Jersey.
(Rich Schultz /Getty Images)

The incident drew ire from players across the NFL.

Green Bay Packers star Davante Adams made clear where he stands after watching a video.

“I’m not retweeting the video but ZAC STACY NEED TO BE THROWN UNDER THE JAIL. Any man that puts his hands on a woman is a coward. Can’t believe what I just saw,” Adams tweeted.

Stacy was serving as a youth ambassador for the TransPerfect Music City Bowl before the incident. Officials said they cut ties with him.

“Based on the video and domestic violence report regarding Zac Stacy,” officials said, via TMZ Sports. “The TransPerfect Music City Bowl has terminated the relationship with Zac Stacy effective immediately.”

The video in question is chilling.

The woman can be heard begging for him to stop while a 5-month-old looks on while seated on the couch. At one point, the woman can be seen being body-slammed into one of the baby’s bouncy seats.

Stacy, who retired from the NFL in 2017, left before police arrived, and the woman said she visited the hospital after the incident and had bumps and bruises, the report said.

Zac Stacy of the Memphis Express looks on during the game against the Birmingham Iron at Liberty Bowl Memorial Stadium on March 24, 2019 in Memphis, Tennessee. Memphis won 31-25 in overtime.
(Joe Robbins/AAF/Getty Images)

Stacy’s agency didn’t immediately respond to a request for comment from Fox News.