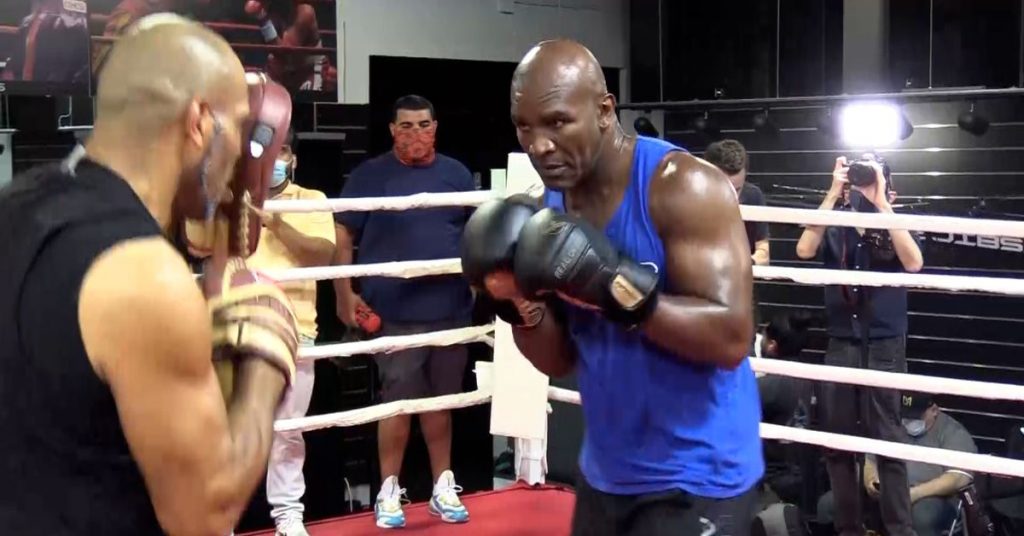 Despite the concerns of many in the combat sports community, Evander Holyfield feels he’s as ready as he’ll ever be to step back inside the squared circle.

This Saturday night, the former undisputed cruiserweight and heavyweight champion will do exactly that when he faces former UFC world champion Vitor Belfort in the main event of Triller Fight Club’s Legends 2 event. The card takes place at the Seminole Hard Rock Casino in Hollywood, Fla.

Holyfield, 58, hasn’t competed since picking up a 10th round TKO win over Brian Nielsen over a decade a go. While “The Real Deal” was previously tied to a potential third fight with Mike Tyson, along with booking a June matchup against Kevin McBride that was ultimately postponed, he was still looking for the chance to get back in the ring.

When Oscar De La Hoya tested positive for COVID-19, which then shifted Saturday’s entire event from Los Angeles to South Florida, Holyfield didn’t hesitate once he got the call.

“I feel good about it,” Holyfield told MMA Fighting on Wednesday. “I was training and was in shape enough that I feel that I could do it.

“They talked to my manager and he said, ‘Let me ask Evander.’ I said I would do it, and then I had to ask the question: ‘How in the world was this guy gonna do this with Oscar and then come in and do it with me? Does he know that we’re different?’”

The fight will be contested over eight two-minute rounds in the heavyweight division, which is over 200 pounds, under full professional rules.

Of course, with over a decade between bouts, along with a 56-fight professional career that saw him step in with some of the greatest fighters of all-time, there are concerns about Holyfield stepping back in the ring. The California State Athletic Commission would not allow Holyfield to compete, thus the change in venue.

Holyfield was asked about those concerns, and if he would be able to alleviate them ahead of the fight with Belfort.

“The thing is, I have more experience in boxing,” Holyfield stated. “The fact of the matter is I would have a problem if I was gonna do MMA, because that ain’t what I do. But I know I do boxing and I took care of myself real well. The fact is, I’m going in there with an MMA guy, and yeah, he does a couple of things right. He knows how to throw punches and he can deliver hard shots, but I can do more. I just bring more to the game because [of all] the years of doing it.

“I kind of feel that you’ve got to have a lot of confidence to get in the sport and get it with me when I’ve been doing it a lot longer. I’ve been doing boxing since I was 8 years old. I know good and well I ain’t gonna come down and try to wrestle them guys. I don’t want to have to watch out for a foot or a chokehold, someone grabbing my arm and breaking my arm. I just said, ‘I want to take a chance.’

“Realistically, if you’re coming into boxing, you’re really coming into my field,” he added. “I just want everyone to know that you have to be smart with what you want to do.”

After a storied career which includes 44 victories, 29 by way of knockout, Holyfield is beyond making a prediction for the fight that seemingly came out of nowhere.

“The thing is, at the end, all I know is somebody’s hand is gonna be raised.”