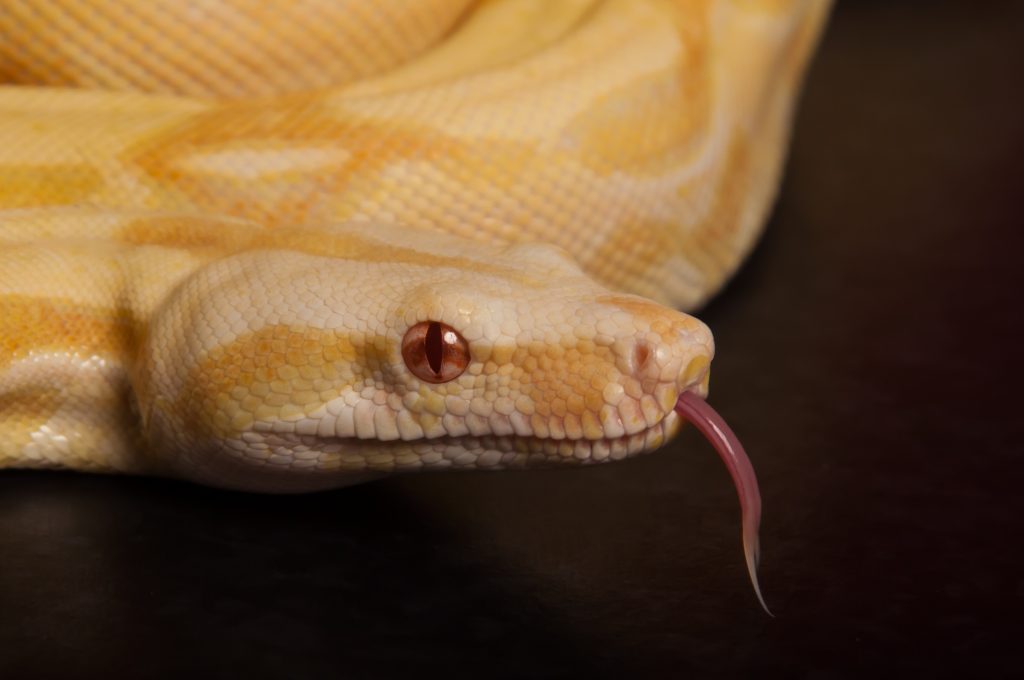 An enormous albino boa constrictor weighing more than 50 pounds has been caught in a Florida backyard.

Husband and wife duo Rhett and Taylor Stanberry, who remove and relocate snakes in South Florida, received a call from a homeowner saying that they had seen a “huge python” in their backyard.

Eventually, the homeowner sent the pair pictures of a large white and yellow snake, which was lurking in some bushes.

“Well this is crazy,” Rhett Stanberry said in a Facebook post on Saturday describing the moment that he saw the images.

But as it turned it out, the snake was not a python as the homeowner had suggested.

“When we get there, we are greeted by this huge albino boa constrictor!” Stanberry said.

Boa constrictors are large, non-venomous snakes found in tropical South America and parts of Central America that are often kept as exotic pets.

They are ambush predators that kill their prey using a method known as constriction. This technique involves the snake wrapping itself around the prey and gradually squeezing the animal to death with its powerful muscles, before consuming it whole.

Boas have jaws lined with small, hooked teeth that are designed for grabbing and holding prey. In the wild, the snakes will eat almost anything they can catch, but tend to consume small- to medium-sized mammals and birds.

When the Stanberrys arrived at the property and saw the rogue albino boa for the first time they were surprised by its size.

“That is the fattest boa constrictor I’ve ever seen,” Rhett Stanberry said in a YouTube video documenting the catch. “I almost didn’t even think it was real.”

He said the snake was likely a pet that had been been released intentionally or had escaped from its owner’s property.

In the Facebook post, Taylor Stanberry said the boa constrictor may have been out in the wild for some time, likely eating rabbits and possibly other animals.

The snake catchers eventually managed to remove the boa constrictor from the property. Its huge size meant the snake was unable to move very quickly, making the job easier.

After removing the snake, the Stanberrys weighed and measured it. They found that it measured 9.5 feet in length and weighed in at 52.6 pounds.

“This is as big as they get,” Rhett Stanberry said in the video. “You’ll hear they get bigger, but it’s pretty rare. And this one is a color morph from the pet trade—she is absolutely stunning.”

The boa is being kept at the pair’s facility, and they are building a “large and well-constructed” cage for the snake to make sure it does not escape into the wild again.

Newsweek has contacted Rhett and Taylor Stanberry for comment.