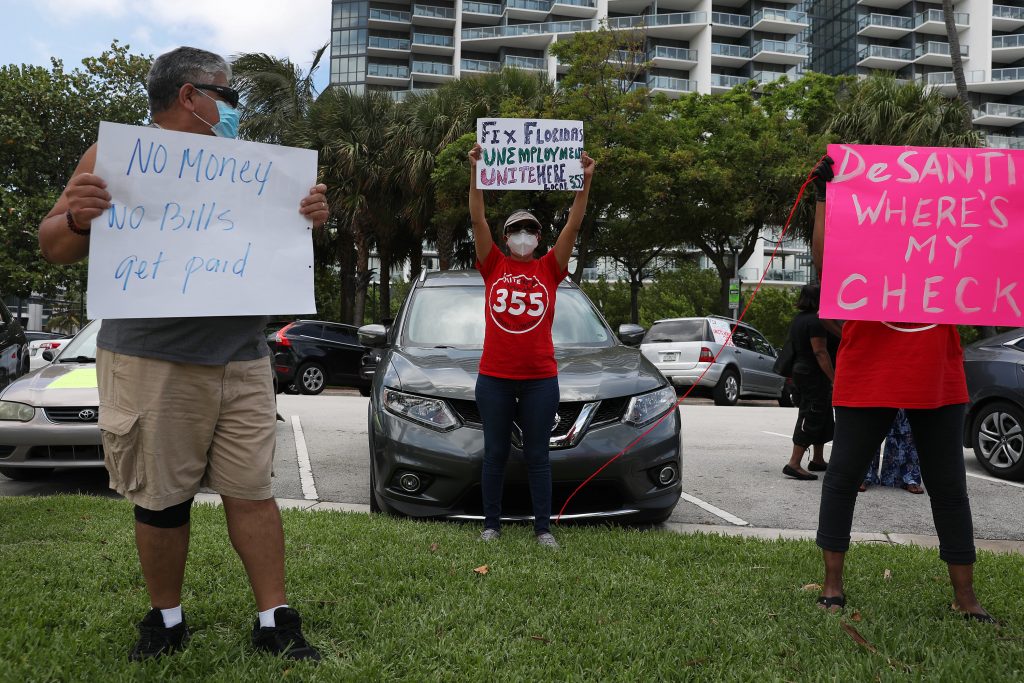 On September 6, the federal government’s enhanced unemployment benefits will end. That’s the $300 (formerly $600) additional weekly boost to unemployment payments, which were also extended to millions of workers previously excluded from accessing unemployment, like freelancers, independent contractors, and gig workers. According to Labor Secretary Marty Walsh and Treasury Secretary Janet Yellen, this lifeline was “always intended to be temporary.” It is, they wrote in a letter to lawmakers, no longer “appropriate” for the federal government to help pad states’ meager unemployment checks. Despite this acknowledgment that the pandemic continues, driven by the surging delta variant—which Walsh and Yellen admitted “may also pose short-term challenges to local economies and labor markets”—the Biden administration thinks it’s time to revert back to the pre-Covid status quo, one that was intolerable before the pandemic and is even more so now. The message is clear: You’re once again on your own. This is a form of pandemic amnesia, a willful forgetting of what has worked to keep people safe, housed, and freed from the burden of debt as a global health crisis rages on.

According to one analysis, almost eight million people will have their benefits end come early September. The example of Republican-led states that cut off their residents from the federal enhanced unemployment benefits months before they were slated to expire gives us a preview of what’s to come. One study showed that prematurely ending the extra benefits did little to improve the economies of those states, the ostensible rationale for stopping them. Seven out of eight people continued to be unemployed, hardly the result one would expect if conservative squawking that people were refusing to look for work because they were living it up on the government’s dime was based in any sort of reality. The revoking of those benefits did, however, have the effect of forcing individuals and families to reduce their spending by 20 percent, a total loss of $2 billion for those states in just one month.

For people like Florida resident Meli Feliciano and her family, Governor Ron DeSantis’s decision to end her much-needed unemployment relief has been yet another stressor added to a year filled with them. Feliciano, who lost her job as an office manager earlier in the pandemic and whose husband was temporarily unable to work due to illness, relied on her unemployment checks to pay the family’s bills. When the benefits temporarily lapsed last year, the couple sold one of their cars, a necessary move that has now limited her job options. She recently described a typical day to The Washington Post: “I have to call about this application. I have to call about rental assistance. I have to get in touch with the landlord. I have to call and reschedule this bill and post it out further so I can juggle it.” Merely keeping their heads above water has become its own full-time job. Feliciano put it this way: “It’s like playing chess, and I suck at playing chess.”

This latest arbitrary end date of a Covid-19 relief program was based on nothing more than wishful thinking—that the pandemic would be over by now, and that our previous normal was sufficient. The same has been true of much of the temporary relief meant to soften the devastation of the pandemic: The federal eviction moratorium, extended one final time in a weakened form, now ends in early October, and for holders of federal student loan debt, the relief offered was merely a pause on their payments. The pause, also extended this summer for what is meant to be the last time, will end early next year. Emergency rental assistance will end once the pot of money dries up. As much as these programs have been a crucial lifeline for millions of people, they’re also just a delay of the inevitable—a return to a life of paying off debt, or as Astra Taylor put it in The New York Times, the “humble aspiration of owing zero dollars.”

But the lessons we should take away from pandemic aid efforts are clear. In 2020, according to several research studies, the poverty rate was cut in half, despite a sharp drop in employment. The reason for this dramatic decline in human misery is both obvious and, in a country where poverty is typically met with indifference or punitive policy, groundbreaking. Giving people money—in the form of no-strings-attached relief checks, more generous unemployment benefits, and other forms of cash—simply works. As Vox’s Dylan Matthews wrote, surveying recent studies, “​​Much of the credit for lower poverty in their models goes to the stimulus checks.” But, again, those checks were temporary. Matthews continued, “That means that, absent further government action, poverty could be set to increase again in 2022.” Jason DeParle of The New York Times summed it up in July: “Without further expensive new measures, millions of families may find the escape from poverty brief.”

For all that the Biden administration, to its credit, has started to push back against the scarcity mindset and rebuild the social safety net, its signature programs have been limited not just by their ephemeral nature but by the too-modest scope of their ambitions. But in them are the seeds of what could come. Many people have now experienced what a more financially secure life could look like, developing muscle memory that can be flexed to imagine a different future. Shortly before his death last fall, the anthropologist and anarchist intellectual David Graeber called on all of us to fight the amnesia that so easily comes in the wake of a crisis, to not forget the “actual reality of human life”—that we are “a collection of fragile beings taking care of one another.”

“It is imperative that we not slip back into a reality where all this makes some sort of inexplicable sense, the way senseless things so often do in dreams,” he wrote. Politicians across the ideological spectrum have framed the end of extra benefits as something sensible, when in fact, it is senseless. We should remember what actually worked to improve people’s lives, and push our leaders to fight the politically convenient amnesia that says everything is fine.