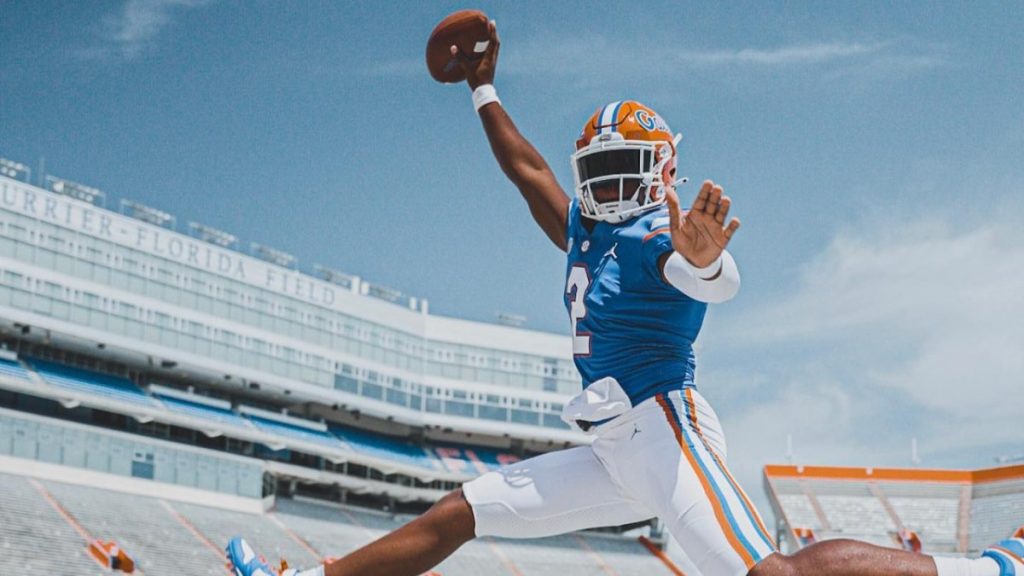 The Gators have secured their signal-caller in the class of 2024, as Willis (Texas) quarterback DJ Lagway announced his commitment to Florida on Wednesday during a ceremony at his high school.

Of note, Lagway opted for Florida over Southern California, Clemson, Texas A&M, Oklahoma and Baylor among other programs.

Lagway made his way to Gainesville on multiple occasions throughout his recruitment process, with two visits in-season when the Gators played host to Kentucky and LSU.

He had the opportunity to grow familiar with the offense during those trips east as he watched Anthony Richardson operate. He left impressed with the system Billy Napier operates, which leans heavily on the ground game to set up big plays through RPO and play-action concepts.

“I’d say it fits me perfectly, especially with just being out in space being able to make plays with your legs and also with your arm,” Lagway told All Gators after his first in-season trek to campus. “I feel like it would fit me perfectly.”

Lagway, 6-foot-2, 225 pounds, is considered the No. 4 quarterback and No. 20 overall prospect in the class of 2024 by the On3 Sports consensus rankings. In his debut season as a starter, Lagway connected on 55.5 percent of his passes for 1,579 yards, 17 touchdowns and two interceptions, adding 715 yards and six scores on the ground.

He improved on those numbers as a junior, accounting for 2,081 yards, 24 touchdowns and five interceptions while completing 67% of his passes. His feet have earned 517 yards and seven scores.

“[Florida’s coaches] say they like the way I can just be able to keep the play alive,” Lagway shared. “You know, being able to do both throwing and running just as equally, being able to be that dynamic on the ground in the air.”

That, accompanied by his relationship with the staff and Florida being his “dream school” helped lure the coveted prospect into his pledge

“I’ve always liked Florida as a school, as a kid I always liked watching them,” he told AllGators before a trip to campus in July. “I mean, growing up it was my dream school. I’m always excited to get back down there.”

Since Dec. 2021 when Napier took over as UF’s head coach officially, the Gators have landed a total of four quarterbacks, first being Ohio State transfer Jack Miller III followed by underrated 2022 recruit Max Brown, 2023’s No. 3 signal-caller (per the SI99) Jaden Rashada and now another elite talent in Lagway.

He joins linebacker Myles Graham and running back Chauncey Bowens in the Gators 2024 commitment class.

Stay tuned to AllGators for continuous coverage of Florida Gators football, basketball and recruiting. Follow along on social media at @SI_AllGators on Twitter and Florida Gators on Sports Illustrated on Facebook.