Eight bold predictions for the Florida Gators in 2021 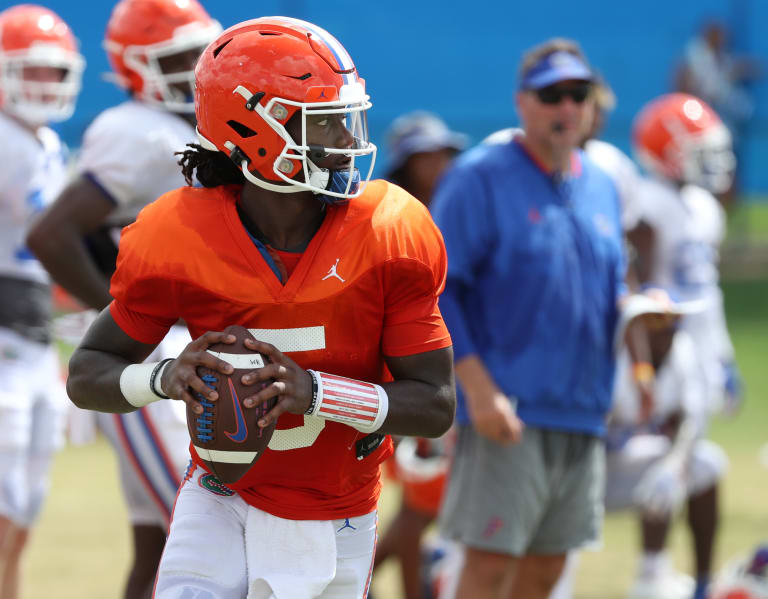 In less than a week, the Florida Gators will kick off the 2021 season against FAU.

Gators Territory will make 10 bold predicitions for the 2021 season, which we will revisit at the end of the year.

Justin Shorter will lead the team in receiving

While a lot of fans are looking for Jacob Copeland to live up to the lofty expectations he arrived to Gainesville with or if Xzavier Henderson will have a breakout sophomore campaign, Shorter has quietly put together a great offseason.

“From the minute at the start of practice to the end, he is grinding, giving you everything that he has. The great thing of that is you see it in the results,” Dan Mullen said of Shorter. “I think he’s playing at a much, much higher level than he did last year. Much more consistent level, much bigger playmaker level, than he did last year. It’s not a surprise with how hard he works day in and day out, you see that improvement.”

The former five-star transfer from Penn State may be flying under the radar in the offseason but he’ll end the year with the most receptions.

Florida will finish the season a top 30 rushing team

Florida rushed for 1,575 yards in 2020, finishing 96th in the country with a 131.25 yard per game average. It’s no secret that the Gators’ offense will be drastically different this year. With a quarterback who can run like Emory Jones and a deep stable of running backs, we expect Florida to jump up significantly in the run department.

Finishing in the top 30 in terms of rushing will likely mean averaging 200 yards a game. That’s a far cry from the team Florida was in 2020 but should be their recipe for success this year.

Emory Jones will play more than 85% of the snaps

Florida has Anthony Richardson, who is a local kid with a lot of potential and the physical tools that remind of a young Cam Newton. However, this is Emory Jones’ team and Emory Jones’ time.

“Honestly, my role I believe is just to go out there and be clean-up, kind of,” Richardson said during the last week of fall camp. “I feel like whenever Emory needs a break and they need me to come out there, I have to bring the same intensity Emory’s bringing and bring the same energy, just all of that, just be the clean-up. So whenever he does his thing, I come in there – just a 1-2 punch. Never let off the gas.”

Richardson’s time is coming but this is Jones’ team.

Emory Jones will lead the team in rushing

In 12 years as a head coach, a quarterback has led Dan Mullen’s team in rushing just three times. Dak Prescott did it twice (2013, 2015) and Nick Fitzgerald once (2016). Emory Jones will make it four this season. Jones has the capability to take off whenever and the ability to turn a broken play into a huge gain. Whether it’s designed runs or Jones taking off on his own he’ll be the engine that makes the Gators’ offense go.

Kris Bogle will lead the team in sacks

Zach Carter led the team in 2020 with five sacks and tied for the team lead with 9.5 tackles for loss alongside Brenton Cox. This year it will be Kris Bogle who leads the team in those categories.

Bogle has all the tools and with other guys on Florida’s defense demanding double teams, Bogle should be free to rush the quarterback and will turn into a beast in 2021.

“I think Khris has really kind of taken another step of being ready to play, has a lot of flexibility within his game,” Mullen said. “He’s a guy that, to me, is really stepped up special teams-wise, and that shows. So I think he’s really, you know, kind of taken a huge step forward from a young guy that was just here and there as a rotating guy on the field, getting some reps into a, you know, I guess if we were NFL and we had to cut it down to 53, into a guy that would be on a 53 man roster.”

Florida will finish with a top-25 defense

Well, we said bold, didn’t we?

Now I imagine if you’re reading this you probably look like this picture of Todd Grantham but hear me out.

In Mullen’s first two years the Gators finished with the 28th and 9th ranked total defenses in the country. That plummeted to 83rd in the country last year but there were a lot of extenuating circumstances in 2020. For all the hate that Todd Grantham has received, he’s a very smart football mind with more than 30 years of experience and he didn’t forget how to coach or call plays overnight. Mullen gave him the vote of confidence by keeping him on staff and he’ll repay that with a solid defensive unit this year.

Jason Marshall will lead the team in interceptions

Kaiir Elam is the preseason All-American and the future first round pick. That means teams will likely go away from Elam and that’s where the other cornerback spot gets tested. Marshall is making a case to be the starter there, leading the team in interceptions in fall camp.

Between his size, skill, and demeanor, he’s everything you want at the position and we think this freshman will become a household name in 2021.

Florida will win the SEC East

The talk all offseason is about Alabama and Georgia and their eventual matchup in the SEC Championship game.

It makes sense when you look at the schedule. Florida pissed off the schedule makers, drawing LSU and Alabama, while Georgia gets Auburn — and a first year head coach, and Arkansas. Alabama is, well, Alabama and have been to Atlanta six times since 2012.

Florida’s road may be more difficult but they’ll be able to beat Georgia in Jacksonville for a second consecutive year and they’ll represent the East in Atlanta.