Education Dept. Will Reimburse Florida District That Had Funds Held Over Mask Mandate 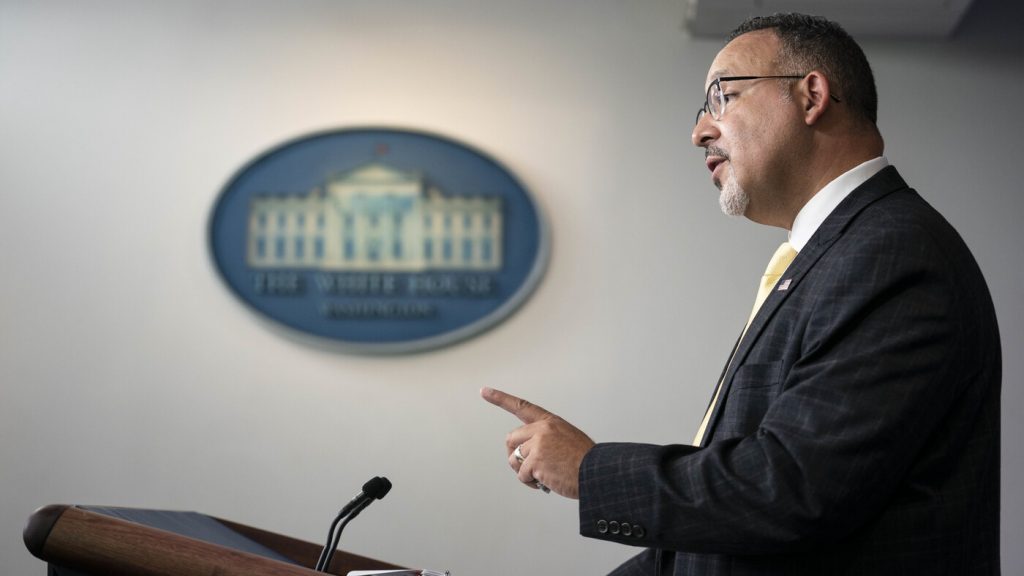 Miguel Cardona, U.S. secretary of education, speaks during a news conference at the White House on Thursday, Aug. 5, 2021.

Miguel Cardona, U.S. secretary of education, speaks during a news conference at the White House on Thursday, Aug. 5, 2021.

The U.S. Department of Education announced Thursday that it would send roughly $148,000 to one Florida school district, Alachua County Public Schools, reimbursing it for money that has been withheld by the state.

The award is the first under the department’s new Project to Support America’s Families and Educators (Project SAFE) grant program and the latest salvo in an escalating fight over masking in schools between Florida’s Republican governor, Ron DeSantis, and President Biden’s secretary of education, Miguel Cardona.

At the end of July, DeSantis signed an executive order banning school districts from requiring that students wear masks. Nevertheless, several school boards voted to require masking in defiance of the ban. In response, the state moved to penalize two of those districts, in Alachua and Broward counties, by withholding state funding equivalent to the monthly salaries of the school board members who voted to defy the mask mandate ban.

So far, the state has withheld two months of board member salaries.

Alachua County Public Schools Superintendent Carlee Simon learned this morning, in a phone call with Cardona, that Alachua would be the first district to receive a Project SAFE grant. In a statement Simon expressed gratitude for the funding “but I’m even more grateful for [the Biden administration’s] continued support and encouragement of our efforts to protect students and staff and to keep our schools open for in-person learning.”

“With these grants, we’re making sure schools and communities across the country that are committed to safely returning to in-person learning know that we have their backs,” Cardona said in a statement.