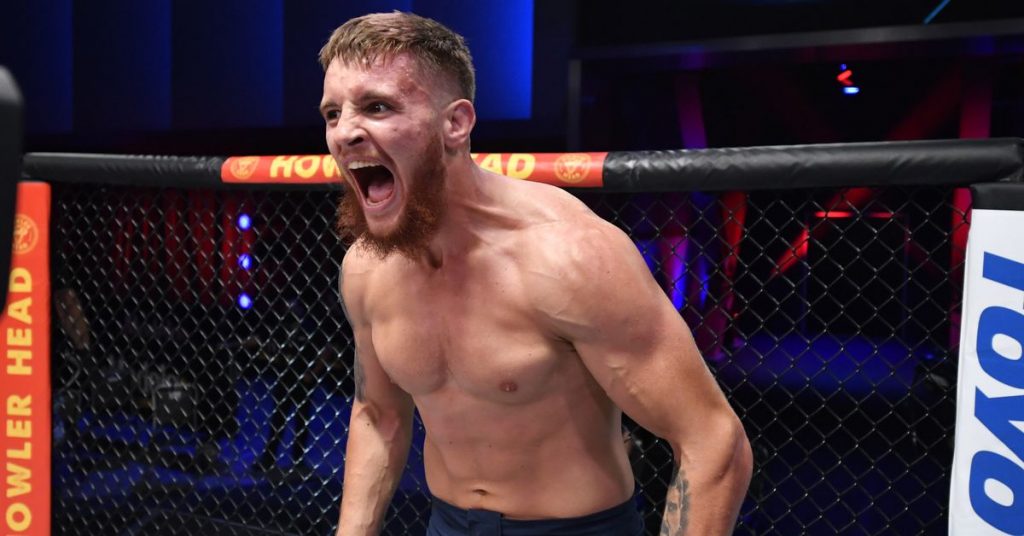 One of Ukraine’s top prospects is now a UFC fighter.
Light heavyweight bruiser Ihor Potieria won a UFC contract Tuesday night at Dana White’s Contender Series with a scintillating main-event win over previously unbeaten Polish up-and-comer Lucasz Sudolski. A 25-year-old with 14 career first-round finishes, Potieria (20-2) added to that résumé with a flurry of punches that dropped Sudolski less than four minutes into the bout.
The finishing sequence saw Potieria down his foe with a left-right combination followed by a lunging right hook and a swarm of fight-ending shots.
“The kid’s 25 years old, 6-foot-3, 205 pounds,” White said. “I’m talking about odds, which really don’t mean much, but he was a 3-to-1 dog in this fight, so the oddsmakers were looking at this kid and thought this kid was going to get destroyed. He did the exact opposite, finished impressively. There’s no way that I don’t bring this kid in.”

The night’s lone other UFC contract went to Mexican lightweight Daniel Zellhuber (12-0), who along with Brazil’s Lucas Almeida (12-1) stole the show with a riveting back-and-forth battle of undefeated prospects.
A 22-year-old nicknamed the “Golden Boy,” Zellhuber stormed back from a slow start after losing the striking battle by a 62-29 margin in the opening round, then took control in rounds two and three with a barrage of long combinations and slick head movement to win via unanimous 29-28 scores.
“I was a little bit dizzy the first round but my coach slapped me in the corner and told me, ‘Hey, if you don’t go out there and fight like a Mexican, you’re going to lose the fight,’” Zellhuber said. “So I put my balls on and I went out to fight him.”
White said afterward that he was also impressed with Almeida and told the 30-year-old lightweight that the UFC will sign him if he gets one more win on the regional circuit.

@GoldenboyZell is feeling himself at the end of the 2nd.[ #DWCS is LIVE on @ESPNPlus ] pic.twitter.com/TPBqEYblMZ— UFC (@ufc) September 29, 2021

In the night’s co-main event, Brazilian middleweight Caio Borralho (9-1) won a grinding affair over Canada’s Aaron Jeffery (10-3).
Although he landed three takedowns, Borralho was unable to keep Jeffery down for any sustained length of time, so large portions of the fight were instead contested in the clinch against the fence, with Borralho getting the better of the majority of the exchanges. In the end, the judges scored the bout 29-28, 29-28, and 30-27 in favor of the 28-year-old, giving Borralho his eighth straight win, but not a UFC contract.

Elsewhere on the night, Russian heavyweight Rizvan Kuniev (11-2-1) smothered Brazil’s Edivan Santos (12-3) en route to a third-round TKO win in the opening bout of the card.
The heavyweight champion of Khabib Nurmagomedov’s MMA promotion Eagle Fighting Championship, Kuniev scored takedowns in all three rounds and overcame a first-round eye poke to dominate Santos on the mat. With a weight advantage that totaled more than 30 pounds, the 28-year-old Russian poured it onto his exhausted foe with hammering shots from top position to secure a finish just one minute into the third round, however the performance wasn’t enough for Kuniev to earn a UFC contract.
“Not everything went as I planned it,” Kuniev said through a translator. “I got hit in my eye, poked in my eye, so I can’t really see with my left eye right now. I was hoping that I would work more standing up but I had to take it to the ground.”

Complete DWCS Season 5, Week 5 results can be seen below.