‘Don’t let me die’: Inside a COVID-19 unit in Florida’s capital city amid a surge in cases 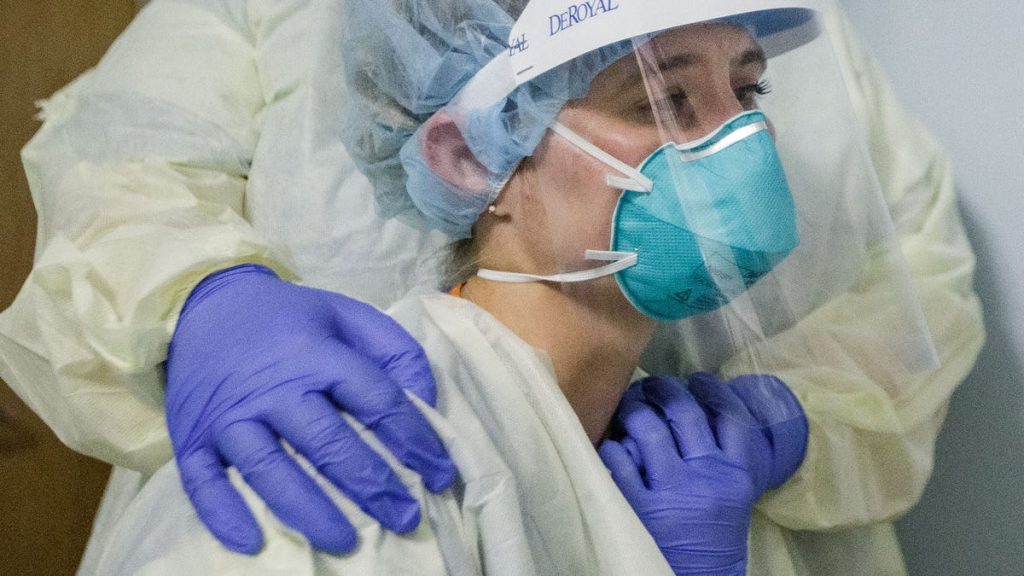 The curtain divides every patient room in two. On one side, a man gasps for air every 20 seconds as nurses gather around his bedside. They hold hands, hug one another and comfort the man as best they can.

“Knowing that their family can’t be there at that time, you (the nurse) are the one that is combing hair, playing music,” says registered nurse Emily Brown, who works at Tallahassee Memorial HealthCare. “We’re praying; we’re holding their hands.”

One nurse uses a rag to wipe his eyes.

From the other side of the curtain, another man asks for a glass of water. A nurse chuckles. She says, “I think we can get you that.”

He doesn’t know his roommate was just given morphine to provide comfort in his final moments.

TMH has three levels of COVID-19 patients cared for in different areas of the hospital.

Red level, most often, is where people die.

And people are dying. Daily. At a faster rate than ever before.

At least two people have succumbed to the virus each day this week at TMH. More than 60 people have died so far in August.

Florida is among eight states that have already surpassed their previous records for COVID-19 hospitalizations. The state has seen some of the highest rates of cases, hospitalizations and deaths, along with some of the lowest vaccinations rates in the country.

This week, Tallahassee has experienced the largest surge in cases and hospitalizations since the start of the pandemic in March 2020.

Monday, when the Tallahassee Democrat, part of the USA TODAY Network, was allowed in to the ward, there were 125 patients admitted to TMH. Of those patients, 107 were unvaccinated and two were children.

There were 43 patients considered critically ill in the ICU and 39 of them were unvaccinated.

By the end of the day, there had been three deaths and 12 new patients admitted.

There will be more. The sick keep coming.

Florida tops the nation in new cases: As COVID cases spike in its rural Big Bend, many still fear the vaccine more

Fact check: Florida doctors did not walk out on patients in protest of low vaccination rates

‘COVID is all I know’

Brown, 23, is from Bristol, a rural town where being vaccinated is uncommon.

She started as a nurse at TMH in February 2020, not knowing what was in store as she began her career.

“COVID is all I know as a new nurse,” Brown says. “I don’t even know if I would know how to take care of a regular person at this point. If a patient can breathe, that’s good for me.”

Brown recruited best friend Sally Fowler, 21, to join her at TMH. Fowler’s experience was similar to Brown’s. She began as a nurse when the COVID-19 floor had reopened into a normal hospital floor.

About a month later, the second surge hit.

“For this to be my first dose of nursing, it was a shell shock, because you don’t learn about COVID in nursing school,” Brown says. “You don’t learn how to take care of these patients or what lab values to look for.”

Last week, Fowler lost her first patient. The woman had been on a ventilator.

“Patients get tired. That is a lot of oxygen coming at them all the time,” Brown says. “They get irritable. They get anxious, and the meds we give them for anxiety and irritability mess with oxygenation.”

Brown was in the room with Fowler as she consoled her patient. They helped her make one last call to her family.

Brown moved her oxygen mask just enough so she could talk to them.

They recall the woman begging her family — “Please, just let me go. I can’t do this anymore.”

The family told her, “You’re the strongest mother I know. Thank you for fighting this long.”

But the family asked the nurses, “Can you please make this quick?”

“I remember that conversation, and that’s something I will remember 10 years from now,” Brown said.

‘I tried to plow through it’

Tanya English and her husband Brian held off on getting the vaccine because they falsely believed they had more immunity to COVID due to their blood type.

English, 60, is a retired educator and her husband is a financial planner.

In early August the couple attended a fundraiser for senior citizens. The following Monday, Brian opted to get vaccinated to protect his clients. The next morning, he  started experiencing symptoms. He thought they were just side effects from the shot.

They weren’t. He had COVID.

About 16 people who attended the event tested positive, including English.

Brian was admitted to the hospital, where he was treated for a week.

“I tried to plow through it,” English said as she struggled to speak. “I should not have.”

English and her husband know others impacted by COVID-19. Their neighbor died on the Fourth of July in the hospital. His wife was admitted and recently released. Their best friend is in the ICU.

English said she plans to get vaccinated as soon as she can.

“My prayer is with the ultimate healer and when it’s time, it’s time,” she said between breaths. “But I think I still have a little while.”

When English agreed to have her portrait taken Monday, she said, “If it means I can help one person I’ll do it.”

‘We have no control over death and life’

Regina Bolde, 50, has been a nurse for almost half of her life. She’s worked at TMH on the same floor since 2015. Since the start of the pandemic, Bolde’s view of her career has shifted.

“I never saw myself being a hospice nurse,” she said in the bustling yellow-level COVID-19 hall. “When COVID came, we started doing everything.”

Last Christmas, Bolde had a patient who was rapidly deteriorating. The man, about 60, begged Bolde to stay and help him as his anxiety mounted. Bolde held his hand till he was transferred to the ICU.

He didn’t make it.

“It was heartbreaking,” she said. “But we have no control over death and life.”

Bolde has helped patients contact their families to say goodbye.

She helped a father FaceTime his son before she and the other nurses stepped out to give them privacy. From the other side of the door, Bolde could hear their conversation.

The younger the patient, the harder it is for nurses to watch their health decline, they said.

Bolde is praying for the pandemic to end. She said she tells everyone who will listen: Get vaccinated. Wear a mask. Practice social distancing. Stop the spread.

“People think it’s not real, but I try to tell them that this is real and people suffer a lot and they die,” she said. “In one week we can have three or five people die.”

The halls of the yellow-level COVID unit are filled with nurses covered head to toe in PPE, without a patch of skin showing. They work from the halls rather than the nurses’ station to keep a close watch on all their charges.

Many hold portable fans toward their faces as sweat drips from foreheads.

To leave the COVID unit, you have to “doff” (take off) your gown, booties, hair net, suit, shield and gloves, sanitizing in between each piece removed. This must be done every time someone wants to eat, drink, or use the restroom. Then a new set of personal protective equipment must be “donned” (put on) before reentering the unit.

“It’s very physically draining,” said Kelly Clark, a 28-year-old nurse. “We can’t leave the unit to use the restroom. We can’t drink anything unless we are outside.”

The staff in the units do what they can to keep the mood positive and energy up. It’s the little things, they say.

“Food really does cheer us up and gives a little extra push to get you through the day,” Clark said.

English — the 60-year old COVID patient — treated the nurses to lunch as a way to show appreciation for the care and attention they gave her during her stay.

There are other bright spots, too.

“We had one patient go home last week,” Clark said. The patient was younger than 40. “She was here for weeks and weeks and weeks. At points, we didn’t think she was gonna make it.”

But the day finally arrived when Clark and several other nurses pushed the patient out of the unit in a wheelchair.

“It’s one of the best feelings,” she said.

TMH Chief Clinical Officer Ryan Smith, also a registered nurse, picked up a shift in one of the COVID-19 units a couple weeks ago. He wanted to experience firsthand what the nurses, respiratory therapists and staff go through.

That night he had four patients.

“The first part of my shift, I had my first few patients look at me and say, ‘Don’t let me die,'” Smith said.

“As soon as you remove them from the devices, they no longer made it,” Smith added. “To watch how quickly they dwindle down is the hardest thing for me.”

Nurses and staff struggle daily to wean patients off oxygen. Too often, when it seems like patients are ready to breathe on their own, they quickly get worse.

“The rest of the world can’t see what goes on behind these doors,” he said. “We want COVID to go away, but the reality is that it is here. It’s real. It impacts a lot more people than it should.”