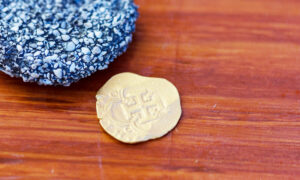 For decades, treasure hunters in search of gold have been diving to explore shipwrecks off the Florida Keys.

In 1985, a mother lode gold haul was found inside the Nuestra de Atocha Spanish galleon which, heavily laden with precious gems and metals, tobacco, bronze cannons, and indigo, was ripped apart by a hurricane in 1622.

Moore, an engineer from Vero Beach, Florida, joined the crew of Mel Fisher’s Treasures salvage vessel J.B. Magruder a few years ago. His father, William Moore, had been part of the crew that recovered the mother lode of Atocha in 1985.

“During one dive, Bill and the other divers found 165 pounds of gold finger bars, chains, and discs!” Mel Fisher’s recounted of that initial find. “His mother, Julie Moore, was also a diver on the Atocha site during the motherload find and was part of many amazing finds as well.”

Zach has also worked as a treasure hunter on the 1715 Treasure Fleet, where he made another exciting discovery. He found an “encrusted object,” which he and his dad conserved together and which turned out to be a “very rare” silver pendant and a rosary with a still intact figure of Christ.

The recent find came just days ahead of the 1985 Atocha Motherlode discovery’s 36th anniversary on July 20—as well as Mel Fisher’s annual celebration and fundraiser.

Share your stories with us at emg.inspired@epochtimes.com, and continue to get your daily dose of inspiration by signing up for the Epoch Inspired newsletter at TheEpochTimes.com/newsletter

Michael Wing is a writer and editor based in Calgary, Canada, where he was born and educated in the arts. He writes mainly on culture, human interest, and trending news.