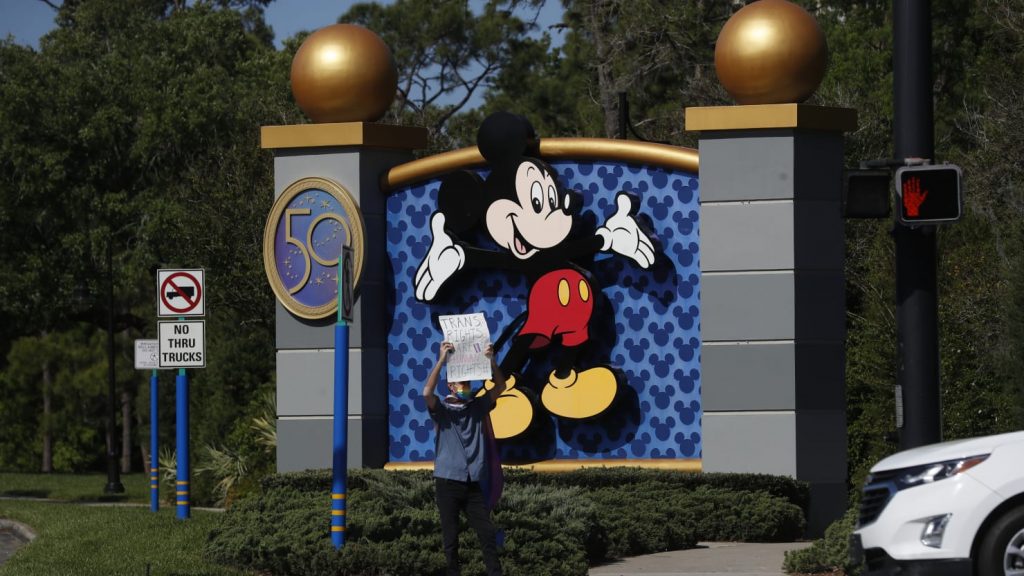 Employees of the Walt Disney Company staged a walkout on Tuesday over CEO Bob Chapek’s tepid response to Florida’s “Don’t Say Gay” bill, which is set to ban lessons on gender identity and sexual orientation at elementary schools in one of the largest states in the country.

GOP Gov. Rick DeSantis has indicated he will soon sign the legislation—officially known as the Parental Rights in Education bill—into law. It’s a measure LGBTQ+ activists and allies and mental-health professionals have condemned as harmful to students, and represents just one part of a broader wave of anti-LGBTQ+ initiatives in right-wing states in recent months.

The bill would outright ban instruction on the key issues with students in kindergarten to third grade, and severely curtail them in other grades. It also invites lawsuits if and when parents believe teachers have violated the new rules. And while Disney’s corporate executives have indicated the company opposes the legislation, they have come under withering attack for failing to publicly resist it before it was too late.

Tuesday’s protest at multiple Disney locations across the country—and among different subsidiaries including Marvel, Pixar, and Lucasfilm—followed a week of smaller-scale walkouts during 15-minute afternoon breaks.

Rebecca Perez, a Disney animator behind Encanto, tweeted a group photo from the walkout with the words: “Supporting our fellow Florida co-workers and LGBTQIA+ community. Solidarity.”

On their website, walkout organizers are demanding Disney permanently stop campaign donations to politicians backing the bill—including DeSantis, who in recent days slammed Disney as a “woke corporation.” According to Newsweek, Disney and its companies have donated at least $250,000 to Republican state senators who voted to pass the legislation, but the company has also become a right-wing punching bag when it has pushed back on the measure.

For his part, DeSantis went out of his way to target trans people on Tuesday, issuing an official proclamation that purported to erase the NCAA swimming victory of elite athlete Lia Thomas.

Walkout organizers are calling on Disney to halt “construction and investment in the state of Florida until hateful legislation is repealed,” make major contributions to nonprofits dedicated to protecting LGBTQ+ families, and launch a brand focused on LGBTQ+ creators and underrepresented voices similar to Disney’s “Onyx Collective” on Hulu. (One problem facing the company: A top LGBTQ+ group, the Human Rights Campaign, previously refused a Disney donation over the way it has handled the legislation, as the New York Times reported.)

Disney did not immediately respond to a request for comment on Tuesday’s walkouts.

Chapek’s stance on the proposed law drew internal ire when, in a March 7 memo obtained by the Hollywood Reporter, he argued that “corporate statements do very little to change outcomes or minds.” Instead, he suggested, the company’s best path to influencing the public was “through the inspiring content we produce.”

Days later, Chapek apologized to LGBTQ+ employees in an email, saying, “Speaking to you, reading your messages, and meeting with you have helped me better understand how painful our silence was.” The message, obtained by Rolling Stone, added, “It is clear that this is not just an issue about a bill in Florida, but instead yet another challenge to basic human rights. You needed me to be a stronger ally in the fight for equal rights and I let you down. I am sorry.”

Employees also joined a “social media storm” scheduled for Tuesday, with many tweeting about why the day-long protest was important to them.

Actress Raven-Symoné posted a video on Instagram indicating that she and the cast of the Disney Channel’s Raven’s Home had walked off set, too. She called the legislation “ridiculous” and declared, “We don’t like it. We’re walking out.”

Actor Oscar Isaac of Disney+’s Moon Knight series shared his own take on the walkouts. Variety reported that, during a virtual press junket, he said: “I guess my comment would be [starts singing] gay gay gay gay gay gay gay gay gay gay gay gayyyyyy! Yeah, it’s an absolutely ridiculous law. It’s insane. It’s insanity. And I hope that Disney as a company comes out as forcefully as possible against this idea. It’s astounding that it even exists in this country.”

Backlash to “Don’t Say Gay” and Disney’s failure to prevent the bill from passing isn’t its only public relations problem.

Last Friday, the company apologized for a Texas high school’s dance performance, which was rife with Native American stereotypes, at the Walt Disney World Resort in Orlando.

The drill team, called the “Indianettes,” had chanted, “Scalp ’em, Indians, scalp ’em” during the show at Magic Kingdom park at the resort.

Disney spokesperson Jacquee Wahler said the racist dance “did not reflect our core values, and we regret it took place.” The performance, Wahler added, didn’t match the audition tape the school sent to Magic Kingdom employees.