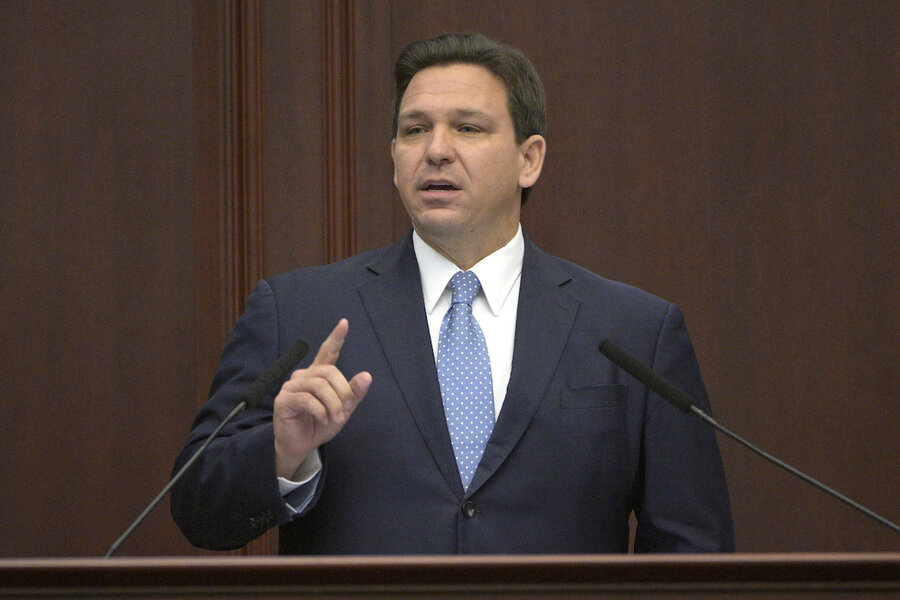 Florida Gov. Ron DeSantis on Tuesday asked the Legislature to repeal a law allowing Walt Disney World to operate a private government over its properties in the state, the latest volley in a feud between the governor and the entertainment giant over what critics have dubbed the “Don’t Say Gay” law.

Governor DeSantis, an ascendant GOP governor and potential 2024 presidential candidate, has battled with Disney over the company’s opposition to the new law barring instruction on sexual orientation and gender identity in kindergarten through third grade.

As lawmakers returned to the Capitol for a special legislative session on congressional redistricting, the governor issued a proclamation that allows the GOP-controlled statehouse to take up bills eliminating Disney’s self-governing district. Republicans quickly filed proposals to do so.

“I am announcing today that we are expanding the call of what they are going to be considering this week. And so, yes they will be considering the congressional map, but they also will be considering termination of all special districts that were enacted in Florida prior to 1968, and that includes the Reedy Creek Improvement District,” Governor DeSantis said at a news conference, referencing the company’s governing district without mentioning Disney by name. He did not elaborate.

Disney representatives did not return an emailed request for comment on Tuesday. It was not immediately clear how the elimination of the district would affect the company or neighboring governments.

The Reedy Creek Improvement District is a private government controlled by Disney World and set up by the state Legislature in 1967 that allows it to provide government services such as zoning, fire protection, utilities, and infrastructure.

The creation of the district, and the control it gave Disney over 27,000 acres in Florida, was a crucial element in the company’s plans to build near Orlando in the 1960s. Company officials said they needed autonomy to plan a futuristic city along with the theme park. The city never materialized, however; instead, it morphed into the EPCOT theme park.

The push to punish the company comes after Disney announced it would suspend political donations in the state over the new Parental Rights in Education law. Opponents dubbed the law “Don’t Say Gay,” arguing that barring lessons on sexual orientation and gender identity in early grades would marginalize LGBTQ people.

Disney is one of Florida’s biggest private employers: Last year, the company said it had more than 60,000 workers in the state. LGBTQ advocates who work for the company criticized CEO Bob Chapek for what they said was his slow response speaking out against the bill. Some walked off the job in protest.

Governor DeSantis has repeatedly lashed out at Disney and critics of the law, gaining considerable attention in conservative media spheres. He insists the policy is reasonable and says parents, not teachers, should broach subjects of sexual orientation and gender identity with children.

Republican lawmakers appear receptive to punishing Disney, filing proposals that would dissolve the district by June 2023. Governor DeSantis has been a powerful governor, effectively pushing his priorities in the statehouse, and both the GOP Senate president and House speaker support him on the Disney issue.

Democrats were quick to criticize the governor’s move as retribution for the company’s stance on the education bill. Some pointed out that Disney has been a major economic driver in the state.

“What world are we living in right now?” asked Democratic Sen. Audrey Gibson. “It’s the freedom state of Florida. If they disagree with the governor, he brings out the Gatling gun.”

Retired Rollins College political scientist Richard Foglesong, whose book, “Married to the Mouse” recounts the formation of Reedy Creek, said he thought initially that “cooler heads would prevail” in the war of words between Governor DeSantis and Disney.

“I believe I was wrong. I overestimated – or underestimated – Gov. DeSantis,” Dr. Foglesong said. “I see it as a legitimate threat.”

This story was reported by The Associated Press. AP writers Brendan Farrington in Tallahassee and Mike Schneider in Orlando contributed to this report.