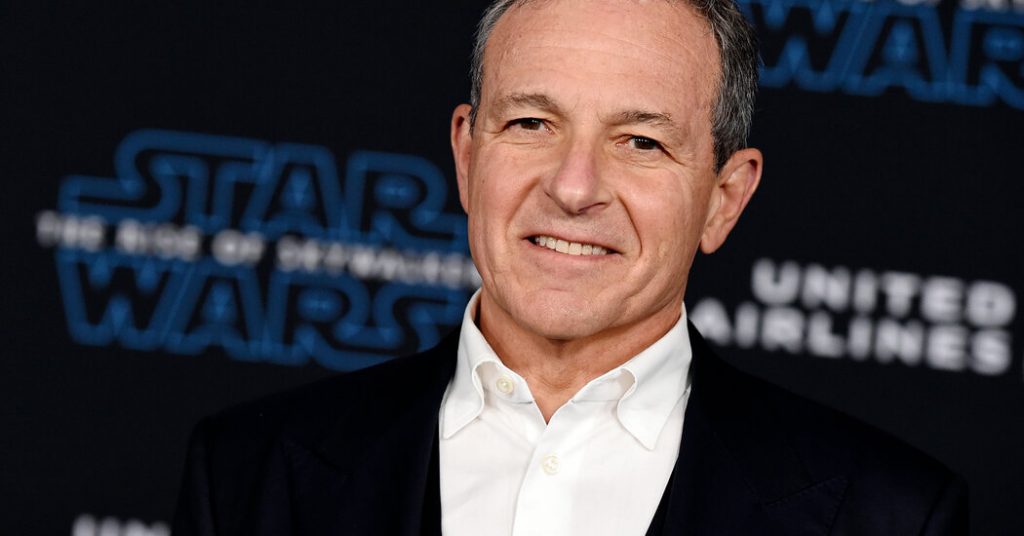 Disney may get its Florida tax magic back

Florida lawmakers are reportedly working to reverse a law stripping Disney of its special tax status in the state, The Financial Times reports, after a feud between Gov. Ron DeSantis and Bob Chapek, the company’s former C.E.O.

If passed, that new legislation would undo much of the fallout from what critics call the “Don’t Say Gay” bill that had made the entertainment giant a target of conservative critics. And it would be a quick victory for Disney’s newly returned chief, Robert A. Iger.

Legislators are expected to largely restore Disney’s special tax benefits. The bill that was signed into law in April ended a 55-year arrangement under which Disney had effectively formed its own government for the 25,000-acre area around its Orlando theme parks, letting the company tax itself to fund services like water, power and firefighting.

Florida policymakers moved to end that deal after Mr. Chapek publicly opposed a state law that barred teaching young public school children about sexual orientation and gender identity. Mr. DeSantis in particular criticized Disney and Mr. Chapek as “woke” and raised money for his re-election campaign against the issue. (The law doesn’t take effect until next year.)

Mr. DeSantis, however, seems unimpressed. “We didn’t drag them in,” the governor said on Fox News this week after Iger’s comments. “They went in on their own and not only opposed the bill, threatened to get it repealed.”

Florida isn’t the only place where Mr. Iger may undo Mr. Chapek’s legacy. He also appears likely to abandon plans to centralize marketing spending decisions at Disney, an idea that infuriated creative executives at the company, The Wall Street Journal reports.

Jobs growth is better than expected. U.S. payroll data today showed that the economy added 263,000 jobs in November, above the 200,000 forecasted. The Fed will weigh the data as it determines whether to slow its increases of interest rates.

Congress moves to avert a rail strike. The Senate approved a bill that would impose a White House-brokered deal between railroad operators and their employees, despite several unions having rejected the pact. That will avoid an economically damaging work stoppage, but some employees complained that lawmakers did not give them a key demand: paid sick leave.

The E.U. approaches a $60-per-barrel price cap on Russian oil. The bloc’s 27 members are nearing an agreement on a limit to impose on Russian cargoes as part of the West’s effort to punish Moscow over the war in Ukraine without cratering global oil supplies. Officials hope to have a formal agreement in place by Monday, though others worry about the talks fraying.

Kanye West is suspended from Twitter. The move was announced by Elon Musk after West, the rapper and designer now known as Ye, tweeted an image of a swastika inside a Star of David. Earlier in the day, he said on a podcast hosted by Alex Jones, “I like Hitler.” Ye’s deal to buy Parler, a social network popular among right-wing audiences, also unraveled.

The Sam Bankman-Fried media blitz isn’t slowing down, with the fallen crypto mogul telling interviewer after interviewer that while he’s made some blunders, he’s no fraudster. But experts say his attempts to flip the narrative — starting with his appearance at the DealBook Summit on Wednesday — are a dubious legal strategy. DealBook spoke to former Justice Department prosecutors about some of his key phrases and about the potential charges and consequences he could face after the interview.

Investigators will be looking for false or misleading statements. Despite the legal jeopardy, the 30-year-old told Andrew he was ignoring “the classic advice” to stay silent. But his words can be used against him in court. S.B.F., as he’s known, is under investigation in multiple jurisdictions, including the U.S., the Bahamas and Turkey, for his role in the collapse of FTX, the cryptocurrency exchange he founded.

“I didn’t knowingly commingle funds.” S.B.F. was referring to accusations that Alameda Research, FTX’s sister firm, was taking FTX customer funds to back very risky bets without their permission. The “knowingly” part is a carefully chosen word. The defense he appears to be making: He made mistakes, but his actions (or absence of actions, like not deploying a risk-management oversight effort) lack intent to defraud.

That defense will only go so far — particularly if witnesses contradict Bankman-Fried’s statements. The Justice Department is working on flipping potential co-defendants who are scrambling to hire crisis advisers now, DealBook hears.

“I was as truthful as I am knowledgeable to be.” This assertion is unlikely to offer S.B.F. much protection if it’s proven he’s taken customer funds without their knowledge or permission to prop up another business, which is a crime. That could add up to wire fraud charges, which involve depriving someone of money or property via a wire communication into or within the U.S., like an email, phone call or text message. S.B.F. and FTX insiders may also face money laundering and conspiracy charges.

Elizabeth Holmes, the founder of the failed blood-testing start-up Theranos, was sentenced last month to more than 11 years in prison for defrauding backers who had invested nearly $1 billion. FTX losses could meet or exceed $10 billion. Its staggering collapse is speeding up calls for tougher laws to police crypto exchanges and protect investors.

BlackRock and its C.E.O., Larry Fink, can’t get out of the cross hairs of the increasingly vocal crusaders against “woke capitalism.” Florida is pulling $2 billion out of the giant fund manager, becoming the biggest state, by population and the amount in its public pension funds, so far to withdraw money over its commitment to environmental, societal and governance, or E.S.G., investing.

BlackRock’s fight with Republican-led states is growing. “If Larry, or his friends on Wall Street want to change the world — run for office,” Jimmy Patronis, Florida’s chief financial officer, said in a statement. “Using our cash, however, to fund BlackRock’s social-engineering projects isn’t something Florida ever signed up for.” BlackRock manages more than $10 billion worth of assets for Florida’s $200 billion pension fund.

West Virginia and Louisiana have already withdrawn money from BlackRock. “It’s not just a couple of states,” Michael Littenberg, a partner at law firm Ropes & Gray, which has been tracking the growing political anti-E.S.G. movement, told DealBook. “Over the past several months, a number of red states have been organized around anti-E.S.G. issues.”

Ron DeSantis, Florida’s Republican governor and a potential 2024 presidential candidate, has railed against E.S.G.-led approaches and ordered the state’s pension fund to eliminate them as an investment consideration. Meanwhile, nearly two dozen Republican state attorneys general called on the S.E.C. to investigate whether BlackRock’s E.S.G. stance violates its fiduciary duty to its clients and shareholders.

Mr. Fink is fighting back. “Stakeholder capitalism is not woke — it’s not political, it’s capitalism,” he said at the DealBook Summit, adding that E.S.G. considerations will provide better long-term returns for investors. “I am spending a lot more time in Washington and states trying to correct the narrative because in most cases, the narrative is not based on facts.”

“We’re going to continue to create manufacturing jobs, but not at the expense of Europe.”

Elon Musk may be getting widespread criticism for how he’s running Twitter, but that view doesn’t seem to be shared by his fellow C.E.O.s: Reed Hastings of Netflix called Musk “the most brave and creative person on the planet” at the DealBook Summit; James Gorman of Morgan Stanley yesterday compared him favorably with Steve Jobs and Bill Gates; and the advertising guru Martin Sorrell said that “it doesn’t pay to bet against him.”

What’s behind that adulation? And how long will it last, given new controversies like the suspension of West from Twitter?

Perhaps it’s a mix of admiration and envy. Mr. Gorman pointed to what he said was Musk’s ability to innovate across a variety of industries, including cars and space rockets. “Who would not want to do business with a person who has that kind of capability?” he asked. (Note: Mr. Gorman already does business with Musk — Morgan Stanley advised him on buying Twitter and led a $13 billion loan for the deal.)

Some corporate leaders also seem to respect Mr. Musk’s hardheadedness. At Twitter, he has pushed hard on matters like return-to-office, hours worked and looser content moderation, in spite of widespread resignations by employees and outside criticism. “His style is different,” Mr. Hastings said. “I’m trying to be steady and respectable. He doesn’t care.”

Mr. Musk has also been willing to brawl with corporate rivals: He publicly accused Apple of threatening to kick Twitter off its App Store, and tried to foment renewed regulatory scrutiny of the iPhone maker. (That public spat appeared quickly resolved after Mr. Musk visited Tim Cook at Apple’s headquarters and called the episode a “misunderstanding.”)

Is there a limit to their fandom? Mr. Musk has promised a “thermonuclear name and shame” campaign against companies that pulled their ads from Twitter — but that doesn’t appear to have brought advertisers back.

Meanwhile, Mr. Musk’s quickly changing policies may not invite renewed confidence. He laid off about half of Twitter’s staff, then asked some workers to return. And he’s had to retool Twitter’s subscriber-verification process after a wave of impersonations.

Best of the rest

We’d like your feedback! Please email thoughts and suggestions to [email protected].

The post Has Bob Iger Brokered a Truce With Florida? appeared first on New York Times.