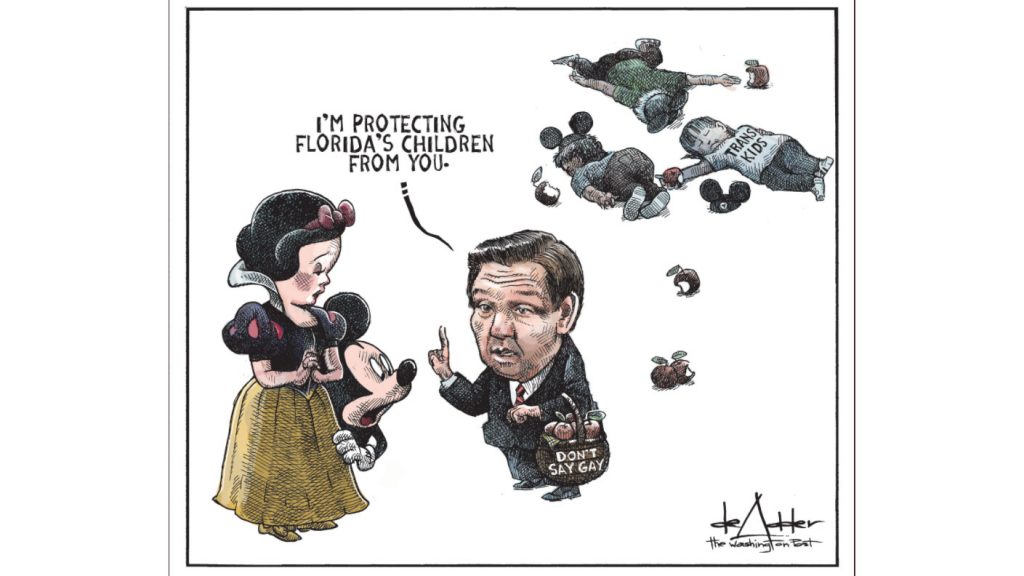 De Adder shared an image of the cartoon in a Friday tweet that included a link to the drawing headlined, “Magic Mirror on the wall, who is the Trumpiest one of all?”

A new cartoon by liberal Washington Post cartoonist Michael de Adder shows bodies of sleeping children, with one appearing to be based on an infamous image of the drowned body of Syrian refugee Alan Kurdi.
(Screenshot/Twitter)

The image was intended to be a dig at DeSantis and what liberals have misleadingly referred to as the “Don’t Say Gay” bill, which was recently signed into law by the Florida governor and focuses on parental rights in education, including a ban on school employees or third parties from giving classroom instruction on “sexual orientation” or “gender identity” in kindergarten through third grade.

The cartoon depicted DeSantis telling Disney characters Mickey Mouse and Snow White that he was protecting Florida’s children from them as he can be seen carrying a basket of apples labeled, “Don’t Say Gay.” A trail of children who’ve eaten the apples appear to be lying either dead or asleep behind DeSantis, with one wearing a shirt reading, “Trans Kids,” in an apparent reference to the apple Snow White ate causing her to fall into a deep sleep.

One of the bodies looks to be in the same position as Kurdi when he was found lifeless and washed up on the shore of a Turkish beach in 2016 amid the height of the Syrian refugee crisis after the boat he was traveling in capsized.

The reference to Disney in the cartoon follows the left-leaning company’s announced opposition to the bill last month.

Critics took to social media to blast de Adder for using the image of an actual dead child for political reasons.

“I hope Alan Kurdi’s family sues you into the ground [Washington Post]. In your attempt to demonize your enemy you use the dead child of a poor refugee family. Shame on you,” wrote activist Obianuju Ekeocha, while journalist Mairead Elordi simply wrote, “Ghoulish.”

“Where’s the part where you used a real dead child as your reference, Michael?” asked journalist Noam Blum.

This isn’t the first time de Adder, who is Canadian, has faced criticism over his controversial drawings. In January, he described Canadian truckers protesting strict coronavirus measures in Canada as supporters of fascism, and was fired in 2019 from a Canadian publisher over a drawing depicting then-President Donald Trump attempting to play golf around the bodies of dead migrants at the U.S. Southern border.