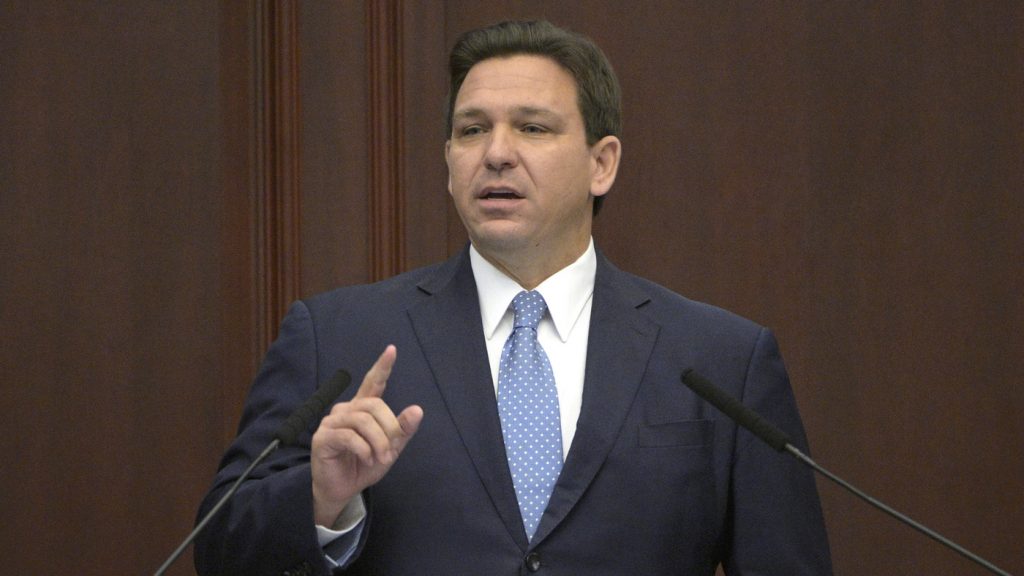 After months of back and forth, lawmakers in Florida have passed Gov. Ron DeSantis’ controversial congressional district voting map — and have pushed forward his last-minute plan to scrap Disney World’s special regulatory status in the state.

It’s a clear display of the Republican governor’s power, just about six months before he’s on the ballot for reelection. But Democratic lawmakers resisted his congressional map until the final moments, staging a sit-in on the floor before the final vote.

“When Black votes are under attack, what do we do? Stand up. Fight back,” members of the Florida Legislative Black Caucus shouted as Republican lawmakers filed out and Democrats began their protest. “We will occupy this floor. We will not be denied.”

The map will give Republicans a 20-8 seat advantage in a state where registered Democratic and Republican voters are nearly equal in number. It will also eliminate two congressional districts held by African American Democrats: Rep. Al Lawson of Tallahassee and Rep. Val Demings of Orlando.

State GOP lawmakers passed the governor’s map about two days after taking it up. No changes to the drawing were made.

Democrats blasted the map as unconstitutional and admonished GOP lawmakers for acquiescing to the governor on that and on the governor’s move to eliminate a decades-old governing district set up for Disney World and nearby properties.

As the special session for redistricting kicked off on Tuesday, DeSantis amended the agenda to include two last-minute bills involving Disney.

The move came after weeks of battling between Republican leaders and Disney over a new law that restricts instruction about gender identity and sexual orientation in schools. Formally it’s called the Parental Rights in Education law, but critics have dubbed it the “don’t say gay” law.

One of the new bills passed this week dissolves Disney’s special independent district status. That’s a 1967 provision that allows the company to collect taxes and issue bonds. It also exempts the park from nearly all state regulations. The other bill eliminates a social media carveout for theme parks following a 2021 law aimed at punishing certain platforms that ban political candidates.

In March, DeSantis slammed Disney for coming out against the Parental Rights in Education law. “I think that crossed the line. This state is governed by the interests of the people of the state of Florida. It is not based on the demands of California corporate executives,” he said.

Senate President Wilton Simpson, also a Republican, said the measures were not meant to penalize Disney. “We’re not looking for retaliation, we’re looking and saying this is an organization amongst others that have many powers that we do not believe they should have in 2022,” he said.

But for some Republican committee members, the legislation was clearly about Disney.

“Shamefully, Disney betrayed us,” Republican Rep. Jackie Toledo said, adding that Disney had been “perverted by a woke mob of liberal extremists.”

Amid the shouts from House Democrats protesting congressional maps, Republicans pushed through the two bills aimed at Disney without debate.

Democratic state Rep. Fentrice Diskrell says the governor is using the legislature to take revenge on one company for taking a stand.

“Disney did the right thing by speaking out in opposition to the horrible bill that is suppressing the stories of the LGBTQ community and their families,” she said.

State Rep. Anna Eskamani, a Democrat from Orlando, said Republican House leaders steamrolled the bills forward after halting debate as Democratic lawmakers continued protesting the governor’s map. “That is undemocratic,” Eskamani said. “That is the tell-tale sign of a party drunk on power, and it’s how democracy dies.”

“It was never about good government. It was all about just being petty, being performative and trying to bully opposition into submission,” Eskamani said.

But it was the new congressional redistricting maps that received the most protest this week.

Voting rights groups, voters and members of the Florida Black Legislative Caucus rallied outside the state capitol on Tuesday before lawmakers convened to pass the governor’s map. Constituents who live in U.S. Reps. Lawson’s and Demings’ districts traveled to make their voices heard. “It’s unfair, unconstitutional, an attack on Black representation and injustice to Black voters,” said Northside Coalition President Ben Frazier, who came in a motorcade from Jacksonville to protest the map. Frazier describes the map as “a sham and a scam.”

The protest on the floor was decried as an “insurrection” by GOP lawmakers. Republican House Speaker Chris Sprowls declined to speak with reporters, but said in a statement that lawmakers who protested “decided to hijack the legislative process.”

State Rep. Driskell explained that members of the minority party felt they had no choice but to protest. They were given little time to review and discuss the governor’s map with colleagues during the special lawmaking session, which lasted a little over 48 hours.

“We did everything we could to approach it from a policy point and from the actual process and the rules. What happens when people don’t feel heard? Civil disobedience is a fundamental principle in this country.”