DeSantis Lists Goals for Florida Special Session: Fines of Up to $50,000 for Forced Vaccine Policies 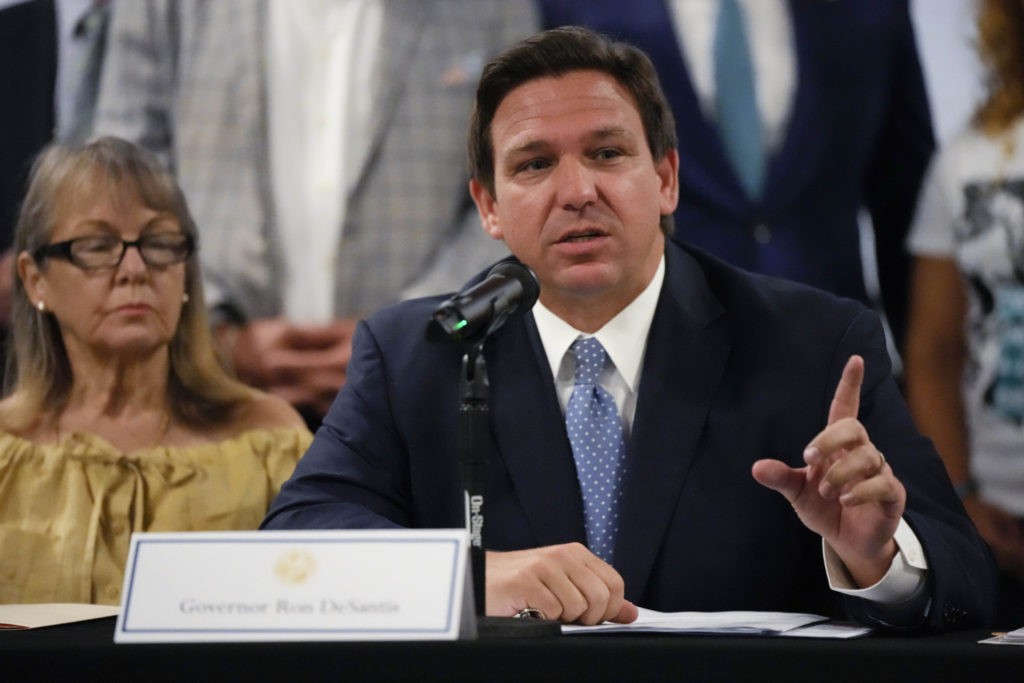 Speaking from Zephyrhills, Florida, DeSantis previewed some of the key goals ahead of the start of the legislature’s special session, which begins November 15.

“Look, nobody — no cop, no firefighter, no nurse, nobody, should be losing their jobs because of these jabs. We’ve got to stand up for people, protect their jobs, and protect their livelihoods,” DeSantis said days after the U.S. Department of Labor’s Occupational Safety and Public Health (OSHA) released its emergency temporary standard (ETS), forcing employers with over 100 employees to either mandate the vaccine or implement rigorous testing requirements.

“Even though the Biden administration, always said there will never be mandates — and even they acknowledged the federal government doesn’t have the power to mandate it —  Fauci said it would never be mandated, and now all of the sudden, they say there’s grave danger so it takes them two months to write a 500-page rule that they’re trying to shove down the throats of the American people,” DeSantis said, calling it “wrong.”

“It’s wrong to treat people like that. It’s wrong to put people out of work, it’s wrong to try to micromanage businesses like that, and it’s wrong to potentially deprive key industries of people that we need — trucking, nurses, all this other stuff and probably most importantly, what they’re doing is unconstitutional,” he said, explaining that this is not just about the Biden mandate itself.

Major corporations, he explained, are “basically enacting” such policies. At the end of the day, all vaccine mandates “ignore science because they don’t recognize immunity conferred through prior infection,” he added, emphasizing that officials have a responsibility to protect Americans from the mandates.

The special session will focus protecting Americans’ jobs from the vaccine mandates, making the previous law passed addressing this issue, SB 2006, even clearer.

According to a fact sheet from the governor’s office, employers that have vaccine policies in place “afford” certain exceptions, including health or religious concerns. Others include exceptions for pregnant women, and those who have already recovered from the Chinese coronavirus. Additionally, employers “must provide ALL EMPLOYEES the option to choose periodic COVID-10 testing or PPE as an alternative to a vaccine requirement (at no cost to employees)” — a drastically different stance than OSHA’s rule, which does not require employers to cover the cost of weekly tests.

Per the fact sheet, employers who violate the protections would face fines of up to $50,000 per violation. Smaller businesses with 99 employees or less will face $10,000 fines per employee violation.

Additionally, DeSantis said the special session will also focus on strengthening the Parents’ Bill of rights, making it clear that schools cannot force kids to wear masks. If they do, the parents will have the right to sue school districts and recover cost and attorney’s fees for having to do it, according to the governor.

“I guarantee you, with having that kind of teeth in the Parents’ Bill of Rights, you’re going to have everyone get in line,” he said, predicting the work done in the special session will “save the day for a lot of workers.”

“My sense is no Democrat will help any of these workers. Biden said cops should get fired, nurses should get fired. That’s his position. I’d imagine the legislature, they’re all going to support forced firing of these people over the jabs. That’s unfortunate,” DeSantis said. “Hopefully I’m wrong.”

Overall, DeSantis said the legislature will provide “probably the strongest protections for both private and public sector employees anywhere in the country.”