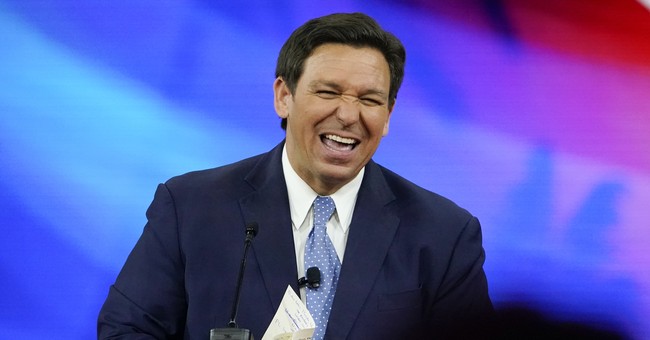 Ron DeSantis fired back on Sunday at Gavin Newsom’s desperate campaign targeting Florida. The Democrat governor recently announced an ad buy in the Sunshine State, proclaiming that California is the actual beacon of freedom in the country.

Keep in mind that Newsom runs the most over-regulated, overbearing, overtaxed state in the union, to the point where you can’t even get a plastic straw. Never mind the soul-crushing COVID lockdowns that lasted years in California.

Newsom revealed his ad Sunday morning, and it’s as pathetic and out-of-touch as you’d imagine. Here’s an excerpt.

“It’s Independence Day. So let’s talk about what’s going on in America…

“Freedom is under attack in your state. I urge all of you living in Florida to join the fight — or join us in California, where we still believe in freedom: freedom of speech, freedom to choose, freedom from hate, and the freedom to love. Don’t let them take your freedom.”

You can only laugh. Newsom actually believes that leftwing platitudes about “freedom to choose” and “freedom to love” will resonate in Florida, where the economy is booming and people enjoy individual freedom on a level only rivaled by other red states. Imagine thinking people would want to leave that behind in order to move to a crime-ridden hellhole with exploding homelessness, high taxes, and a government that won’t even let you make basic decisions without interference.

Here it is, in all its glory:

We’re about to celebrate Independence Day — but Freedom is under attack by Republican leaders in states like Florida.

It’s time to stand up. Don’t let them take your freedom. pic.twitter.com/cFI5UzgZzX

But California allows drag shows in schools, so I guess that’s supposed to drive people out of Florida or something. Again, it’s just laughable, and DeSantis spokesman Dave Abrams fired back with the obvious retort.

“Gavin Newsom might as well light a pile of cash on fire,” Dave Abrams, a spokesperson for DeSantis’s re-election campaign told The Daily Wire. “Pass the popcorn for his desperate attempt to win back the California refugees who fled the hellhole he created in his state to come to Florida.

“The people of Florida pay no mind to the pathetic smear campaigns from the Democrats and their allies in the corporate media,” Abrams added. “We’re too busy enjoying the freedom Governor Ron DeSantis has created in the Sunshine State.”

The mention of California refugees is the key. The reality is that people from Newsom’s state have been fleeing to Florida in droves over the last several years. Those people aren’t going to be swayed by a dude with too much hair gel virtue signaling about abortion. They are too busy enjoying the success and freedom delivered to them in Florida that they were sorely lacking in California.

To keep it simple, the numbers don’t lie. One person is clearly winning here, and it’s not Gavin Newsom. If anything, the fact that he’s now running ads in a state thousands of miles away shows just how far California has fallen. DeSantis doesn’t even have to respond in kind because his state is booming.

Newsom clearly wants to run for president in 2024, and this move is part of that. I suspect things aren’t going to work out that well for him. Does anyone really think Democrats are going to throw Kamala Harris overboard? The first black vice president? I mean, come on. That’s not to say Harris isn’t a terrible presidential candidate, but there’s no way the far-left allows her to be degraded by a slick-talking white dude like Newsom.

Still, I’m going to have a lot of fun watching the battle unfold. I suspect Ron DeSantis will as well.

(EDITOR’S NOTE: This piece was edited post-publication to include the video of the Newsom ad.)