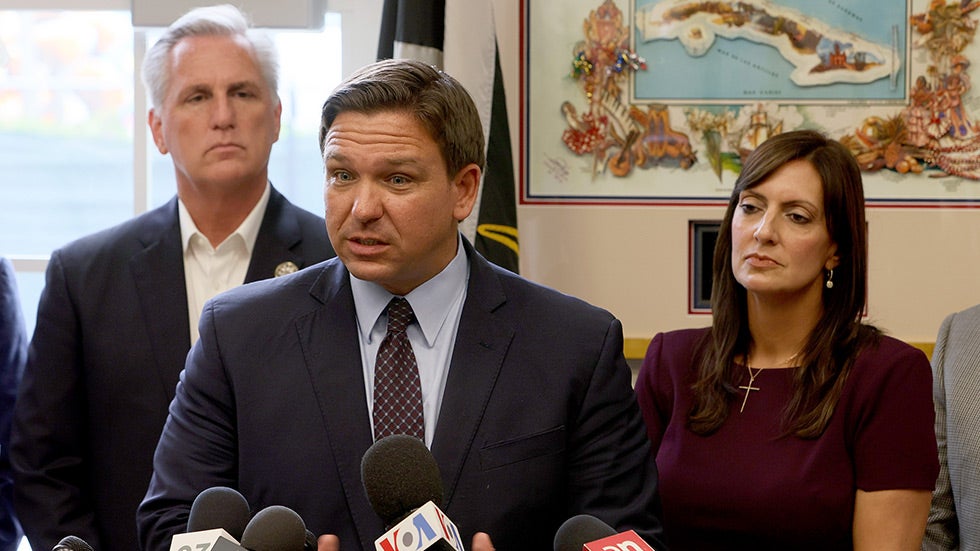 The efforts to defy DeSantis on his approach to the COVID-19 pandemic come as Florida scrambles to contain a resurgence in the virus that has transformed the Sunshine State into the new epicenter of the coronavirus outbreak in the United States.

As of Monday, Florida is averaging more than 20,000 new infections each day, according to the Centers for Disease Control and Prevention’s Covid Data Tracker. The Florida Hospital Association announced on Tuesday that some 14,787 people are hospitalized and nearly 90 percent of the state’s intensive care unit beds are filled. Hospitalizations are now up 145 percent from Florida’s previous peak in July 2020, according to the group.

“The governor — what he’s done, which I think is really almost sinister, is that he has taken this obvious health care challenge and decided to exploit it,” Miami Beach Mayor Dan Gelber, a Democrat, said in an interview on NPR’s “All Things Considered” on Tuesday.

DeSantis and the Republican-controlled state legislature have sought to wrest control of the pandemic efforts from county and municipal officials in recent months, relying on a flurry of legislation and executive orders intended to curb local governments’ authority to impose coronavirus-related restrictions and mandates.

In May, DeSantis signed legislation giving him sweeping authority to invalidate local pandemic emergency measures, including mask mandates and school shutdowns. That legislation also made permanent an executive order DeSantis signed earlier this year that banned businesses from requiring patrons to show proof of vaccinations.

But it was an executive order signed by DeSantis in late July banning schools from requiring face masks that touched off the recent furor from school districts.

On Tuesday, the Broward County School Board voted to maintain a mask mandate approved just days before the governor’s executive order, becoming the third school district in Florida to flout DeSantis’s order. School leaders in Leon County, which includes Tallahassee, and Alachua County, where Gainesville is located, have taken similar steps.

Students in those school districts are required to provide a doctor’s note to opt out of the masking requirements.

The efforts to defy the executive order have drawn the ire of DeSantis, who has argued that the ban on school mask mandates is intended to protect parents’ right to choose whether their children should wear masks. His office threatened this week to withhold the salaries of superintendents and school board members who intentionally ignore the order.

“Ultimately — education funding is for the students,” said Christina Pushaw, a spokesperson for DeSantis. “The kids didn’t make the decision to encroach upon parents’ rights. So any financial penalties for breaking the rule would be targeted to those officials who made that decision.”

That was met with defiance from school officials, who said they were willing to proceed with the mandates despite the DeSantis administration’s threats. After the Broward County School Board voted on Tuesday to maintain its mandate, board member Nora Rupert challenged the governor: “Lose our salaries? Bring it.”

The Biden administration has also thrown its support behind the efforts to defy DeSantis’s executive order, telling reporters on Tuesday that it was examining how it could counter the potential pay cuts.

Jen PsakiOvernight Defense: The situation in Afghanistan is deteriorating — fast Trump Jr. slams White House for using social media influencer to push vaccination Senate confirms Biden’s first ambassador MORE said that the administration is looking into whether it can use unspent funds from the American Rescue Plan, the massive COVID-19 relief bill approved in March, to pay school officials who have their salaries docked.

“We’re continuing to look into what our options are to help protect and help support these teachers and administrators who are taking steps to protect the people in their communities,” Psaki said.

DeSantis responded to the White House’s suggestion on Tuesday, arguing that the federal government has no right to involve itself in parents’ decision to have their children wear masks or not.

There are more battles on the horizon. A circuit judge in Leon County has scheduled a Friday hearing in a lawsuit brought by a dozen parents from several Florida counties challenging DeSantis’s executive order on masking in schools.

It’s not yet clear what effect the COVID-19 surge in Florida could have on DeSantis’s political ambitions.

The Florida governor, who’s up for reelection next year, rose to prominence among conservatives last year for his laissez-faire — and at times defiant — approach to the coronavirus pandemic and quickly surged toward the top of the list of potential 2024 Republican presidential candidates.

Another survey from St. Pete Polls, however, showed a less certain outlook for DeSantis. Forty-four percent of respondents in that poll said they approve of his job in the governor’s mansion compared to 49 percent who did not. The poll also showed DeSantis narrowly trailing Crist, while he led Fried by 3.3 percentage points.

The same survey from St. Pete Polls found a majority of likely Florida voters — 62 percent — in favor of a mask requirement for children in schools.

Still, DeSantis, who has cast himself as a conservative bulwark against a Democratic-controlled Washington, has continued to rake in massive sums of money to his political committee. In July alone, the Florida governor raised more than $4 million, far outpacing both Crist and Fried.

One Florida Republican strategist said that DeSantis remains the favorite to win reelection next year, noting the goodwill he carries among supporters of former President Trump

The strategist also noted that DeSantis’s instincts on how to best handle the coronavirus pandemic have played out well for him in the past; as the governor eschewed some of the strictest COVID-19 restrictions last year, the state’s caseloads and death rate remained relatively low compared to other large states.

But, the strategist added, “there’s still a chance that maybe he doesn’t come out on top this time.”