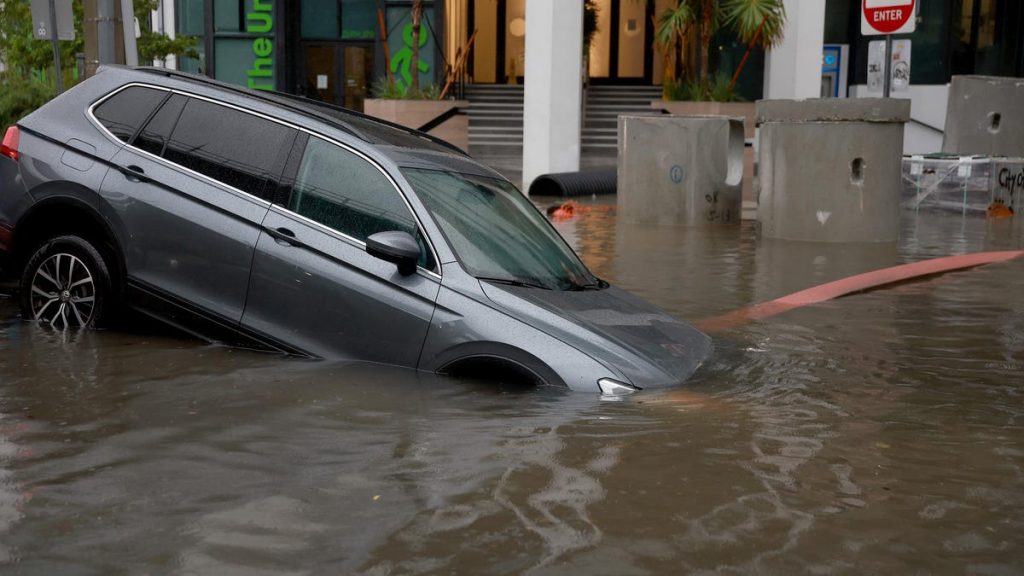 Numerous roadways across south Florida essentially turned into waterways Saturday morning as a tropical system—just three days into what’s forecast to be a punishing hurricane season—pummeled the area, dropping nearly a foot of rain with more possible in the coming hours.

Up to 11 inches of rain have fallen in parts of Miami-Dade County since the system moved into the area on Friday, according to the National Weather Service, and five more inches could still fall.

The rain has caused streets to flood throughout the area, leading to stranded cars, including in downtown Miami.

Water also appeared to be approaching homes Saturday morning in the Little Havana neighborhood west of downtown, according to the Miami Herald.

Urban areas of south Florida, including Miami, Fort Lauderdale and Palm Beach were under a flash flood warning until noon.

More than 400. That’s how many flights have been delayed or canceled from south Florida airports since Friday, according to the South Florida Sun-Sentinel.

The rain is associated with Potential Tropical Cyclone One, which is moving across south Florida with maximum sustained winds of 40 mph, according to the National Hurricane Center. Forecasters started issuing advisories on the system Thursday, anticipating it would organize into Tropical Storm Alex before making landfall. It is expected to move into the Atlantic Ocean by Saturday evening, and forecasters predict it will become a tropical storm by Sunday morning as it swiftly moves toward Bermuda before going out to open sea.

Forecasts suggest 2022 will be an extremely active hurricane season, much like the 2020 and 2021 seasons. In their annual preseason outlook, meteorologists with Colorado State University predicted 19 named storms for this season—the most they’ve ever called for since pioneering seasonal outlooks in 1984.

Downtown Miami regularly experiences flooding due to high tides, though that is not contributing to Saturday’s flood. The tidal flooding is attributed to sea level rise as a result of climate change, which is expected to worsen in the future.

Hurricane Researchers Issue Their Most Active Preseason Forecast Ever (Forbes)

Live updates: Here’s what’s going on with the tropical weather from Miami to the Keys (Miami Herald)