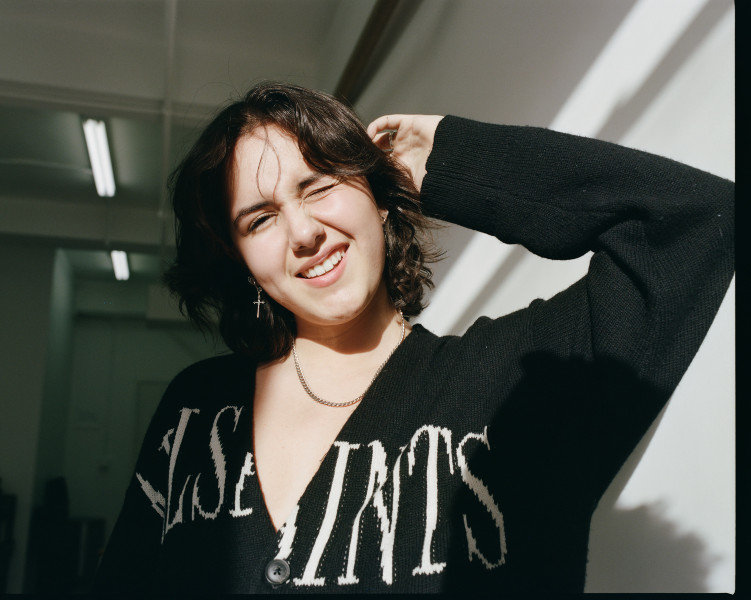 Originally from Florida, now based in NYC, Deadbeat Girl’s sound merges elements of ‘90s grunge rock and ‘000s pop-rock with tinctures of other genres, often conjuring up suggestions of Billie Eilish and Phoebe Bridgers.

Speaking about “She Loves Me, Deadbeat Girl says, “This song is different from my previous single and other songs that I plan to put out. I definitely stick to my own personal sound in all of my songs, but I like to decorate them all differently, exploring different genres.”

At the present juncture, Deadbeat Girl is working on her debut EP, while also performing live. She played with girl in red not long ago.

She started learning guitar, piano, and bass around 6 years ago and just started making her own music in 2020 before being accepted into NYU’s music program at 17. She writes, plays, and produces all of her own material, as well as directing her own photo and video shoots.

Simultaneously wistful and alluring, there’s a tonal aspect to her vocals, haunting and cogent, that lures listeners into another realm.

Guitar Girl Magazine caught up with Deadbeat Girl to discover more about the inspiration for “She Loves Me” and her songwriting process.

What three things can’t you live without?

What inspired your new single/music video, “She Loves Me?”

The single was inspired by a relationship situation that I was in where I was getting treated really unfairly, but I was still very much in love. The music video is inspired by small indie artists’ homemade music videos on YouTube, most notably girl in red and Clairo’s older music videos.

Who directed the video and where was it shot?

I directed the music video, and it was shot at Washington Square Park in NYC.

Usually, I come up with a little guitar motif or chord progression first. I figure out a vocal melody and then I fill in the lyrics.

What do you hope your fans/listeners take away with them when they listen to your music?

I want to feel relatable and for my music to be a place where my listeners can find a sense of comfort. There is no better feeling than finding that one song that perfectly describes what you are going through and being able to just shout out those lyrics. That is the best form of therapy for me, at least.

How did you get started in music? What’s the backstory there?

My parents have always been obsessed with music, so I grew up with music all around the house. When I was about 14, I begged my parents for a ukulele while on a family trip. Once I got it, I became obsessed. After I mastered that, I moved on to learn guitar and a bunch of other instruments. A few years later, during quarantine, when I was about 17, I asked for a little home studio for my birthday and got into producing. With that came making my own songs, and when I got into NYU’s music program, I started taking it more seriously.

Where are you from?

I am from South Florida.

Did your hometown impact your sound?

A lot of the experiences I write about happened in my hometown, so my hometown definitely inspired a lot of my songwriting habits. When it comes to my overall sound, I am hugely inspired by the music my parents raised me on in my hometown.

What kind of guitar do you play?

I play both acoustic and electric but mostly acoustic. I have a Taylor GS mini acoustic guitar that I record and write with. Literally the perfect guitar.

Are there any recording techniques you like to use in the studio?

A technique that I live by is song references. Sometimes it’s hard to articulate in words what feeling or sound I want to create, so I always bring references to the studio. It also helps a lot in mixing to have a general idea of where the levels should be in a certain genre.

Which artists in your opinion are killing it right now?

As of late, I have been obsessed with small artists on TikTok. I came across two artists, Hemlocke Springs, and EKKSTACY, and their music is something so different and so, so cool. I also think that girl in red is absolutely killing it. Watching her go from a bedroom indie-pop artist to a highly respected touring rockstar is sick.

What’s your definition of success?

My definition of success is being able to spend the majority of your time doing what you love.

What can your fans expect over the next six months? New material? Live gigs?

So much stuff! I have a whole vault of music that I plan on rolling out in the next few months. I have music video ideas to go with the music, and I’m currently in the process of planning live gigs!