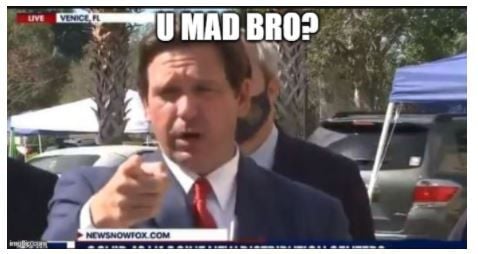 We’re seeing quite the split among “conservatives” regarding the Florida legislature voting to repeal Walt Disney World’s status as a self-governing entity. Charles C. W. Cooke wrote that there was no reason for Gov. Ron DeSantis to “salt the earth” after winning a victory with the passage of the Parental Rights in Education bill. Dana Loesch wrote a thread on how she’s sick of the Mitt Romneys on the Right trying to shame Florida conservatives. Jesse Kelly tweeted about how he’s done with the Right’s loser mentality. “Eventually, you prefer losing,” he wrote.

David French has weighed in, and he’s troubled by the Right’s “about-face” on free speech, citing how it was also wrong to ban Chick-fil-A from the San Antonio International Airport due to its “legacy of anti-LGBTQ behavior.”

I’d say that the right’s about-face on free speech is surprising, but nothing shocks me anymore. I guess it’s still wrong for San Antonio to target Chick-fil-A? But it’s right for DeSantis to target Disney? Re-upping, because it’s true: https://t.co/fxXU7L6HO4

Um, those aren’t the same at all.

It’s pretty incredible, David, that you care so little for your own reputation & credentials that you’re willing to piss all over them by habitually lying about what free speech does & does not mean, thereby doing incalculable harm to people’s value of it.

Is the Chick fil A in San Antonio the size of a small city that gets to govern itself and receive state funds? We’ll wait.

I, like many others here, can’t understand how you can even compare the two. Completely different situations.

Is there a difference bt revoking a special privilege (Disney) and outright denying access (chik fil a)?

I really don’t get why David French doesn’t understand the difference between revoking special privileges and not allowing to exist. It’s baffling.

Chick-Fil-A didn’t do anything but mind it’s own business… Literally.

Disney was not outlawed, it had a special privilege revoked. Got it?

Total straw-man argument David. 1. Disney was lying about the contents of the bill. 2. They are being revoked of a special privilege no other business has.

You can believe it’s a poor policy decision to revoke the privilege. But these are two completely different circumstances.

Chick-fil-A wasn’t getting special treatment that no other company in the city of San Antonio was getting. That’s the difference. This special status should have been stripped years ago. And were it not the current fight you’d agree.

Did Chick-fil-A get involved in San Antonio politics and I missed it?

How much autonomy and how many special deals do Chik-Fil-A restaurants have?

The conservative case for not taxing groomers.

As a limited government guy, I’m sympathetic to that view, but look around you. The left has captured all the institutions that shape our culture and youth. Do you want to fight that, which will be messy, or do you want to be the most principled conservative in the gulag?