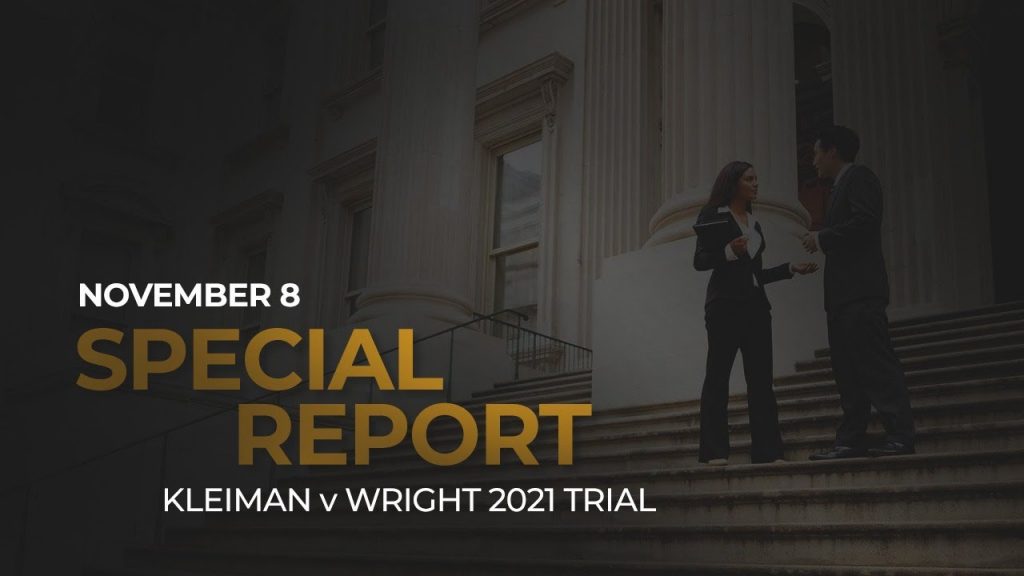 Plaintiffs of Kleiman v Wright called Dr. Craig Wright to the stand on Monday, Day 6 of the trial. In anticipation of the historic event, journalists, lawyers, interns, and blockchain enthusiasts from every corner of the United States filled the courtroom. There were so many people in attendance that the courtroom reached max capacity and the bailiffs were forced to send people to the overflow room—all because onlookers were interested in seeing Dr. Wright on the stand.

But before Dr. Wright took the stand, the day began with a deposition-by-written-question of Ramona Watts, Dr. Wright’s wife. Watts has held numerous roles at several of the companies Dr. Wright played a crucial role in. Lawyers for the plaintiffs inquired with Watts about several business documents that a director of a company—a role Romana has held—could possibly have knowledge about since many documents require the director’s signature.

In addition, the plaintiffs questioned Watts about several newly introduced pieces of evidence that imply secrecy and the transfer of assets from Dave Kleiman to Dr. Wright.

One piece of email evidence provided during Watts’ deposition was an email from Scottish journalist Andrew O’Hagan to Watts that read:

“The Dave stuff is practically non-existent on paper. I understand you wiped a lot…but a final trawl through your digital universe might give me something that connects the two of you (Dave and Craig) unarguably to the invention.”

At the end of the day, Watts’ testimony did not reveal anything the court did not already know.

“My testimony is that my husband has never told me that he mined Bitcoin with Dave Kleiman,” said Watts before the plaintiff began showing their video deposition of O’Hagan.

During O’Hagan’s deposition, the plaintiffs repeatedly quoted sections of O’Hagan’s long-form article “The Satoshi Affairs,” which was written after O’Hagan spent time with Dr. Craig Wright in an attempt to discover whether or not Dr. Wright really is the founder of Bitcoin, Satoshi Nakomoto.

O’Hagan confirmed that every excerpt the plaintiffs provided in court as evidence was “an accurate expression of his journalistic materials.” A few quotes from the evidence that really stood out were:

“You edited my paper and now I need to have you aid me build this idea,” from an email correspondence between Dr. Wright and Dave Kleiman.

“I have a few potential clients in gaming and banking,” Dr. Wright wrote to Kleiman. “I figure I can work 10 to 15 hours a week and pretend to have a consultancy and use this to build and buy the machines I need. If I automate the code and monitoring, I can double the productivity and still offer more than others are doing … The racks are in place in Bagnoo and Lisarow. I figure we can have 100 cores a month setup and get to around 500.’”

And a quote from a conversation between Dr. Wright and O’Hagan that reads: “I was the main part of it. Other people helped. At the end of the day, none of this would have happened without Dave Kleiman, without Hal Finney, and without those who took over—like Gavin and Mike.”

The afternoon session began with Dr. Wright, the defendant in this civil lawsuit, called to the stand. Although many people highly anticipated Dr. Wright taking the stand and expected sparks to fly, not much happened.

The plaintiffs produced several new pieces of evidence in which Dr. Wright was corresponding with others, as well as business documents from the several entities that Dr. Wright played a crucial role in. They did this in an attempt to show that these correspondences could indicate that Dr. Wright and Dave Kleiman had a partnership since Dr. Wright uses the word partner when speaking about Dave in several of his messages—although he never mentions Bitcoin in those correspondences.

The plaintiffs also introduced several pieces of evidence that mention both Dave Kleiman, mining, or the United States within the same correspondence.

“This is an idea that I had developed with my business partner David Kleiman for a period of over a decade,” said Dr. Wright in an email correspondence to a detective in New South Wales.

Dr. Wright refers to Dave Kleiman as his “partner” in the correspondences, although the nature of their partnership wasn’t made clear.

“In order to fund my works, my partner Dave Kleiman and I sold code that was used in gaming in countries like Costa Rica,” said another piece of evidence.

“The main thing here is Dave mined all of this outside Australia. Even if we had managed to screw this up and somehow lose control of the company…the bitcoin rights are overseas,” read another.

And “I was not the person doing the mining, Dave was,” said Dr. Wright in another correspondence.

The plaintiff’s lawyer Vel Freedman also introduced corporate documents as evidence that could indicate that Dave Kleiman’s assets were illicitly transferred to Dr. Wright at a point in time. In one of the documents, there is evidence of 573,500 BTC being transferred from Dave to Dr. Wright.

Freedman inquired into how this transfer was able to take place and produced evidence that showed that Dr. Wright was in control of the company that transferred the assets to himself.

Although many people were expecting sparks to fly the moment that Dr. Wright took the stand, it has been a slow burn. The plaintiffs were only able to gain ground today via the evidence that they introduced. This evidence implies, but does not prove, that a partnership existed and that assets were illicitly transferred from Dave Kleiman to Dr. Wright.

But on the argument front, nothing has really stuck; the answers that both Ramona Watts and Craig Wright have given plaintiffs in their deposition and examination respectively, has not advanced the plaintiffs argument, and all Andrew O’Hagan did was confirm evidence that has been publicly available online for nearly 6 years now.

What’s beginning to play a bigger part of Dr. Wright’s argument is his diagnosis of Asperger’s syndrome. Watts even says in her testimony that since he has Asperger’s, Dr. Wright often has trouble presenting himself properly and that he may perceive the world as well as words and what they are being used in reference to differently than others.

Some of the clarifications and answers Dr. Wright has provided in his testimony support Watts’ statement and his Asperger’s diagnosis, especially where Dr. Wright was clearly perceiving the world differently than those around him while being unaware that others were not on the same page as him.

Dr. Wright’s first day on the stand was simply setting the stage for Tuesday—Day 7 of the trial—when he is expected to be on the stand all day. Maybe then we will see the sparks fly.

CoinGeek will feature Kurt Wuckert Jr. in daily recap coverage which will be livestreamed on a daily basis at 6:30 p.m. EST on our YouTube Channel.

Check out all of the CoinGeek special reports on the Kleiman v Wright YouTube playlist.