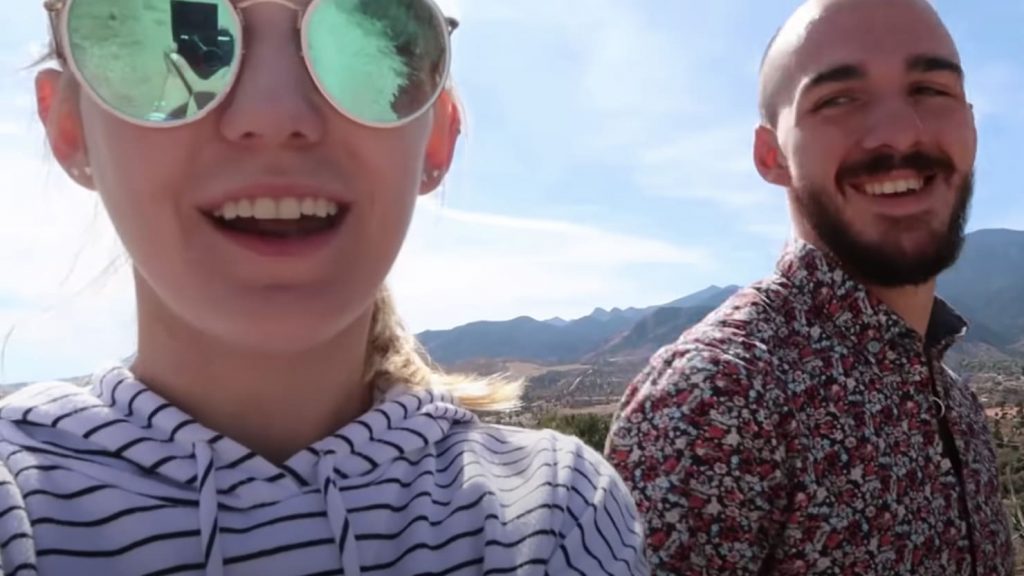 Police officers in Moah, Utah, responding to reports of a dispute between doomed “van-life” couple Gabby Petito and Brian Laundrie, who is now a person of interest in her homicide, were told by dispatch that Laundrie had reportedly hit Petito during the Aug. 12 argument, newly released audio reveals.

“RP [reporting party] states a male hit a female,” the police dispatcher says over the radio. “Domestic. He got into a white Ford Transit van. Has a black ladder on the back. Florida plate… The female who got hit, they both—the male and the female—both got into the van and headed north.”

The tape, obtained by Fox 13 in Salt Lake City, helps paint a fuller picture of the narrative laid out in an incident report filed by one of the cops after the encounter, which somehow ended with police viewing Petito, 22, as the aggressor. In a previously released 911 call shortly before the officers were dispatched, a witness tells the operator, “We drove by him, a gentleman was slapping the girl. They ran up and down the sidewalk. He proceeded to hit her, hopped in the car, and they drove off.”

Laundrie, Petito’s 23-year-old fiancé, inexplicably returned home to Florida—without Petito—two weeks later. In the report, a copy of which The Daily Beast obtained from the Moab City PD, Officer Eric Pratt wrote, “It appeared that a male and female had left the scene traveling north on Main in a white Ford Transit van with a black ladder on the rear after the male and female had engaged in some sort of altercation. It wasn’t clear, but I believe it was reported the male had been observed to have assaulted the female.”

But after interviewing Petito and Laundrie, as well as contacting the witness who called 911 in the first place, Pratt came to a different conclusion. Petito and Laundrie had “some sort of argument,” he wrote in the report. Laundrie then “tried to create distance” by telling Petito to take a walk and calm down, it says. However, Petito “didn’t want to be separated” from Laundrie, and “began slapping him,” the report continues. The document claims Laundrie grabbed Petito’s face and “pushed her back as she pressed upon him and the van.” The fight erupted over a phone, according to the report.

“No one reported that the male struck the female, both the male and the female reported they are in love and engaged to be married and desperately didn’t wish to see anyone charged with a crime,” says Pratt’s writeup, which goes on to assert that Laundrie “did not exhibit any indicators that he may be a victim of ‘battered boyfriend syndrome,’” and that he was “assessed to be at low risk of danger or harm as a result of his proximity” to Petito.

In bodycam video from the encounter later released by authorities, a second officer can be seen telling Petito that he has “decided not to cite you for domestic violence battery.”

“It was only going to be a Class-B misdemeanor, however the domestic violence portion of it enhances it—makes life a major pain in the butt, especially, you’re 22, right?” he says.

Petito told police she was frightened that Laundrie was going to leave her behind in Moab, according to the incident report. They both suffered from extreme anxiety, the two said. In the end, responding officers declared the incident a “mental/emotional health ‘break,’” rather than a domestic assault, the report concludes.

“I am separating you tonight,” the officer dealing with Petito tells her. “I want you guys both to be tonight, away from each other, relax, breathe… I understand that this can feel like it’s a nightmare, but you’re coming out as the golden flower on top of it all.”

Cops released the van to Petito, who legally owned the vehicle, and arranged a motel room for Laundrie. Officers told Petito where she could take a shower for “four or five bucks,” one of them said to Laundrie as he drove him to the motel.

“I told her to go take a shower… cause she seems a lot like my wife,” the officer said. “And things that really work for my wife is when she gets stressed out, to take a long hot shower.”

The footage concludes with the officer checking Laundrie into a local motel and shaking his hand as he says goodbye.

Petito and Laundrie embarked on a tour of America’s national parks in early July, traveling to the Monument Rocks formation in Kansas, followed by Colorado’s Great Sand Dunes National Park, and the Zion, Bryce, and Canyonlands national parks in Utah. Although the pair’s online postings portrayed their journey as something close to perfect, and others who met them on the road said everything seemed fine, living in such close quarters month after month was beginning to take a toll on their relationship, said the police report.

“The text message read, ‘Can you help Stan, I just keep getting his voicemails and missed calls,’” states a Sept. 15 search warrant giving investigators permission to search a hard drive found in the couple’s van. “The reference to ‘Stan,’ was regarding her grandfather, but per the mother, she never calls him ‘Stan.’ The mother was concerned that something was wrong with her daughter.”

Petito’s phone was subsequently turned off, and she “stopped posting anything on social media about their trip,” according to the warrant. “Per her family, this was not normal behavior for the subject, and they became more worried about her.”

On Sept. 19, Petito’s remains were discovered in Wyoming’s Bridger-Teton National Forest. But from the start, Laundrie refused to speak to investigators. As pressure began to mount, Laundrie himself vanished when he went for a hike at a local nature preserve but never returned, his family reported. Investigators have been searching the 25,000 expanse for any sign of Laundrie, but have so far come up empty.

“Get out of the house, get into the FBI offices, and start answering some questions,” Petito’s father, Joe, told The Daily Beast earlier this month before Laundrie went missing. “Do your job as a fiancé, as most would do.”

“While this warrant allows law enforcement to arrest Mr. Laundrie, the FBI and our partners across the country continue to investigate the facts and circumstances of Ms. Petito’s homicide,” FBI Denver Special Agent in Charge Michael Schneider said in a statement.

On Sunday, FBI agents showed up at the North Port, Florida home Laundrie shares with his parents to collect “personal items” of Laundrie’s to use for DNA matching. Rewards of up to $30,000 have been offered for information as to Laundrie’s whereabouts.