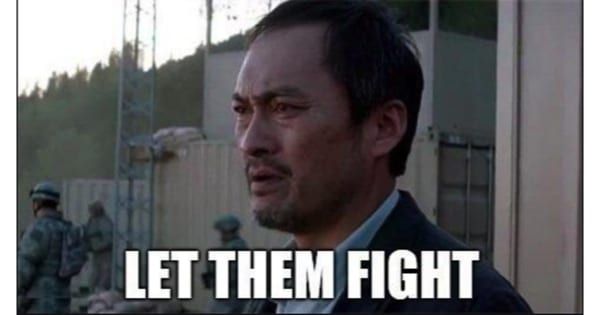 Is anyone tired of the infighting among conservatives over Gov. Ron DeSantis and the Florida legislature stripping Walt Disney World of its self-governing status? We are, but it’s still going. Most conservatives agreed that the Parental Rights in Education bill was a good and necessary thing if a bit vaguely worded. But now DeSantis has signed legislation stripping Walt Disney World. National Review’s Charles C. W. Cooke wrote that there was no need to “salt the earth” and stripping Disney of its self-governing status now was “grotesque.” David French was distressed by the Right’s about-face on free speech. After all, conservatives certainly weren’t cheering on San Antonio for banning Chick-fil-A from its airport due to its “legacy of anti-LGBTQ behavior.” Of course, that battle was for Chick-fil-A to be able to exist at all, not to endow it with special privileges.

Mediaite has a clip from Ben Shapiro’s show warning woke companies to expect a “legislative 2×4.”

.@benshapiro warns “woke” companies to expect a “legislative 2×4” if they push a progressive agenda: “F around and find out!” https://t.co/nSxJAsuCJJ pic.twitter.com/c67YZ9owxG

This is called a pretzel. The weird thing is that Disney tried very hard to stay out of this; and DeSantis only went after them after his law had passed. So pure vengeance. Pure Orban. https://t.co/AKEOFWqpAW

“Pure vengeance.” No, Disney did not try nearly hard enough to stay out of it. They chose a losing battle and lost.

I’m not sure if you simply don’t know the facts or you expect that your readers don’t know the facts. Actually it doesn’t really matter. We’re going to destroy our enemies. That’s our new plan. And we’re not getting talked out of it. https://t.co/zPV2WB0WYy

Christopher Rufo argued you had to make Disney feel financial pain at the hands of consumers:

And let this be a warning to CEOs across America: since the release of internal videos exposing Disney’s plan to inject gender ideology into children’s programming, the company has lost $41 billion in shareholder value. Going woke is starting to look like a risky investment.

The Daily Wire’s Jeremy Boreing, who started his own razor company, says this is the way.

This is how to punish Disney and what to punish them for. https://t.co/7VGau173TF

Both methods are good. Public pressure is essential, but legislation removing special exemptions—i.e., cronyism—is also a legitimate policy. Disney entered politics and threatened to overturn legislation, so DeSantis renegotiated their sweetheart deal with the State of Florida.

The benefit of the DeSantis approach is that it will create countervailing pressure on corporations. For decades, the Right has done their bidding on economics and, consequently, executives believed they could pander to the Left on culture. That calculation has now shifted.

I’m just trying to imagine what folks on the right would say if a liberal politician said they might back off Hobby Lobby if they changed their politics. https://t.co/0FzbcvmInh

The point is Dems go after politically “bad” companies all the time with the tools of government, media, and corporate power, so some conservatives are sick of being the only ones who play by the rules.

Yup. I strongly disagree with the response, but it is unfair to not recognize the problem.

Am I missing something or did I imagine Hobby Lobby having to appeal to the Supreme Court to avoid changing their politics? Little Sisters of the Poor? Jack Phillips? Are we just memory-holing everything Democrats have done to private entities that opposed their edicts? https://t.co/gQZ3XhfJ7Y

Who’s memory-holing what now? What you’re missing, it seems, is that conservatives used to take the position that the government shouldn’t punish corporations for “wrongthink.” Now many celebrate it for one reason or another, including spite. https://t.co/UJ5wm3yrgP

Let’s not memory-hole Masterpiece Cake Shop, then, or Chick-fil-A. Do we want to be the gracious winners in hopes that the Left will decide to change its tactics and treat conservatives in good faith?

It’s really disturbing and childish how so many on the Right want to be warrior badasses and yell burn it all down rather than respect and uphold the constitutionally protected right to free speech for all—even for their political enemies.

Never seen so many people upset over a company being treated the way all the other companies in the state are. Do you get a discount code for their websites or something if you argue against this? https://t.co/rKSoc4GUs9