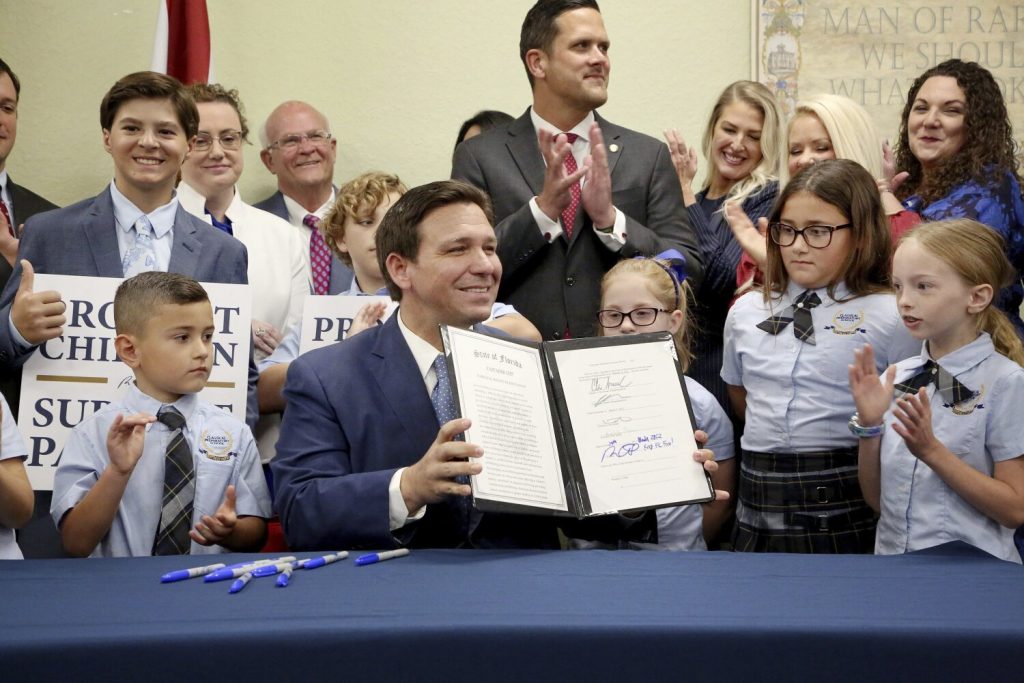 The most intriguing politician in the Republican Party is an uncharismatic governor who’s trying to make the GOP’s culture war appealing to suburban mothers.

Ron DeSantis, the 43-year-old governor of Florida, has been on a tear. Originally a tea party-style fiscal conservative, he’s embraced a series of hard-edged positions that have boosted him into second place in early — OK, way-too-early — polls for the 2024 GOP presidential nomination. (First place is still occupied by former President Donald Trump.)

“He’s taken on the left more aggressively than any U.S. governor in modern history,” Fox News pundit Laura Ingraham enthused last month when she devoted an entire hour of her prime-time program to DeSantis.

“I don’t know if it’s by luck or by smarts, but that guy has a gift for framing issues and finding the right enemies,” said Republican strategist Scott Jennings, a longtime advisor to Senate Minority Leader Mitch McConnell (R-Ky.).

DeSantis broke into national prominence early in the COVID-19 pandemic, when he became the nation’s most powerful opponent of lockdowns and vaccine mandates. Some states, like California, kept schools closed for a full year or more; DeSantis ordered Florida’s schools to reopen in August 2020 and threatened to withhold money from districts that rebelled.

It was something of a gamble. Florida’s death rate from COVID rose more steeply than those of states with tougher regulations. But many parents were grateful that they could send their children to school. Many businesses were grateful too; DeSantis allowed them to remain open.

The governor took the scientific debate over vaccine mandates and turned it into a high-visibility political cause.

The results weren’t as clear as he sometimes claimed; Florida’s economy has grown more slowly than California’s over the last two years. But DeSantis moved on to other targets.

He ordered state agencies to audit businesses to determine whether their workers were in the country legally.

He passed another law limiting what schools can teach about racism and other painful aspects of American history, and launched a state review that banned several math textbooks for purported political content.

And, most recently, he signed a bill banning discussions of sexual orientation and gender identity in the first four years of elementary school, and potentially limiting the subjects in higher grades — the act that opponents dubbed the “Don’t Say Gay” law.

When the CEO of the Walt Disney Co., under pressure from employees, declared that the company would fight to repeal the bill, DeSantis retaliated. He pushed through a bill to strip Disney World, the company’s giant amusement park near Orlando, of its special tax status, which had given Disney broad authority over its holdings.

One is framing: In the governor’s telling, his restrictions on teaching are about parents’ rights, not animus toward LGBTQ rights. The law’s official name is the “Parental Rights in Education Act,” not “Don’t Say Gay.”

Republican strategists believe DeSantis’ description appeals to parents of young children, including suburban parents who voted against Trump in the 2020 presidential election.

A Fox News poll this month reported that 55% of voters said they agreed with a ban on teaching about sexual orientation in the early grades, with even larger majorities among parents and Latino voters.

A second strength is DeSantis’ readiness to attack business leaders when they oppose him. He has denounced not only Disney executives but social media companies as part of a cultural elite whose values are far different from those of his voters.

That’s made some traditional Republicans nervous.

“He’s gone too far in attacking Disney, especially on the tax district,” a GOP lobbyist told me, refusing to be quoted by name. “That could cost him some support.”

It may be worth noting, though, that DeSantis has confined his attacks on business largely to firms not headquartered in Florida — and that Disney World, one of the state’s largest employers, is unlikely to move.

DeSantis’ third quality has been his relentless search for new causes to champion in an expanding culture war.

“Having that sort of feel for timing and when to jump on issues is hard to teach,” Jennings said. “DeSantis clearly gets it.”

That, more than any other factor, has distinguished him from Trump. Since 2020, the former president has seemed stuck in an endless loop of grievances about the presidential election, which he claims (without evidence) was stolen from him.

DeSantis has moved beyond 2020 to define Republicans’ agenda for 2022 — and probably 2024. He has never directly confronted Trump, but he hasn’t needed to. He’s outflanked him.

Whether he intends to run or not, he’s already built the foundation he’d need to seek the GOP nomination. He’s canny, hardworking, relentless and often ruthless — a populist without Trump’s self-defeating flaws.

Democrats should be worried.