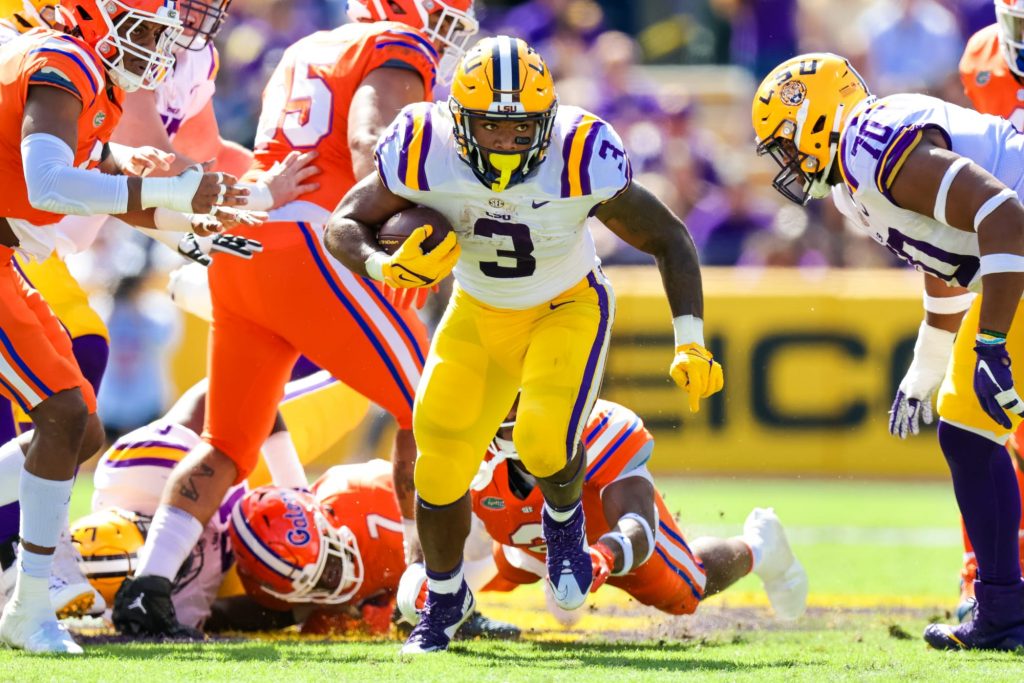 This year’s LSU-Florida game was full of twists and turns for the college football media to freak out of as the Tigers got an upset victory over No. 20, 49-42.

Move over Oklahoma and Texas, LSU and Florida just made their claim to the wildest rivalry game of 2021.

The Tigers and Gators met in Baton Rouge for a back-and-forth shootout that came down to the final minutes.

LSU took an early lead while Florida quarterback Emory Jones found it easier to hit opposing defensive backs than his own receivers. The Gators didn’t let the Tigers get out too far ahead though. They completed a Hail Mary thanks to some horrendous end-of-half defense to keep things close and came alive on offense when Anthony Richardson took over at quarterback.

Tyrion Davis-Price found success on the ground for LSU, scoring three touchdowns while racking up a single-game record 287 yards rushing. That’s the most Florida has ever given up to an opposing running back.

Tigers quarterback Max Johnson found Jaray Jenkins for a touchdown, their third hookup of the game, on fourth-and-goal from the one-yard line with over three minutes left to put LSU on top late.

Richardson threw the fourth interception of the day for Florida quarterbacks to seal the deal for LSU, 49-42.

LSU’s came into its last two match-ups with UF severely depleted, looking like they were headed to getting blown out, and beat the Gators both times.

LSU, a near two-TD underdog, is gonna beat Florida down, like, a dozen starters, with a coach on the hottest of seats by… running the football.

LSU-Florida remains one of the wildest series in college football. https://t.co/GUSIfff02l

LSU in seeming disarray has been a very bad thing for Florida to encounter the past two seasons.

An all-time performance by a guy completely written off.

Gators are done. What a win for Ed Orgeron’s team after all the key injuries. Another shocking victory over Florida.

Absolutely phenomenal effort by the offensive line of LSU and Ty Davis-Price. That was great LSU football.

Ed Orgeron needed that victory to give him a reprieve from the hot seat in Baton Rouge. As for Dan Mullen, the Gators have some things to figure out on defense, but at least they have their quarterback.