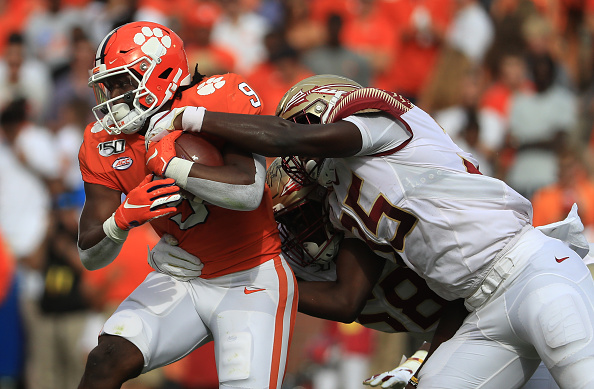 It didn’t take long for Clemson University and Florida State University to silence the chatter of the two storied programs inquiring about moving to the Southeastern Conference and leaving the Atlantic Coast Conference.

Just days after Texas and Oklahoma accepted invitations to leave the Big 12 Conference and join the SEC, rumors swirled about Clemson and FSU contacting the conference about leaving the ACC and joining the SEC as well.

Clemson responded on Monday, shortly after the report first surfaced.

“There is no truth to the report that Clemson University has been in contact with the Southeastern Conference regarding membership,” a Clemson spokesperson told WYFF in Greenville, South Carolina.

“I want to be clear that persistent reports that Florida State has been in contact with the Southeastern Conference are untrue. We have had no communication with the SEC or any representatives of the SEC,” Thrasher said.

The rumors started with tweets like this on Monday.

In a few ways, Clemson and Florida State to the SEC actually makes more sense than Texas and Oklahoma to the southeast. First, there are the geographical differences. Clemson and FSU are clearly in the southeast while Texas and OU are southwestern schools. They do have Texas A&M’s SEC presence to back up UT and OU, though.

Secondly, Clemson and Florida State have played in national title games, and won, in the last 10 years. Florida State won the title in 2013, and Clemson won it in 2016 and 2018 after making the title game following the 2015 season. The Tigers also made the national championship game after the 2019 season, where they lost to LSU. Oklahoma last won a title in 2000, and Texas last won it in 2005. Although each school has made it back to the title game, neither has held the championship trophy more than once this century.

The SEC is the premier conference in college football, winning 12 national titles this century. Since the Longhorns’ title in 2005, the SEC won seven straight national titles and 11 of the last 15, including the last two (LSU 2019, Alabama 2020). LSU also won the title in 2003, beating Oklahoma in the Sugar Bowl.

Then there are natural rivalries. Clemson already plays in-state rival South Carolina of the SEC in an annual non-conference game, and Florida State plays Florida on a yearly basis.

News of Texas and Oklahoma inquiring about SEC entry first broke during the SEC Media Days, and SEC commissioner Greg Sankey shrugged off the Houston Chronicle report as “speculation” by “unnamed people.”

“I’m not going to comment on speculation,” Sankey said at the time.

A Texas spokesperson, at the time, also said they wouldn’t comment on speculation.

“Speculation always swirls around collegiate athletics. We will not address rumors or speculation,” they told the Chronicle.

Rumors and speculations quickly turned into truths, votes and a seismic shift in college football, creating a 16-team monster conference.

Oklahoma and Texas’ admission to the SEC has caused a major ripple effect in college athletics. The remaining eight teams in the Big 12 have to consider their respective future paths while the Big Ten and Pac-12 conferences have begun exploring their options to stay in the arms race for money with the SEC.

Here’s an example of “reports” swirling around college athletics.