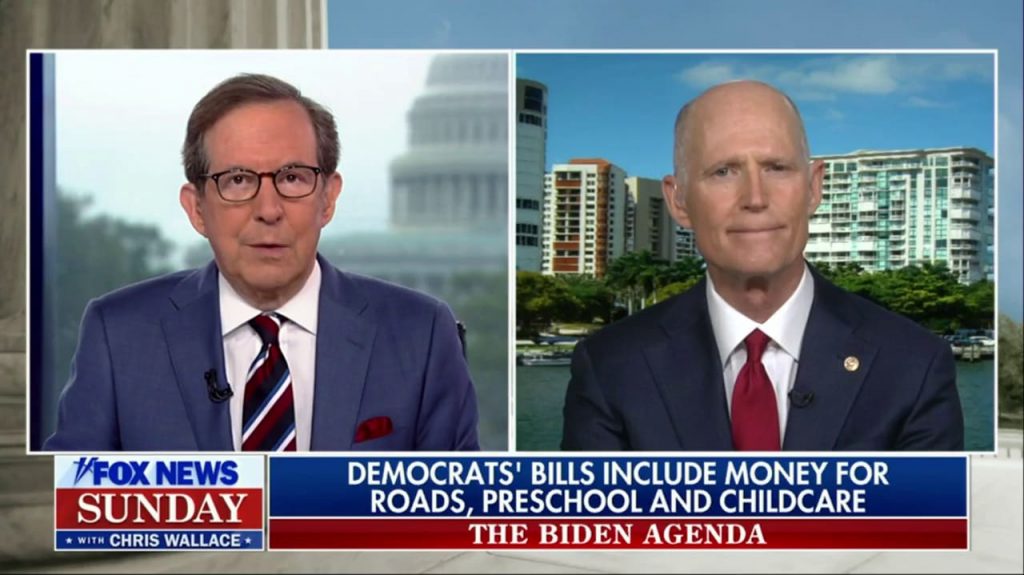 Fox News anchor Chris Wallace repeatedly pressed Sen. Rick Scott (R-FL) over his supposed concerns about the national debt and deficit, asking the Florida lawmaker if he would support repealing the 2017 Trump tax cuts to help balance the budget.

With Republicans uniformly opposed to the Biden administration’s Build Back Better social spending agenda, Wallace welcomed Scott onto Fox News Sunday to react to the growing possibility that Democrats may finally pass a pared-down version of the bill.

Prior to Wallace’s interview with Scott, for instance, Transportation Secretary Pete Buttigieg expressed optimism that the latest framework of the massive spending proposal would have support from both progressives and moderates within the Democratic Party. Scott, meanwhile, defended his opposition to the package, citing his belief that government spending is to blame for inflation.

Wallace would then bring up the fact that Scott, besides opposing the Build Back Better bill, also did not vote for the bipartisan infrastructure package that passed the Senate with a healthy majority. Noting that the infrastructure package would provide funds to repair thousands of miles of Florida’s roads, the Fox anchor wondered aloud why Scott voted against the bill when 19 Republican senators supported it.

“But that’s what this bill has in it, sir,” the Fox News Sunday moderator said.

Scott went on to tout his record as Florida governor, saying he was able to balance the state’s budget and pay down Florida’s debt. At the same time, he alleged that the infrastructure bill isn’t paid for and would not only contribute to inflation but also add to the national debt.

“I’m not going to bankrupt this country. This country has almost $30 trillion worth of debt and that bill by itself was a quarter of a trillion dollars of debt. This has got to end,” he exclaimed, adding that the federal government has got to “live within our means.”

Dodging the veteran Fox anchor’s question, the senator once again referenced his past experience as governor, saying he cut taxes and fees during his time running the state. “We need lower taxes,” he added.

“Sir, respectfully, when Donald Trump was president, you had a tax cut which added $2 trillion to the deficit according to the CBO and you didn’t have the commensurate spending cuts,” Wallace pushed back. “So the question is if you are not going to have the spending cuts, should you repeal the tax cuts if that debt and deficit are so vital?”

Scott once more deflected Wallace’s direct query, insisting that he’s “not raising anyone’s taxes” and he wants to “watch how we spend our money.” He also repeated his line that the government’s “got to figure out how to live within our means” and continued to boast about balancing Florida’s budget as governor.